A LETTER TO GOD

Answer: Lencho had hoped that rain would come. This will help the crop of his field.

Answer: Lencho was confident that rain would be good for his crops. The harvest would be good and he would be able to sell it to generate money for him. Hence he said that larger drop of rain was equal to ten cent coin and smaller drop was equal to five cent coin.

All the corn in his field was destroyed. All the flowers had fallen flat on ground. The whole field was looking white as if covered with salt.

Answer: Lencho felt very disappointed. He realised that all his hard work of growing crop had become a waste. Now they will not have corn for the year. They will have to remain hungry for the year. He was very much worried.

Answer: Lencho had a great faith in God. He believed that God sees everything even if it is deep in his conscience. God helps those who are in need of help.

He wrote a letter to God requesting him to send him 100 pesos. He needed this money to once again sow his field and for survival of his family. He did not know address of God. He wrote ‘To God’ on the envelope and put it in the letterbox.

Answer: Initially postmaster laughed after reading the letter. Later he became serious and decided to keep faith of Lencho in God. The postmaster collected small amounts of money for employees of post office. He collected money from his friends also for the charity. In all he could collect 70 pesos. He sent this money to Lencho through a letter from God.

Answer: No, Lencho was not surprised to find a letter with money in it. He had a confidence and faith that God will reply to his letter

Answer: Lencho had requested God to send him 100 pesos. But the letter had only 70 pesos. He was confident that God had sent him 100 pesos but the employees of post office had taken out 30 pesos.

Answer: The postmaster did not want to shake faith of Lencho in God. So he collected money from employees of post office and his friends and sent to Lencho.

He signed the letter ‘God’ because he wanted Lencho to believe that money was sent by God.

Answer: Lencho had complete faith in God. So he was sure that the money was sent by God. Therefore there was no need for him to find out who had sent money.

Answer: Lencho thinks that employees of post office have taken the balance money.

Postmaster and employees of post office had contributed and collected money for Lencho. In spite of their goodwill and efforts to help, Lencho thinks that post office people have taken out some money. This is the irony of the situation.

Answer: In real life people like Lencho do not exist. He was literate person still he wrote a letter to God. People do have faith in God and pray to seek his help. But nobody writes a letter to God.

Lencho was a naïve person.

Answer: Lencho had sowed his fields. He was expecting rain for a good harvest in the field. This was necessary for his family to survive. One day it started raining and the family was happy. But soon the rain turned into a hailstorm. All the crop was completely destroyed. This represent conflict between human and nature.

Lencho had written a letter to God requesting him to send 100 pesos. Instead of address on the envelope, he wrote ‘To God’. The postmaster opened the letter and read its contents. In order to keep the faith of Lencho intact, he made efforts to collect money. He could collect 70 pesos which he sent to Lencho. But Lencho thought that the post office people had kept balance money. In his next letter to God he called them crooks. This is the conflict between human themselves.

Answer – I often go to Mumbai which is the commercial capital of India.

Answer – My mother, who cooks very well, is going to host a TV show on cooking.

Answer – These sportspersons, whose performance has been excellent, are going to meet the President.

Answer – Lencho prayed to God whose eyes can see into our minds.

Answer – This man, whom I trusted, cheated me.

Answer – Not a leaf remained on the trees.

Answer – It was nothing less than a letter to God.

Answer – Never in his career as a postman had he known that address.

Answer: These are very fine particles of ice formed due to severe cold. When they are very tiny, these are referred as ‘dust of snow’. The poet was in a sad mood. Suddenly some quantity of dust of snow fell on him. Its cold and soft touch changed the mood of poet. 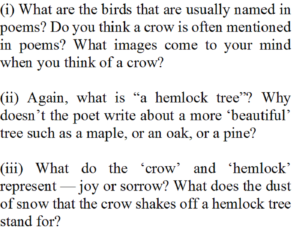 Answer: Normally birds like cuckoo, mynah, peacock, parrot etc are symbolically used in poems. These are the birds of happiness. In this poem poet has made reference to a crow which represents sorrow.

Pine trees, Oak trees and other flowery plants are used in poems. These plants represents beauty of nature and fragrance. The hemlock tree is a poisonous tree. Use of this tree in the poem symbolizes that the poet is fed up of this world.

Dust of snow represent freshness, happiness and pleasure. Mood of the poet changes to happy from sadness. Poet wants to say that we can look for happiness even in sad situations.

Answer: Students should write this based on their own experience and discussion in the class. Some of the situation could be

Answer: The world will definitely end one day. That day could be very far away or it may come sooner.

If the Sun gets very hot and bursts, inhabitants and vegetation will not be able to tolerate such high temperature. Everything may start wilting and melting or there could be fire all over the world. Such situation will cause total destruction of Earth.

If the Sun goes colder gradually, inhabitants and vegetation will be able to survive for some time. With passage of time, it may become so cold that everything will freeze. In such situation there will be no life on Earth.

Answer: The rhyme scheme of the poem is abaa bcbcb. The poet has very precisely brought the difference between desire and insensitivity. He has equated these to fire and ice.

He says that extreme heat and extreme cold can bring end of life on the earth. He draws a similarity and stresses that unending desires and insensitivity is equally disastrous to the society and world. The world can come to an end because of these wrong emotions.