2.  Which word in the above extract means ‘surprise’?

Answer: He went there to lodge a complaint about loss of necklace.

4. Why was the reward offered?

Answer: The reward was offered to find the necklace.

1. From where was ‘she’ coming just before the event mentioned in the extract?

Answer: Matilda was coming out of the party.

2. Which word in the above extract is antonym of ‘modest’?

Answer: They were going to their home.

4. What was the price of the ball costume?

1. Who had organized the party being referred to in above extract?

Answer: The party was thrown by the minister of Public Instructions.

Answer: She wore a necklace. She borrowed it from her friend.

3. Which word in the extract is synonym of ‘decorate’?

4. Who is listener of above extract?

1. What was profession of her husband?

Answer: Her husband was a petty clerk in Board of Education.

2. What did she suffer from?

Answer: She suffered from poverty of her apartment, the shabby walls and worn chairs.

3. Which word in the extract is synonym of ‘endlessly’?

1. Why her husband thought that she would be happy?

Answer: The invitation was for a party and she liked going to party. So her husband thought that she would be happy?

2.  Why did Matilda throw invitation?

Answer: She did not have a good dress so she did not want to go to the party. Hence she threw the invitation.

3.  Which word in the extract is the antonym of ‘respectfully’?

Answer: At the residence of minister of Public Instruction

Answer: The loan they had taken.

2.  Who is speaker of these lines?

3. What was returned and to whom?

Answer: The necklace was returned to Mrs. Forestier

4. Which word in the extract means ‘satisfied’?

(i) Who is ‘she’ in the above extra and why is she vexed.

Answer: “she” refers to Matilda. She was vexed at her poverty.

(ii) who did she respond to?

Answer: She had responded to her husband.

(iii) What is speaker’s concern?

Answer: She did not have a good dress to wear in the party

(iv) Which word in the extract is synonym of ‘anger’? 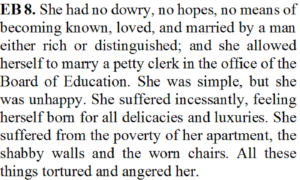 (i) Which of the following she had?

(ii) Which of the following feelings ‘she’ did not have?

(iii) Which of the following is true about her house?

(b) it had shabby walls

(c) it had worn out furniture

(iv) Which word in the extract mean ‘non stop’? 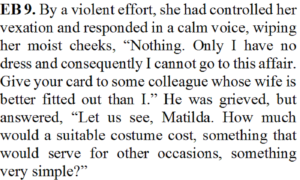 (i) What was the cause of vexation of Matilda?

(a) she had a clam voice

(b) she did not have a suitable dress

(d) the card was unsuitable

(ii) What did Matilda recommend to her husband?

(b) to return the card

(c) to give the card to somebody else

(d) she did not recommend anything

(iii) What did her husband asked Matilda about the dress?

(a) How much a new dress would cost

(b) Something that would serve for other occasions as well

(c) Something that would be very simple

(iii) An expression ‘cannot go to this affair’ has been used in the extract. Which ‘affair’ does it refer to?

Based on the above extract, please classify following as facts and opinion 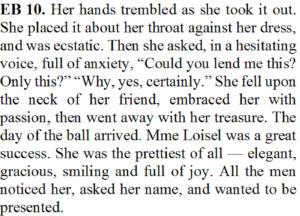 (i) ‘She placed it about her throat against her dress,’. Who is referred to as ‘she’ in this line?

(c) The organizer of the ball

(ii) ‘then went away with her treasure’. What is referred to as ‘treasure’ in this line?

(c) a string of pearls

(iii) Which of the following emotions was not expressed by Mme Loisel in the above extract?

(iv) Which word in the extract mean ‘sure’?

(vi) Which of the following is not true about Mme Loisel at the party? 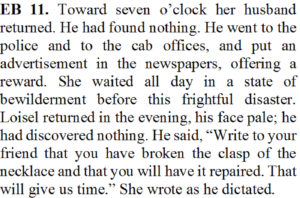 (i) Which of the following was not done by Loisel to fond necklace?

(a) went to police station

(b) went to cab office

(c) put up an advertisement in newspaper

(ii) Where did Mrs. Loisel search for the necklace ?

(b) in her dressing table

(c) under the bed

(iii) Which of the following Mrs. Loisel not write in the letter to her friend?

(a) I have broken the clasp of the necklace

(b) I will get it repaired

(c) It will give us some time

(iv) An expression ‘in a state of bewilderment’ has been used in the extract. Which of the following is not the correct use of the phrase ‘in the state of’?

(a) in a state of amazement

(c) in a state of happiness

(v) Based on the above extract, please classify following as facts and opinion

Answer: She had danced with enthusiasm.

She was the prettiest of the woman, elegant, gracious and full of joy.

All men noticed her, asked her name and wanted to be presented.

This victory was complete and sweet to her heart.

Answer: Mrs Loisel looked old now. She had become a strong, hard and crude woman of poor household. Her hair were badly combed and clothes were awry. She spoke in loud tone and was fully occupied in odious works of her house.

Answer: After the party, her husband threw a modest wrap on her shoulder. This shawl was a clash with her dress. Other ladies were wearing expensive shawls of fur. She had inferiority complex on comparing her shawl with that of others. So she left the party quickly.

Answer: During the party she had lost the necklace which she had borrowed from her friend. To buy a new necklace as a replacement, they borrowed a huge sum of money. To repay the loan, they had to change their life style.

Answer: She wanted to wear good dress and look gracious. She did not have good dress to wear at the party. She thought that it would be better not to go to party. She was unhappy about not being able to go to the party.

Answer: Mr. Loisel had saved four hundred francs. He was saving money to buy a gun. He wanted to go for hunting with his friends.

Answer: Matilda was a very charming lady. She wanted to lead a pleasant and comfortable life style. But she was born in a poor family and married to a poor clerk.

Hence author says that she was an error of destiny.

Answer: Matilda always thought of having good clothes, rich life style and jewels. But these things were beyond her reach. When she visited her rich friend, she became aware of her modest living. This made her unhappy. Hence she did not want to visit her rich friend.

Answer: Initially Mr. Loisel requested his wife to wear a dress she used to wear while going to theatre. But she refused this. Then Mr. Loisel gave her four hundred francs to buy a new dress.

Answer: This statement was given by Matilda when Loisel asked her what a new dress would cost.

Matilda wanted to say that she would be able to buy a new decent dress in four hundred francs.

Answer: Matilda belonged to a modest family. They received an invitation for a party. She did not have a good dress to wear at the party. Her husband gave his savings to her for new dress. She borrowed a jewel from her friend.

She enjoyed the party but she lost the jewel. They tried to search for it but could not find. They decided to replace it. They had to borrow a huge amount from usurers at high interest.

In order to repay the amount, they had to change their life style a lot. They had to move to an attic. Mr. Loisel started doing some part-time jobs also. Matilda started doing all odious works of house. She had to haggle a lot for buying supplies.

The carelessness of Matilda forced such a big change in lifestyle. It took them long 10 years to come out of the debt.

Answer: Matilda belonged to a modest family. But she aspired to lead a life of pleasure and comforts. She was very well aware that these were beyond her means.

In spite of this she always dreamt about behaving like a rich person. She wanted to wear best clothes. She wanted to have the best furniture and utensils in her house. She was not happy with her house as well.

She did not make any efforts to increase her income or to save money to fulfil her dreams. Hence she was a discontented person. She wanted to present herself what she was not. She also did not have the courage to tell the truth. If she had avoided these two shortcomings she would have been a better person.

Thus it is because of her attitude that she landed into a deep trouble in her life.

Answer: Mr Loisel knew that Matilda liked to go to parties. So he very happily shared the invitation for the party with his wife. But his wife refused to go to the party. He lovingly enquired the reason. He gave her four hundred francs to buy a new dress. This money he had saved to pursue his hobby. He guided his wife to borrow a jewel from her friend.

He patiently waited at the party for her wife to enjoy fully. While coming out of the party, he put a wrap on her shoulders to protect her from cold.

He did not get angry at the loss of necklace. He suggested how to handle the situation with Mrs. Forestier. He borrowed money at very high interest to replace the necklace. He did some extra works to repay the loan.

Every time he supported his wife. So we can infer that he loved his wife.