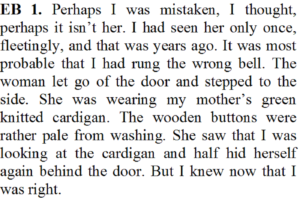 (i) Which of the following doubts the author had about the lady of the house.

(ii) What was the colour of the cardigan?

(iii) Why did colour of button of cardigan fade?

(b) due to washing

(b) things placed in the house

(d) at the name plate

(v) Based on above extract please classify following as facts or opinion. 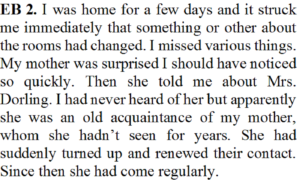 (i) What did the narrator notice at her home?

(a) something or the other had changed

(b) various things were missing

(ii) Why was the mother of author surprised?

(a) her daughter did not inform about her visit

(b) her daughter got angry

(c) her daughter quickly noticed the changes at the house

(d) her daughter had gained weight

(iii) Which of the following is true about Mrs. Dorling?

(iv) A phrase ‘she was an old acquaintance’ has been used in the extract. Which of the following expressions does not convey the same meaning?

(a) she was an old buddy

(b) she was an old friend

(c) she was an old colleague

(v) Based on above extract please classify following as facts or opinion. 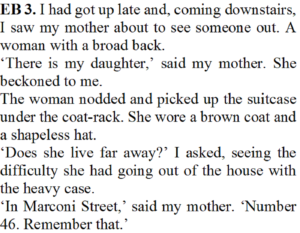 (i) Why did mother introduce her daughter to the woman?

(a) they were seeing each other for the first time

(b) author was not bothered to meet the woman

(c) author had just woken up

(d) the woman was in hurry to go

(ii) Author noticed which of the following things about the dress of the woman?

(iii) Why did author asked her mother how far did the woman live?

(a) the woman was carrying many things from the house

(b) the woman was facing difficulty in lifting the suitcase

(iv) Why mother wanted her daughter to remember the address of the woman?

(v) The phrase ‘to see someone out’ has been used in the extract. Which of the following does not have the similar meaning?

(a) to see someone off

(b) to say someone good bye

(c) to keep someone off

(d) to send someone off 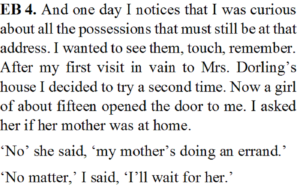 (i) Which address the author is talking about?

(a) address of her own

(b) address of her mother

(ii) Which possessions the author is talking about?

(a) thing at the house of her mother

(b) things owned by herself

(d) things stolen from her

(iii) For whom did the author want to wait?

(a) For Mrs. Dorling

(b) for her mother

(c) for the mother of the girl

(iv) The expression ‘my first visit in vain’ has been used in the extract. Which of the following is an incorrect use of the phrase ‘in vain’?

(a) my first attempt was in vain

(b) my first jump was in vain

(c) my first computer was in vain

(d) my first request was in vain 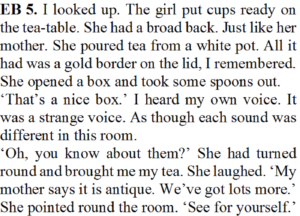 (i) What similarity did author noticed in the girl and that of her mother?

(b) similar broad back

(ii) How did author recognize the tea opt?

(a) by its colour

(b) by the shape of the lid

(c) by the gold border on the lid

(d) by its weight

(a) it looked beautiful

(b) it had nice paint on it

(c) author had recognised it

(d) these word were merely a compliment

(iv) How did the girls know that those things were aniques?

(a) she was knowledgeable

(b) her mother had told her

(c) author had taught her

(d) author’s mother had informed her 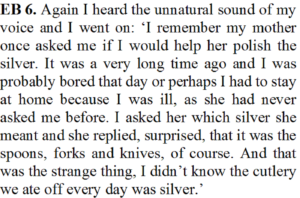 (i) ‘if I would help her polish the silver’. What does the word ‘silver’ refer to

(ii) Why sound of the author was unnatural?

(a) she had a sore throat

(b) she intentionally distorted her voice

(c) she was trying to recall certain past events

(d) mother had asked us to speak unnaturally

(iii) Which of the following items of cutlery is not mention in the extract?

(iv) Which of the following is not mentioned by the author about silver? 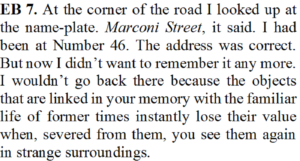 (i) Where was the name plate of Marconi Street put up?

(a) at the edge of the road

(b) at the corner of the road

(c) at the front of the house

(d) at the far end of the road

(ii) How did author convince herself that she had come at the right address?

(a) she had looked at the number of the house

(b) she had looked at the colour of the house

(c) she had looked at the name of the street

(iii) Why did she not want to remember the address?

(a) she did not want to go there again

(b) she had a poor memory

(c) name of the street was already displayed

(d) number of the house was already displayed

(iv) Why did author not want to go back there again?

(a) she noticed her own thing there

(b) her own things had lost their importance for her

(c) the surrounding was unfamiliar

(d) her former life was still in her memory

(v) Which word in the extract has been used as antonym of ‘at once’?

Answer: Mrs. Dorling behaved as if she had not recognized the narrator. Then she asked if they had come back. The narrator replied that she had come alone. Mrs. Dorling refused to meet her and closed the door.

Answer: Mrs Dorling was wearing a green cardigan. That belonged to her mother. At the name plate of the house ‘Dorling’ was written. At the jamb of the door ‘Number 46’ was written. The corner of the street had a nameplate of Marconi Street.

These confirmed that she had come to the right address.

Answer: Narrator observed the living room of Mrs. Dorling. It was not a room of her own house.  Almost everything in the room was familiar to her because once those things belonged to her. But these were not arranged properly.

Thus she made the statement.

Answer: The narrator had recognized the woollen tablecloth. She found out the burn mark on it. The girl was surprised. At that time narrator made the statement.

She wanted to say that we remember things when these are away from us. Otherwise we take these for granted.

Answer: The table cloth looked familiar to her. In order to confirm she started searching for the burn mark. She finally found the mark. Thus she was convinced that it was their own table cloth.

Answer: Initially she wanted to look at and feel things her mother had possessed. Soon she realised that these reminded her of old days and of her mother. She did not want to recall her old memories and become emotional.

So she did not wait to meet Mrs. Dorling.

Answer: The narrator had become curious about things that belonged to her mother. She wanted to see them, touch and remember. She was not allowed to enter the house during her visit. Therefore she decided to try a second time.

Answer: The narrator introduced herself as daughter of Mrs. S. Mrs. Dorling had recognized her. But she did not allow narrator to enter her house.

Answer: The narrator reasoned to herself that when you see your old things at a different place it hurts you. These would remind you about people who are no longer with you. She did not want to recall her old life.

Thus she resolved to forget the address.

We get so used to things in our possession that we hardly ever give importance to these. But after losing those, we realise our emotional attachment with those.

We understand from this that Mrs. Dorling had a sharp memory. She remembered Mrs. S. She also remembered that Mrs. S had a daughter.

Mrs. Dorling argued with herself that the narrator might ask for return of things she had taken from house of her mother. Thus we can say that she had the ability to foresee turn of events. It also tells us that she had a materialistic attitude about life.

Mrs. Dorling was a determined lady. Quite firmly and politely she refused entry to narrator into her house.

Thus Mrs. Dorling appeared to be a lady having sharp memory, materialistic attitude and firm resolve.

Answer: In my opinion the title of the text is justified.

Initially the mother advises the narrator to remember the address of Mrs. Dorling. Mother had not asked Mrs. Dorling to keep things to herself. Thus probably she thought that someday her daughter would be able to take back things from Mrs. Dorling.

Towards end of the story, the narrator resolves to forget the address.

Thus we see that the story has given prominence to the address of the house. Hence the title is justified.

Answer: The door was opened by Mrs. Dorling’s daughter. Mrs. Dorling was doing an errand at that time. The girl allowed narrator to come in and wait for her mother.

Narrator told the girl how she understood that crockery at their house was made of silver. Narrator asked the girl if she was aware about the cutlery she had. The girl opened the drawer to have a look at things stored there. Narrator recognised that those too belonged to them.

Narrator felt that she was in a room that she knew and also did not know. Finally she decided not to remember her old thing and old times. She hurriedly walked out of the house. She did not wait for Mrs. Dorling to return.