1. Identify the poem and the poet.

2. From where the traffic was coming?

Answer: The traffic was coming from city.

3. Where was the ‘new shed’ constructed?

Answer: It was constructed in front of the house and along the edge of the road.

4. Which poetic device is used in ‘ The little old house was out with’?

Answer: Alliteration. The letter ‘o’ has been repeated.

5. Which word in the extract mean ‘requested’?

1. What is meant by ‘The flowers of cities’?

Answer: It refers to people living in cities.

2. According to extract what support the life?

Answer: The flow of money or cash supports life.

3. Why did villagers make a shed?

Answer: They made shed to sell certain items and earn some money.

4. Which poetic device is used in ‘flowers of cities’?

5. Which word in the extract mean ‘unconscious?

1. Did vehicles want to stop at the shed?

Answer: No. They wanted to move ahead.

2. Why did vehicle find that landscape is marred?

Answer: The shed was constructed in a bad manner. It did not match with its surroundings.

3. Which word in the extract mean ‘ugly’?

4. What was the focus in the mind of travelers?

Answer: The destination of journey was the focus of travelers.

1. In your opinion why N and S were turned wrong?

Answer: The villagers were not literate people.

Answer: Repetition. Two words ‘turned’ and ‘wrong’ have been repeated.

3. Of what material container of wild berries made of?

4. Which word in the extract is antonym of ‘purchase’?

1. Why author feels that travelers could be mean?

Answer: Traveler may not like to spend money or they may start bargaining.

2. When is the shopkeeper disappointed?

Answer: When people do not buy anything from his shop, he is disappointed.

3. Does the shopkeeper express his complaint?

Answer: No. He does not express himself.

4. Which poetic device is used in ‘You have the money, but if you want to be’?

Answer: Repetition. The word ‘you’ has been repeated.

1. Is the roadside stand close to city?

Answer: No. It is quite far from city.

2. Why the shed has been made?

Answer: It has been made to earn some money.

3. Which poetic device has been used in ‘Here far from the city’?

Answer: Alliteration. The letter ‘f’ has been repeated.

4. Which word in the extract is synonym of ‘cash’?

Answer: To the villagers.

2. What does the word ‘expand’ mean in above extract?

Answer: It refers to the government.

4. Which poetic device has been used in ‘the party in power is said’?

Answer: Alliteration. The letter ‘p’ has been repeated. 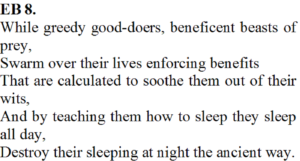 1. Why do ‘greedy good-doers’ help villagers?

Answer: They help villagers to get benefits for their own. They are not interested in helping villagers.

2. Which poetic device is used in ‘how to sleep they sleep all day’?

3. Why their ancient way of sleep is destroyed?

Answer: They are forced to adopt new life style. Hence their old habits are changed.

4. What is the meaning ‘soothe them out of their wits’.

Answer: They are fooled or deceived.

1. What is their prayer?

Answer: They pray for a vehicle to stop and buy things from them.

2. Why the cars are called selfish?

Answer: Most of the cars would sped past their shops. The travelers are not bothered about needs of shed owners. Hence cars are called selfish.

3. Among those who stop, what do most do?

Answer: They enquire about price of things,

4. Which poetic device is used in ‘the sound of selfish car’?

1. Do villagers earn enough money from sale of things?

Answer: No. It is not enough.

2. What poetic device is used in ‘in country money, the country scale gain’?

Answer: Repetition. The word ‘country’ has been repeated.

3. How does the narrator want to provide relief?

Answer: The narrator wants to solve their all problems in one go.

4. Which word in the extract mean ‘thinking’?

Answer: The sound of brake of a vehicle means that the vehicle is going to stop. Thus it gives them a hope that some of their goods would be sold.

Hence they want to listen to ‘squeal of brakes’ .

Answer: Shrewd businessmen fool them and shift them to cities. They buy the rural land for their own benefit. Government is not giving due attention to them. The villagers continue to live in poverty.

Hence poet has sympathy towards them.

Answer: People travelling in vehicles are more concerned to reach their destination. Even when they look outside , the sheds are perceived as a spot on landscaping.

Thus they do not stop.

Answer: Villagers have made their shops along the road side. People travelling from city to another place are their likely customers.

Answer: It refers to those people who promise to do good for the villagers. But actually their motive is to earn profit for themselves and become more rich.

Hence the poet has used the term ‘greedy good-doers’.

Answer: Villagers think that many cars would stop in front of their shop to buy articles to help them earn money. But the reality is away from their wish. Hence it is called ‘childish longing’.

Having such a desire leads to disappointment among them.