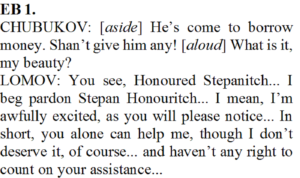 1. Why did Lomov come to Chubukov’s house?

Answer: Lomov had come there to propose his marriage with Natalya.

2.Why Lomov is not able to speak complete sentences?

Answer: Because he is very excited about the proposal.

3. Which phrase in the extract mean ‘to depend upon’?

Answer: To count on

4. What suspicion Chubukov has?

Answer: Chubukov suspects that Lomov has come to borrow some money.

1. Who is listener of the above extract?

2.What has been the continual desire of Chubukov?

Answer: He wanted to marry his daughter Natalya to Lomov.

3. Which word in the extract is antonym of ‘devil’?

4. Did Chubukov really love listener of the extract as his son?

Answer: No, he did not love Lomov.

2. What did the speaker drink?

3. What kind of life the speaker wants to lead?

Answer: He wants to lead a quiet and regular life.

4. What is the age of the speaker?

1. Who is speaker of the above extract?

2. Who is the listener of above extract?

3. Which word in the extract is synonym of ‘for ever’?

4. What did peasant do in return of use of Meadows?

Answer: They made bricks for aunt’s grandmother of Lomov.

2. To what does the word ‘they’re’ refer to in above extract?

3. Which phrase in the extract mean ‘to wear’?

4. To whom does the word ‘you’ refer to in above extract?

1. Write name of the dog referred in the above extract?

2. Who is speaker of the above extract?

3. Write name of the dog owned by the speaker of above extract?

4. Which word in the extract is antonym of ‘virtues’?

2. What does the speaker say about weather?

Answer: Natalya said that weather was wet yesterday but it was splendid now.

3. Why is speaker worried?

Answer: She is worried because her hay may rot due to bad weather of yesterday.

4. Who word in the extract is synonym of ‘happy’?

1. Which land is being talked about in the extract?

2. Who is speaker of the extract?

3. Which word in the extract mean ‘rude’?

4. According to speaker what is ‘not at all neighbourly’?

Answer: Giving back her own land is not at all neighbourly.

2. Who is being referred as ‘he’ in the above extract?

Answer: The dog Guess is referred as ‘he’.

3. Who is the owner of the Squeezer?

4. What was considered a fair price for Squeezer.? 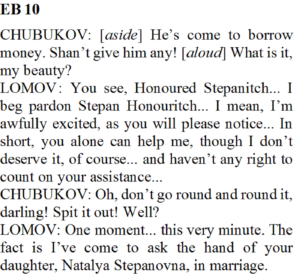 (i) What does Chubukov not want to give to Lomov?

(a) his daughter’s hand in marriage

(ii) Which of the following is not told by Lomov to Chubukov?

(a) I am awfully excited

(b) I beg your pardon

(d) You alone can help

(iii) Which of the following is not told by Chubukov to Lomov?

(b) What is it my beauty

(c) Don’t go round and round

(iv) An expression ‘I’m awfully excited’ has been used in the extract. Which of the following is incorrect use of ‘I’m awfully’ 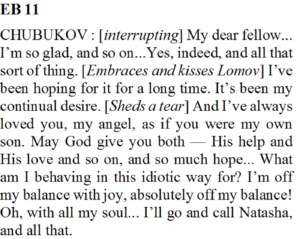 (i) Which of the following expression has not been used by Chubukov for himself?

(d) What am I behaving in this idiotic way for?

(ii) Who is present with Chubukov while above extract is spoken?

(iii) Why did Chubukov shed a tear?

(c) Something fell in his eye 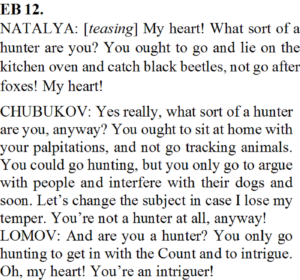 (i) Which of the advice is not given either by Natalya to Lomov?

(a) To go and lie in the kitchen

(b) To catch black beetles

(c) Not to go tracking animals

(d) Not to go after foxes

(ii) Which of the following advice is not given by Chubukov to Lomov?

(b) Not to go tracking animals

(c) To change the subject

(d) To argue with people

(iii) Which of the following allegations are made by Lomov on Chubokov?

(a) You are an intriguer

(b) You go for hunting to get in touch with Count

(iv) An expression ‘What sort of a hunter are you?’ has been used in the extract. Which of the following is not a correct use of phrase of ‘what sort of’?

(a) What sort of a singer you are?

(b) What sort of an orator you are?

(c) What sort of graceful you are?

(d) What sort of a professional you are? 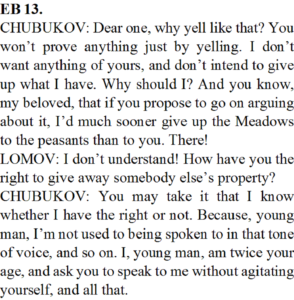 (i) Which Meadows being referred to in the above extrcat?

(ii) What does Chubokov threaten to do with the property being discussed about?

(a) Give it to Lomov

(b) Give it to Natalya

(c) Give it to peasants

(d) Give it to Count

(iii) Which of the following is not told by Chubokov to Lomov?

(a) I do not want anything of yours

(c) I am not used to being spoken in that tone

(d) Speak to me without agitating yourself

Answer: Lomov is a land owner. He is about 35 and still a bachelor. He is neighbour of Chubukovs.

He had gone to the house of Chubukov to propose his marriage with Natalya.

Answer: He suffers from palpitation. He is easily excitable and gets easily upset. When he begins to sleep, he feels pain in his left shoulder and head. He gets up, walks a bit and tries to sleep again. This may happen twenty times.

Answer: He was very happy to listen to the proposal. He said that he was hoping for it and it was his continual desire. He further said that he loved Lomov just like his own son.

Then he went out to call Natalya to meet Lomov.

Answer: He had turned 35 which he considered a critical age for marriage. He was suffering from palpitation of heart and other problems while trying to sleep. He wanted to lead a quiet and regular life.

Hence he decided to get married.

Answer: Natalya said that Guess is old and as ugly as a worn out cab-horse. Its pedigree is not known.

While Squeezer is a young thoroughbred, much better on points and pedigree. She said that Squeezer is hundred times better than Guess.

Answer: Lomov said that Guess is the best dog though it has become lame.

While Squeezer is overshot hence a bad hunter. He said that dogs like Squeezer can be found at every bush.

In a race Squeezer was left behind while Guess ran neck to neck with count’s dog.

Answer: Lomov was nervous and hesitant to express himself. He tried to initiate discussion for the proposal. But he diverted to another topic which resulted in verbal duel between Lomov and Natalya. Lomov walked off the house without making a proposal.

Answer: The title of the lesson ‘The Proposal’ is very much justified.

Lomov was neighbour of Chubukovs. He was 35 and suffering from various ailments. He wanted to lead a quiet and regular life.

He went to Chubukovs to propose Natalya. He was hesitant in expressing himself. Chubukov prompted him to express himself. Chubukov was happy to hear about the proposal and assured Lomov that Natalya would also accept it.

Lomov instead of talking to Natalya about the proposal, got into an argument over Oxen Meadow. Lomov got so disappointed that he walked off. When Chubukov told Natalya that Lomov wanted to make a marriage proposal, she asked her father to call back Lomov.

This time also Lomov is not able to express himself to Natalya. They indulge into another argument about their dogs.

Finally Chubukov prompts Natalya and Lomov to accept the proposal.

Thus we can see that the whole play revolves around the proposal and its acceptance. Hence the tile is justified.

Answer: In this play Lomov wants to make a marriage proposal to Natalya. Her father Chubukov is happy to hear about it.

Lomov and Natalya get into an argument over ownership of Oxen Meadows. They hurl abuses against forefathers of their families. Lomov gets disappointed and walks off.

When Natalys comes to know that Lomov had come to make a marriage proposal she asks her father to call back Lomov. And lomov does come back.

This is the first evidence that arguments cannot not help anyone. While understanding good intentions has a profound effect.

Later, once again all of them get into a verbal duel about their dogs. The situation become very aggressive. Another evidence that arguments do not help anyone.

Finally Chubukov reminds Natalya and Lomov about the proposal. They accept each other and get married.

Hence arguments and disputes cannot solve a problem. Acceptance paves the way for harmony and happiness.

Answer: In this play Lomov wants to make a marriage proposal to Natalya. Her father Chubukov is happy to hear about it. Natalya too wanted to accept the proposal.

On that day, when Natalya first met Lomov, she was not aware of the purpose of Lomov’s visit. Lomov did not express his proposal. During their talks they started an argument over Oxen meadows. Lomov got disappointed and walked off without telling Natalya about the proposal.

When Natalya came to know about the purpose of Lomov’s visit, she asked her father to call back Lomov. Now all the three are aware about the proposal. But they again start a verbal battle.

The main purpose was lost on both occasion.

In the first instance itself Chubkov should have informed Natalya about the purpose of Lomov’s visit. Chubukov should have helped and guided them towards a purposeful discussion.