(i) Which phrase of the extract mean “to supervise’?

Answer: to keep an eye

(ii) For how much time did Mahendra usually stayed at one place?

Answer: For a few months

(iii) Who is author of the lesson from which above extract has been taken?

(iv) From where did Mahendra received orders or his movement?

(iv) Which word in the extract mean ‘factory’ in above extract.

(i) What was the name of the cook whose reference has been made in above extract?

(ii) What phrase in the extract mean ‘close to’?

(iii) What did Mahendra consider his asset?

(iv) How many stories could ‘he’ narrate?

(v) What works did ‘he’ do apart from narrating stories and anecdotes?

(i) Who was Iswaran?

Answer: He was a domestic help of Mahendra.

(ii) When did Iswarn say his prayers?

(iii) What would Mahendra take with him while going to his office?

(iv) What word of the extract is antonym of ‘hurriedly’?

(i) Who is referred as ‘he’ in above extract?

(ii) Which two elements were part of narration by ‘he’?

(iii) The books read by ‘he’ were most likely written in which language?

(iv) Which word in the extract is synonym of ‘to a large extent’?

(i) Who is speaker of the above extract?

(ii) Who is listener of above extract?

(iii) To whom does the word ‘them’ refer to in above extract?

(iv) Which phrase in the extract mean ‘a dense jungle with several trees?

(v) Which word in the extract is mean ‘thick pieces of wood’?

(i) On seeing elephant, where did school boys go?

Answer: They ran to their classes

(ii) How did the elephant enter school compound?

Answer: It broke the boundary wall enter into the school.

(iii) For whom the word ‘beast’ has been used in the extract?

(iv) Which word as used in the extract is antonym of ‘inflating’?

(v) Who is speaker of the above extract?

(i) Who is referred as ‘I’ in above extract?

(ii) Why lot of mud and dust went into air?

Answer: Because the elephant was stamping its feet on the ground.

(iii) Which word in the extract is antonym of ‘pleasantly’?

Answer: To one of the teachers

(v) Which word in the extract mean ‘with full attention’?

(i) Did Mahendra believe every story Iswaran told?

(ii) Which word as used in the extract mean ‘unique’?

(iii) Which phrase as used in the extract mean ‘compensate’?

(iv) At what frequency Iswaran used to narrate a story?

(v) How many TVs Mahendra had in his quarter?

(i) What was special about ‘that night’?

Answer: That night was for feeding spirits of our ancestors

(ii) Which word as used in the extract is synonym of ‘cooking’?

(iii) Which word as used in the extract mean ‘unpleasant’?

(iv) To whom does the word ‘he’ refer to in above extract?

(i) Who is speaker of the above extract?

(ii) Who is listener of the above extrat?

(iii) Name the writer of the text from which above extract has been taken?

(iv) Which phrase in the extract mean ‘periodically’?

Answer: off and on

(v) At what time did the ghost appear?

Answer: Iswaran had narrated the story of a female ghost

(ii) Why did mahendra look outside the window?

Answer: To be sure that there was no movement of dark shapes

(iii) Which word as used in the extract mean ‘nearby’?

(iv) How far was the factory from the quarters?

(i) Who is referred to as ‘he’ in above extract?

(ii) What was the ghastly experience of ‘he’?

Answer: He had seen a dark cloudy form outside his window

(iii) Which word as used in the extract mean ‘reduced’?

(iv) How did domestic help of ‘he’ found out the horror of ‘he’?

Answer: Iswaran had come to the bed room of Mahendra last night.

(i) What was the amazing capacity of Iswaran?

(a) to produce bundle of currency from nowhere

(b) to produce food from nearby town

(ii) With what material residence at new place was made?

(iii) According to extract, which of the following thing Iswaran did not do?

(iv) Which word in the extract is synonym of ‘apparently’? 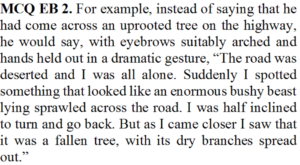 (i) Which word in the extract is synonym of ‘empty’?

(ii) While narrating story, which of the following part of the body was not used by Iswaran?

(iii) While narrating story, which part of the tree has not been mentioned?

(v) Which of the following word is singular

(vi) Which word has been used in the extract as a one word substitute for the phrase ‘spread out’?

(i) What does the word ‘stalls’ refer to in above extract?

(ii) Which word in the extract is antonym of ‘exited’?

(iii) The phrase ‘ran helter-skelter in panic’ has been used in the extract. Which of the following is not the correct use of similar expression.

(a) ran helter-skelter on stairs

(b) ran helter-skelter in the street

(c) ran helter-skelter in the bed

Answer:  Iswaran had an amazing capacity to procure fresh vegetable and cooking ingredients at any location of works. Many times shop did not exist upto a far off distance from their place of residence. Still he could source these materials almost from nowhere.

Answer:  Iswaran tied up the place, he washed cloths and took a leisurely bath. While taking bath he would be muttering his prayers. After having his lunch, he would read a book of a Tamil author. Then he would doze off for some time.

Answer:  Iswarn uncomplainingly followed Mahendra to every posting. Iswaran tidied up the place, washed clothes and cooked food for Mahendra. Every day he told some narrative or anecdote to Mahendra.

Thus Iswaran was an asset to Mahendra.

Answer: The elephant broke the brick boundary wall of the school and entered to playground. Then the elephant grunted and wandered about. It uprooted football goal-posts, tore volleyball net and flattened the drums and uprooted shrubs.

Answer: Mahendra was junior supervisor in a firm that provided supervisors on hire. He was deputed to various sites like construction a factory, bridge and dams. Job of Mahendra was to keep an on activities at the site of works.

Answer:  Iswarn was in a habit of reading books. These books were usually popular Tamil thrillers usually running into hundreds of pages. By reading such books he adopted the style of narrating with suspense, adventure and creativity.

Answer:  Iswaran took a cane from a teacher. He reached directly in front of elephant. The tusker grunted and swung a branch menacingly. It raised its trunk and trumpeted loudly. It was ready to rush towards Iswarsn. At that time Iswaran moved forward and hit the elephant on its third toenail.  The elephant collapsed to the ground.

Answer:  The elephant had escaped from the timber yard. It began to raom in the village. It stamped on buses, and tore away other vegetation. It caused destruction to boundaries of houses and schools. It destroyed various shops. Not even his mahout was able to control it.

Thus we conclude that the elephant had gone wild.

Answer:  As per tradition, that was an auspicious day. Traditionally several special dishes or delicacies were to be prepared to feed spirits of ancestors.

After that night Mahendra had an uneasy sleep. Every night he used to peer out of his window to check if there was any movement of dark shape.  He liked looking at the milky white landscape on a full moon night. But he stopped looking out after hearing the story.

Answer:  mahendra was woken up from his sleep due to a low moan close to his window. The wailing became louder and louder.  Out of his curiosity to know about the sound, he looked outside the window.

He saw a dark cloudy form clutching a bundle.

Answer:  Once Mahendra had seen a dark cloudy form outside his window during night. He got afraid. he convinced himself that it was because of some auto suggestion or some thought of subconscious. By the next morning he had almost forgotten about it. But Iswaran reminded about it. Because of fear he decided to leave the place

Answer: I am of the opinion that the title of the text is justified.

The text revolves around story telling ability of Iswaran. He created an aura of suspense and thrill to a story.

Description of fallen tree as a bushy beast creates a suspense in the mind of listener. The story of elephant starts with simple statement about forest. A climax is built up through narration and it ends with a brave act of Iswaran. The story of a female ghost is started by talking of an auspicious day and ends with Mahendra leaving the place in haste.

Other abilities of Iswaran have been referred to as minor attributes.

Thus the title of the text is justified.

Answer:  Iswaran had a habit of building up a story before commencing the main story.

While narrating the story of a fallen tree he starts with his travelling alone. He also mentions that the road was empty. This creates suspense.

He talks about full moon being an auspicious day. Then he talks about the tradition of feeding spirits of ancestors before saying that he had seen some skulls in the factory. He builds up horror.

Thus we can conclude that Iswaran had the ability to build up a story.

Answer: Mahendra was a simple person and he had kept his needs to minimum. He could easily adapt to varied conditions of work.

He was junior supervisor in a firm that provided supervisors at construction sites.  He did not have any problem in moving from one place to another. He had kept a domestic help to take care of his food and house hold works.

He liked listening to stories narrated by Iswaran. He appeared to have given lot of freedom to Iswaran. So he was a trusting person.

Though he declared himself a non-believer in supernatural but actually had a fear of it.  His hurried departure from work place proves it.

Thus Mahendara was a simple, trusting and gullible person.

Answer: Iswaran started the story by referring to a timber forest and deployment of elephants to carry heavy loads. He says that it is difficult to handle an elephant if it gets mad.

He then talks about an elephant getting mad. The destruction it causes in the forest, at the village and in the school. He describes how people got afraid. Then he talks about the brave action he took to control the elephant. He boasts about his reading habits and his knowledge of some Japanese trick.

He further says that a veterinary doctor could revive the elephant. It was eventually taken back to forest by its mahout.

The story does not appear to be a true story.