Answer: The letter said that Wanda would not come to school anymore. They had shifted to a big city. He hoped that her daughter would not be teased there. Many people in city have funny names.

Answer: Miss Mason is unhappy and upset with the class.

Answer: Maddie felt very sad after listening to the notes. She realised that she was against teasing Wanda but remained silent. She thought her silence was as bad as teasing. She thought she was a coward. She wanted to inform Wanda that she never wanted to hurt her.

Answer: Maddie wants to tell Wanda that she never wanted to hurt her feelings and that Wanda had won the drawing competition. She thought that Wanda was smart and the hundred dresses were beautiful. She wanted to say sorry to Wanda, request her not to move away and assure her that everybody would be nice to her.

Answer: Peggy said that she had never called Wanda a foreigner and made fun of her name. Peggy never thought that Wanda had the wisdom to realise that they were only making fun of her.

Answer: Maddie thought hard about feelings of Wanda. She realised that it was bad on her part to not to have opposed teasing.

Answer: They informed Wanda that she had won the drawing competition and they liked her drawings. They asked if she liked the place where she lived and if she liked her new teacher.

Answer: Wanda replied by writing a letter to Miss Mason.

Maddie was more anxious to get a reply from Wanda.

Peggy had almost forgotten the incident while Maddie was still dreaming about the incident and her behaviour.

Answer: Wanda had gifted a drawing each to Peggy and Maddie. Later they realised faces and heads in the drawings looked like their own.

Therefore they concluded that Wanda liked them.

Answer: Wanda’s family shifted to a different city because she was being teased at her school. Her classmates were making fun of her strange name, about her dress and shoes.

Life at the new place could be different for her. In big city people come from different backgrounds. Everybody is readily accepted there.

Answer: The teasing had a profound impact on Wanda. She was lonely in the school. Eventually Wanda left the town.

If Maddie had spoken up against the teasing, probably Wanda would not have felt lonely but would have had a friend. Maddie thought that she had silently supported a wrong deed.

Thus Maddie was right in realizing that her silence was as bad as Peggy’s teasing.

Answer: Peggy was of the opinion that Wanda should not have lied about her dresses. Also, if Wanda felt so bad about the teasing, she should have spoken up. Hence Peggy thought Wanda was a fool.

After looking at the drawings, Peggy realised that Wanda had talent and could express herself. Thus she changed her opinion about Wanda.

Answer: Maddie decided that if her friends ever teased another girl, she would speak up against teasing and support the girl.

She was herself a poor girl. She had a fear that if she spoke up, she too would be teased. In order to overcome her fears, she thought hard about the incident and decided to speak up against such incidents.

Answer: Wanda was a good natured girl. Wanda gave them drawings to convey that she had forgiven them.

They were surprised because though they had insulted Wanda, she had decided to give them a gift. Peggy and Maddie were more surprised that those drawings were of their own faces.

Answer: Wanda was fully aware that the girls were teasing her. She understood that they were making fun of her strange name and her poverty.

That is why she tried to boast of having hundred dresses with her. But eventually she decided to leave the town.

Please tell the girls they can keep those hundred dresses, because in my new house I have a hundred new ones, all lined up in my closet.

Peggy, who had thought up this game, and Maddie, her inseparable friend, were always the last to leave.

Miss Mason took off her glasses, blew on them and wiped them on her soft white handkerchief.

She had stood by silently, and that was just as bad as what Peggy had done.

Answer: The poet wants to turn away from human beings and he wants to live with animals. These animals are calm, self-satisfied and live in simplicity. Actually he wants to go back to the times when man used to live in jungle with animals.

1. Human beings complaint about their condition of living. Animals do not make any complaints.

2. Human lie awake during night and weep for the wrongs they have done. Animals do not do anything wrong and sleep peacefully.

3. Human beings discuss a lot about God and define their duties towards God. Animals do not pray to any God and live their life without prayers and fasting.

Answer: Yes, humans kneel to their ancestors who had lived thousands of years ago. They have high respect towards their ancestors and organize various rituals in their memory. 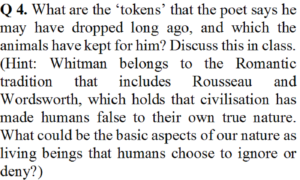 Answer: Poet is referring to the quality of being innocent, friendly and to behave true to their nature. As a living being, we are supposed to have virtues of kindness, unselfishness and empathy. With development of civilization, urbanisation and change in the life style, human beings no longer possess these qualities.

On the contrary, animals behave as their natural self. They do not pretend to be away from their natural habits. Their routine is confined towards their food only. They are loyal to anybody who helps them or shows kindness towards them.