A TRIUMPH OF SURGERY

1. Who is speaker of above line and to whom these lines are spoken to?

Answer: Mrs. Pumphrey is the speaker and Dr. Herriot is the listener.

2. Who is being referred as ‘he’ in above extract?

Answer: The little dog Tricki is being referred as ‘he’.

3. What is the meaning of ‘lumbago’

Answer: It means back pain

1. What trouble is being referred to in this extract?

Answer: Mrs. Pumphrey was overfeeding the little dog. She was also giving him cream cakes and chocolates.

2. Who is the speaker of above lines?

Answer: Dr. Herriot is speaker of these lines.

3. What was the advice given by narrator to the owner of the dog?

Answer: The narrator had advised to reduce feeding sweets to Tricki and to give him enough exercise.

4. What is the profession of the speaker of above line?

Answer: He is a veterinary doctor.

Answer: The dog Tricki is being referred as ‘poor old lad’.

Answer: He is being referred as ‘poor old lad’ because he is sick.

4. What was the cure in the mind of narrator?

Answer: The narrator wanted to reduce diet of Tricki and give him good exercise.

Answer: It means ‘not active’.

6. Which word in the extract is synonym of ‘treatment’?

1. What sweet things are being referred to in the extract?

Answer: Cream cakes and chocolates are being referred as sweet things.

2. Why does the speaker enquire if the sweet things have been cut down?

Answer: He wants to know if Mrs. Pumphery has followed her advice to reduce sweat things to improve health of Tricki.

(iv) Who is speaker of above line?

Answer: Dr. Herriot is speaker of above extract.

1. Who is speaker of above line?

Answer: Mrs. Pumphery is speaker of above extract.

2. What did speaker feel so difficult?

3. Who used to take Tricki for a walk?

Answer: Hodgkin the gardener used to take Tricki for a walk.

4. What did Mr Herriot expect to happen soon?

Answer: Dr. Herriot had expected that Mrs. Pumphrey would soon call him about health of Tricki.

1. Who is speaker of above line?

Answer: Dr Herriot is speaker of above extract.

3. What was temptation to keep Tricki as a permanent guest?

Answer: Eggs, wine and brandy being sent by Mrs. Pumphery were the temptation to keep Tricki as permanent guest.

4. In which colour car Mrs. Pumphery came to collect Tricki?

Answer: She came in a black colour car.

1. Why did Mrs Pumphery lean out of window?

2. Why Mrs. Pumphery had tears in her eyes?

Answer: She had become emotional seeing that her dog was fully cured.

3. Where did the incidence of the extract had occurred?

Answer: The incident had occurred at the surgery of Dr Herriot.

2. Why was narrator worried?

Answer: Narrator was worried about health of Tricki.

3. To whom was the suggestion made?

Answer: The suggestion was made to Mrs. Pumphery.

4. What was the first reaction of Mrs. Pumphery after listening to the suggestion?

Answer: She almost fainted. She thought that Tricki would pine and die if he did not see her every day. 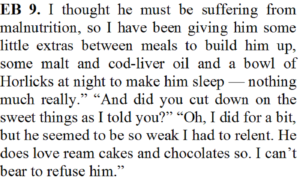 (i) Who thought that he was suffering from malnutrition?

(iii) Which type of dish doctor had advised to reduce?

(iv) Which expression in the extract mean ‘for some time’?

(a) some little extra

(b) nothing much really

(vi) Answer of which of the following question cannot be ‘nothing much’? 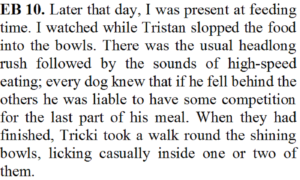 (i) Who is being referred to as ‘I’ in above extract?

(ii) Who is Tristan?

(a) a person working at surgery

(b) a person working at the house of Mrs. Pumphery

(iii) Why the bowls were shining?

(a) there was enough light

(b) these had been polished

(c) dogs had licked all the food from these

(v) The expression ‘headlong rush’ has been used in the extract. Which of the following expression in incorrect in respect of word ‘headlong’

Answer: Mrs. Pumphrey was not following advice of Dr Herriot about Tricki. So Herriot was sure that health of Tricki would deteriorate. Therefore Mrs Pumphrey would call to take treatment for her dog.

She thought that her dog was inactive because it was suffering from malnutrition.

Thus we conclude that it was hard for Mrs. Pumphery to part with her dog.

Answer: He was given only water for two days. Next day onward he was given normal diet and made to struggle for his food. He was prompted to play and run around with other dogs.

Thus without any medicine, Tricki became active and recovered his health.

Answer: Mrs. Pumphery used to send eggs, wine and brandy to the hospital for Tricki. Dr. Herriot and his staff used to enjoy eggs at breakfast, wine during lunch and brandy in the night.

Answer: Tricki had become inactive. She thought it was because of malnutrition so she increased his diet. This worsened health of Tricki. He refused to eat his favorite food. He was lying in his rug and panting. He even vomited.

Answer: Dr Herriot had advised to reduce feeding sweets to Tricki. He had also advised to give plenty of exercise to Tricki. He advised Mrs. Pumphery to harden her heart and keep Tricki on a very strict diet.

Answer: Other dog observed Tricki. They found that Tricki was a fat and lazy dog. They thought Tricki would not be able to play with them.

Answer: Tricki had become fat and lazy. Mrs. Pumphery could not implement advice given to her earlier. Instead she had added more food in his diet. To implement strict diet plan and to give good exercise to Tricki, Dr. Herriot asked Mrs. Pumphery to admit him to surgery.

Answer: Mrs. Pumphrey was a rich woman who loved her dog very much. She had lot of clothes according to every season for her dog.

She overfed Tricki. Whenever he was inactive, she increased his diet. She added cod-liver oil, malt and Horlicks in his diet. She could never understand that overfeeding was the cause of Tricki’s poor health.

She did not follow the advice of Dr Herriot to reduce diet and to give adequate exercise to dog. While Tricki was in hospital she continued to send eggs, wine and brandy for him.

When Dr Herriot put the dog on normal diet and made him to play and run around, he recovered without any medicine.

It was her excessive affection towards her dog that he fell sick. Hence we must be careful to avoid doing anything in excess. It would surly cause damage to self, friends and society.

Answer: Dr. Herriot was a capable veterinary doctor. He quickly understood the cause of poor health of Tricki. He had advised Mrs. Pumphery to reduce diet for the dog and give him good exercise.

He had a good understanding. He realized that Mrs. Pumphery would not be able to control diet of Tricki. So he convinced her to admit the dog in his hospital for some time.

He was practical. Having understood the cause of poor health of the dog, he did not give any medicine to Tricki. He cured Tricki by controlling his diet. He prompted Tricki to play and run around with other dogs.

He was polite. He avoided answering questions of Mrs. Pumphery about diet and clothing of Tricki. He requested Mrs Pumphery to remain seated in the car and himself brought Tricki to her.

Thus Dr Herriot was a practical and good natured person.

Answer: Tricki was overfed at his house. He had the luxury of consuming sweets, cod-liver oil, malt, Horlicks, eggs, wine and brandy. He had different clothes for different season and days. He had little exercise at this house.

At the surgery he was given only water for first two days. Third day he could not eat anything because his responses were slow. Next day onward he started actively to consume food for himself. There was no pampering.

He was prompted to play and run around with other dogs of surgery. Soon he started enjoying friendly scrimmages, being bowled over, tramped and squashed every few minutes. He became a member of the crew. He fought like a tiger for his share during mealtimes and hunted rats at night.

He never had such a life at his house.

Answer: Dr Herriot was certainly a good doctor. During his initial visits itself he understood the reason of Tricki’s sickness. Mrs. Pumphery was overfeeding her dog. The dog was not getting adequate exercises.

Dr. Herriot realized that Mrs. Pumphery cannot control diet of Tricki. So he convinced her to admit the dog in his hospital for some time.

Dr Herriot did not give any medicine to Tricki. The dog was given only water for first two days. Third day he could not eat anything because his responses were slow. Next day day onward he started actively to consume food for himself.

Tricki was prompted to play and run around with other dogs. He started enjoying friendly scrimmages, tramped and squashed every few minutes. He fought for his share during mealtimes and hunted rats at night. Soon recovered fully.

Answer: The tile ‘A Triumph of Surgery’ is very much suitable to the text.

Mrs. Pumphrey had a pet dog Tricki. It was not keeping good health. Mrs. Pumphery had consulted a veterinary doctor Herriot. The doctor had advised to reduce diet of Tricki and to give it lot of exercise.

But owing to undue affection she did not control diet of Tricki. It was not given enough exercises. So its condition further deteriorated.

Dr Herriot took the dog to his surgery – the veterinary hospital. Now Mrs. Pumphrey was a worried person. At the surgery Dr. Harriot altered its diet. He created conditions so that dog could have lot of exercise.

Gradually Tricki started running around and became an accepted member of pack of dogs. It ran around, played and even hunted rats.

In about two weeks’ time Tricki had regained his health. It was a big surprise and relief to Mrs. Pumphrey. She was happy that Dr. Herriot had cured Tricki at the surgery.

Thus it was regarded as ‘The Triumph of Surgery’.