Thinking about the Play

Answer: Initially Chubukov suspects that Lomov had come to borrow some money.

Chubukov is not sincere in telling Lomov that he had always loved Lomov. Because he had initially suspected Lomov and had decided not to give any money.

Answer: When Chubukov understood that Lomov had come with a marriage proposal for Natalya, he immediately agreed. He even said that Natalya was in love with Lomov.

But I think that was not the truth. Lomov and Natalya fought with each other about ownership of Oxen Meadows and superiority of their dogs. They insulted each other’s forefathers. Natalya teased Lomov. It is clear from the text that they did not have faith on each other. 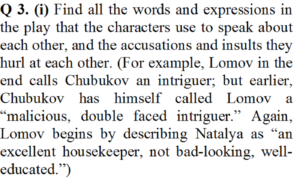 You may consider that or you may understand

You may take it that I am a good singer but actually I am merely a beginner.

You may take my thoughts as against you but these are words of wisdom.

He is not telling directly

He spoke about weather before he asked for help. He seemed to be coming around

My foot has become numb

I have been sitting on chair for a long period. My foot has gone to sleep.