THE GHAT OF THE ONLY WORLD – Extra Questions 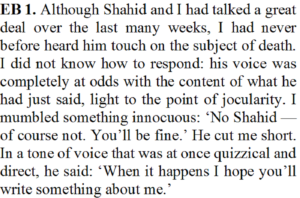 (i) Since how much time author has been in conversation with Shahid?

(a) last many moths

(b) last many weeks

(ii) How many times Shahid had talked about his death before?

(a) couple of times

(iii) What is not true about what Shahid had talked on that day?

(a) It was the time he had talked about his death

(c) His voice was almost jockular

(iv)In reference to Shahid which of the following are true

(a) the two warring groups are completely at odds

(b) this statement is completely at odds to the earlier one

(c) these identical colours are at odds to each other

(d) two brothers are completely at odds to each other. 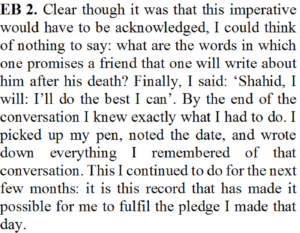 (i) What ‘imperative’ author is referring to?

(a) request by Shahid to write about him

(b) order by Shahid to bring a cake

(d) request by Shahid to always remember him

(ii) Which of the following was done by author to fufill his pledge?

(a) note down conversation of that day

(b) make audio recording of whatever Shahid spoke

(c) record further conversation he had with Shahid

(iii) What did the author promise to Shahid?

(a) I will write about you

(c) I will not write for you

(d) I may not be able to write for you 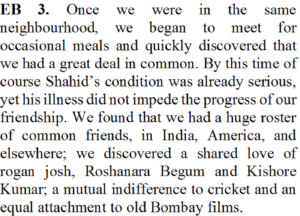 (i) Author used to occasionally meet Shahid for

(iii) Based on the extract, please classify following as facts and opinions

(iv) Which is of the following word used in the extract is synonym of ‘discovered”? 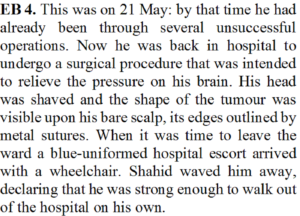 (i) By what date Shahid had undergone many operations?

(ii) What was the objective of presently proposed procedure?

(a) to remove tumour

(b) to reduce pressure on his tumour

(c) to reduce pressure on his brain

(d) to reduce size of the tumour

(iii) With respect to above extract, which of the following is not a correct statement ?

(a) head of Shahid was shaved

(b) shape of tumour was visible

(c) size of the tumour was quite small

(d) the sutures were of metal

(a) he was wearing blue uniform

(b) he came with a stretcher

(c) Shahid sent him away

(d) Shahid wanted to walk on his own

(v) An expression ‘when it was time to leave’ has been used in the extract. Which of the following is not the correct use of above phrase?

(i) when it was time to arrive

(ii) when it was time to depart

(iii) when it was time to dance

(iv) when it was time to coming 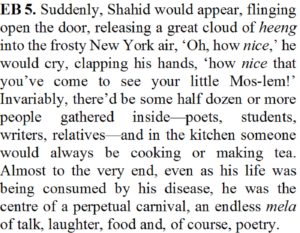 (i) An expression ‘releasing a great cloud of heeng’ has been used in the extract. What does the word ‘cloud’ mean in this phrase?

(ii) How many people used to be gathered in the house of Shahid?

(iii) The gathering at the house of Shahid comprised of

(iv) Upto the end, life of Shahid was full of

(a) cooking and making tea

(b) baking and cooking 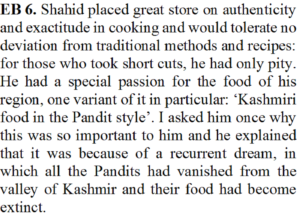 (i) ‘Shahid placed great store on authenticity’. What does the word ‘store’ in this line?

(ii) The expression ‘for those who took short cuts, he had only pity.’ has been used in the extract. Which of the following is an incorrect use of ‘took short cuts’?

(a) for those who relied on short cuts

(b) for those who believed in short cuts

(c) for those who made short cuts

(d) for those who ate short cuts

(iii) It can be inferred that his region was

(iv) What did Shahid see in his recurrent dreams

(a) all Pandits had vanished from Kashmir

(b) food of Pandits had become extinct 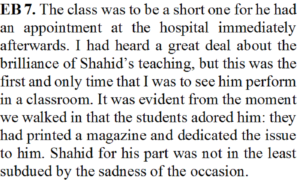 (i) Where did Shahid has to go immediately after the class

(b) to another class

(ii) How many times before this had author witnessed Shahid teaching in a class?

(iii) What had students done to express that they liked Shahid?

(a) printed a magazine

(b) dedicated that issue of magazine to Sahaid

(iv) The duration of the class under reference was

(a) longer than usual

(a) not in the least elated by the happiness of occasion

(b) not in the least affected by the seriousness of occasion

(d) not in the least hungry by the excitement of victory 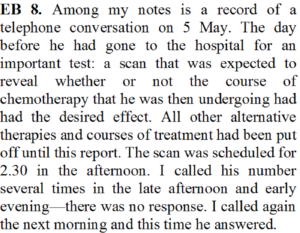 (i) When was the scan scheduled to be conducted?

(ii) Why was scan to be carried out?

(a) to know the effect of chemotherapy

(b) to know the importance of chemotherapy

(c) to assess the extent of damage

(iii) What was the scheduled time of the scan?

(iv) Based on above extract, please classify following as facts and opinion. 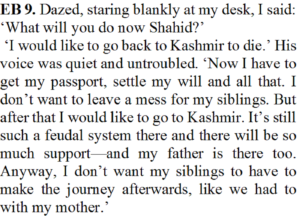 (i) Where did Shahid want to shift to before his death?

(ii) What works Shahid wanted to complete before shifting to Kashmir?

(a) complete his will

(b) get his passport

(c) some other works

(iii) Why would, according to Shahid, good support be available in Kashmir?

(a) systems at Kasmir are still feudal

(b) his father also stayed in Kashmir

(c) his siblings lived in Kasmir.

(iv) An expression ‘there will be so much support’ has been used in the extract. Which of the following is not the correct use of ‘so much’

(i) there will be so much happiness

(ii) there will be so much crowd

(iii) there will be so much rains

(iv) there will be so much apples 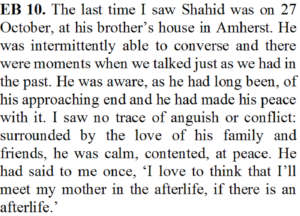 (i) Where did the author last see Shahid?

(b) at his brother’s house

(ii) What did author observe about the way Shahid talked?

(a) he talked intermittently

(b) occasionally he talked as earlier

(iii) Which of the emotions author did not find in Shahid?

(iv) Based on above extract please classify following as facts and opinion.

Answer: On 25th April 2001, writer had telephoned Shahid. While going through his engagement book, Shahid suddenly said that he could not see anything. He asked author if this meant he was dying. This was the first occasion Shahid had talked about his death.

Answer: Shahid had requested author to write about him after his death. Shahid wanted author to remember him through written words and not through spoken recitatives of spoken words and memories.

Answer:The author had promised to write about Shahid after his death. The writer noted down the date and their first conversation about Shahid’s death. Author went on recording their discussions. He would refer these while writing about Shahid.

Answer: Shahid was a poet. He wrote several collections of poems.

Answer: Almost every evening there used to be gathering of poets in his house to talk about poetry. He ensured to serve them with good food.

Thus we can say that he was a gregarious person.

Answer: Shahid wanted to breathe his last in his homeland of Kashmir.

However owing to logistical and some other reason he could not travel to Kashmir during his last days.

He was laid to rest in Northampton.

Answer: Shahid assigned great importance to traditional food and its right method of cooking. He had a special passion for food of his region – ‘Kashmiri food in the Pandit Style’. Rogan josh was his favourite dish. He also loved Bengali food.

Answer: James Merril had the greatest influence on the poetry of Shahid. After their meeting Shahid had started experimenting with strict, metrical patterns and verse forms. Shahid had awarded the status of envoy to Merrill in a poem in which he prefigured his own death.

Answer: While teaching at Baruch College, an Indian student arrived late. He said – ‘Ah, my little subcontinent has arrived’. He clasped his hands, feigned a swoon and said ‘It stirs such a tide of patriotism in me to behold another South Asian.’

The whole class burst into laughter

Answer: Shahid conducted himself with aplomb and dignity. He continued to host fellow poets at his house. He continued to teach in the university. He did not allow even a trace of sadness to overpower him.

His greatest consolation was that he would meet his mother in afterlife.

Answer: Every evening there used to be a gathering at his house. Poets, writers, relatives, friends and students used to participate. There would be discussion and laughter. He would also serve them food. He regularly took his classes.

Till his end, he continued these activities of being among people.

Answer: Shahid was a patriotic person. He loved Kashmir. He used to often go there. He had a desire to die there.

Shahid was a gregarious person. He liked to be among his family, relatives, friends, poets and students. Every evening there used to be a gathering of people at his house. He would serve good food to his guests.

He was liked by all. His students too adored him. His relatives and friends had an affectionate bonding with him. The author agreed to write about him is an evidence.

He was a witty person. Incidents at Barcelona airport and those in his class are ample evidence to prove this quality.

He was a person of strong determination. He did not pity himself after becoming aware about malignant brain tumour. He carried himself through with self respect.

Thus Shahid was a patriotic, gregarious, witty and amiable person.