(i) Please write name of the spouse of Jainulabdeen?

(iii) Which word in the extract is synonym of ‘in spite of ’?

(iv) Who is referred as ‘I’ in this extract?

(ii) What was ‘I’ not able to understand?

(iii) Where was the provision shop situated?

Answer: On the Mosque Street

(iv) Which word as used in the extract represents part of a rupee?

(v) Which phrase as used in the extract mean ‘large amount of money’?

(i) Why newspapers had to be thrown from moving train?

Answer: the train did not stop at Rameswaram

(ii) On which station the newspapers used to be thrown?

(iv) Who gave the first salary to the narrator?

(v) Which word in the extract mean ‘vacancy’? 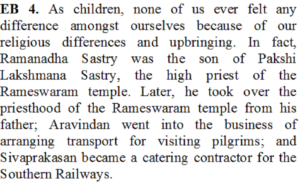 (i) Who was the high priest?

(iii) Who felt the difference amongst themselves during childhood?

(iv) Who became the catering contractor?

(v) Who started a transport business?

(vi) Which word in the extract pertains to ‘supply of food’?

(ii) In which class was ‘I’ studying then?

(iii) What identified the narrator as a Muslim?

(iv) Who used to sit next to the author?

(v) In which row narrator used to sit?

(i) What was the attitude of the society about segregation of different groups?

(iii) To whom does the word ‘he’ refer to in above extract?

(iv) Which word in the extract is synonymous of ‘revolutionary’?

(vi) Which word as used in the extract is synonymous of ‘mix’?

(i) Who according to Gandhiji should build their own India?

(ii) Did India get freedom before end of Second World War?

(iii) Which word in the extract mean ‘hopefulness’.

(iv) Why did I want to leave Rameswaram?

(vi) Whose permission did ‘I’ seek?

(i) Who observed whose hesitation?

(ii) When was ‘I’ invited again for dinner?

(iii) Which word in the extract is synonymous to ‘faced’?

(iv) Where was ‘I’ served food on the next occasion?

(a) outside the kitchen

(b) away from kitchen

(c) in the kitchen

(d) in the veranda

1. ‘I’ hesitated to accept the invitation

2. Iyer should have informed his wife about visit of ‘I’

3. The lady of the house served food with her own hands

4. Since his childhood Mr. Iyer was a courageous person

(vi) Which of the following task Mr. Iyer did not perform?

(a) he invited the narrator

(b) he explained his determination

(c) he got angry at his wife

(d) he was quick to observe narrator’s hesitation

(i) How many siblings the narrator had?

(ii) The narrator has claimed that

(a) his friends differentiated on the basis of upbringing

(b) his friends differentiated on the basis of religion

(c) his friends were from orthodox families

(d) his friends were four in number

(iii) An expression ‘so did’ has been used in the extract. Which of the following is not the correct use of similar expression?

(a) My father played football, so did I

(b) My mother cooked nice food, so did my sister

(c) My neighbour was an able person, so did his son

(d) My brother wrote good poetry, so did my nephew.

1. I inherited honesty from my father.

2. Father must have been a brave person.

3. I inherited deep kindness from my mother

(v) Which word as used in the extract is synonym of ‘traditional’?

(i) What is the name of newspaper mentioned in the extract?

(iii) What was the first important impact at Rameswaram of India joining the Second World War.

(b) Train halt was suspended

(iv) Why was ‘our area’ unaffected by the war?

(c) It was an isolated area

(d) It was a coastal area

Answer:  His father avoided all unnecessary comfort and luxuries. But all requirements of food, cloth and medicine were provided.

Thus Kalam says that his childhood was secure materially and emotionally.

Answer:  Kalam describes his father as a person of great innate wisdom and a truly generous person. He did not buy luxuries but ensured that requirements of food, cloth and medicine were provided. Kalam inherited honesty and self-discipline from his father.

Answer: During Second World War demand of tamarind seeds suddenly increased in his village. Kalam used to collect tamarind seeds during day time. He used to sell the collection of a day to a provision shop. It fetched him an anna.  That was his first income.

Answer:  The family of Kalam used to arrange boats with special platforms to carry idols of Rama to the marriage site. The marriage site was in the middle of a pond Rama Tirtha. This place was very close to the house of Kalam.

Answer:  Kalam and Ramanadha Sasty used to sit next to each other in the front row. When Kalam was in fifth standard a new teacher came to the class. He asked Kalam to sit in the back row.

Owing to this reason both Kalam and his friend became sad.

Answer:  The science teacher did not believe in the social barricades. He used to do his best to break the barriers of social difference. He had invited Kalam to his house for meals.

The wife of teacher had orthodox thoughts. She did not serve food to him in her kitchen. However on second occasion she herself served him food in the kitchen.

Therefore Kalam says that he was something of a rebel.

Answer: All the kids studied in the same school without any discrimination. Kids of different groups were friends of each other and cared for each other. When Kalam was asked to sit in the back row his friend cried a lot.

During celebration of  Shri Sita Rama Kalyanam ceremony family of Kalam used to arrange boats that had special platforms. These boats were used to carry idols of Rama to the site of marriage.

Mother and grandmother of Kalam used to narrate bedtime stories about Ramayana and life of Prophet.

The science teacher guided Kalam to the best of his ability. He had invited Kalam to dine at his house.

Above incidents prove that both groups lived in harmony.

Answer: During Second World War, India was forced to join Allied Forces. Thus India was also included in the war. A sort of emergency was declared around the native town of Kalam.  The first victim of this was suspension of train’s halt at Rameswaram.

Now the newspapers from the train had to be bundled and thrown from the moving train at Rameswaram Road station.  Samsuddin, cousin of Kalam, was in the business of distributing newspaper. Now he required help to collect bundles of newspapers.

Samsuddin hired Kalam for this work. This is how Kalam earned his first wages. Kalam felt very happy and proud to earn money on his own.

NO MEN ARE FOREIGN

(i) Which poetic device has been used in the third line of the extract?

(ii) Whose uniform is being referred to in second line of the extract?

(iii) According to extract, is the earth regarded differently by people?

Answer: No, it is similar

(iv) What does poet say about breathing?

Answer: Poets says that the act of breathing is similar for all.

(i) Please name any three things poet says are similar for all?

(ii) Which word in the extract is antonym of ‘ignorant’

(iii) Which poetic device has been used in the third line of the extract?

Answer: repetition, the word ‘their’ has been repeated.

(iv) What is the meaning of last line of the extract?

Answer: All people need to do hard work.

(i) What does the word ‘they’ mean in this extract?

Answer: the people of foreign countries

(ii) Which poetic device is used in the first line of the extract?

(iii) In reference to third line of extract what is common in every part of earth?

(iv) Which word in the extract is synonym of ‘comprehend?

(v) According to extract how people can be won ?

(i) What does the word ‘betray’ mean in this extract?

(ii) According to extract when do we condemn ourselves?

Answer: when we hate others

(iii) What does the phrase ‘take arms against each other’ mean?

Answer: to fight with each other

(iv) Which poetic device has been used in first line of the extract?

Answer: Alliteration, the word ‘w’ has been repeated

(i) According to extract which word is synonymous to ‘anger’?

(ii) According to extract what is common to all people?

(iii) According to extract what do we pollute?

Answer:  All people are made of bones, flesh and blood that are similar. They walk, sleep and breathe in same way. They have similar emotions of affections and togetherness.

Answer:  Harvest means crop that we grow through farming to fill our bellies. During peace time harvest can be grown. During war harvest is destroyed. Thus harvest represents peace.

Answer:  All people do some work to earn their livelihood. All have similar nature of work throughout the world. Thus hard work of all people is similar.

Answer: Every war causes destruction of life, flora and fauna. It pollutes the environment. Huge misery is caused to every faction that engages in war.

So war causes damage to whole human kind and the Mother Nature. So we should never engage in wars.

Answer: Poet wants to say that eyes of all people serve the same function of seeing. Our eyes close when we sleep and open when we wake up. We all want to see the beauty of nature through our eyes.

So eyes of all people do the same function.

Answer: Poet wants to convey that all people living on this earth are similar. They have the same emotions. They behave in similar way. Their needs are similar. Therefore we all should live with affection towards each other. We should never look down upon others.  We should respect each other.

Answer: Since the beginning of human civilization man has been engaging in wars. Every war has caused lot of destruction in the world. Many ancient civilisations and cultures have become extinct.

Who can ever forget the extent of damage caused due to the two World Wars we have fought. The whole economy of the world had suffered. So many people had lost lives and livelihood. The devastation caused by dropping of nuclear bombs is beyond imagination.

On the lesser front, wars within smaller society has also left permanent scars. The policy of apartheid has left a sore taste to all. Ethnic violence that erupts here and there too causes severe damage to society.