(i) Where is the narrator?

(ii) For whom the way was made by the crowd?

(iii) Name the colour of dress worn by Westerners?

(iv) Which word as used in the extract is synonym of ‘comes’?

(v) Which word in the extract is antonym of ‘exit’?

(vi) Name the author of above extract?

(i) ‘A corpse is being cremated on its bank’. Name the river to which the word ‘its’ refer to?

(ii) Who are taking bath at the bank of the river?

(iii) What is thrown into the river?

Answer: A basket of flowers and leaves

(iv) What extends from the stone platform?

(v) Which word as used in the extract is antonym of ‘fresh’?

(ii) Who owns most of the shops?

(iii) What prevails in the busy streets?

(iv) Write name of the lesson from which the above extract is taken?

(v) Please write the one word used in the extract for ‘surrounded’?

(i) How many cities have been named in above extract?

(ii) How many rivers have been named in above extract?

(iii) From above narration, which city is likely to be hometown of narrator?

(iv) Please write the date (without year) on which above narration is written?

(v) Which word in the extract mean ‘tired’?

(vi) Which phrase in the extract mean ‘by itself’?

(iii) Which phrase in the extract mean ‘stops’?

(v) Which word in the extract is synonym of ‘business’?

(vi) Which word in the extract is synonym of ‘think’?

(i) What two things weave its own association?

(ii) How can one be drawn into the commonalities of mankind?

(iii) What does the author mean by ‘living breath’?

(iv) What does a flute player need to do before going on to play flute?

(v) Which word in the extract mean ‘stop’? 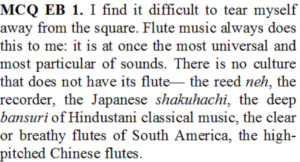 (i) Where is the narrator standing?

(a) at the lobby of his hotel

(b) at the square of the town

(c) at the courtyard of his house

(ii) Which flute has a high-pitched sound?

(iii) Which culture does not have its flute?

(d) All cultures have their flute

1. Narrator finds it difficult to move away from square

2. Narrator thinks all cultures have their flute

3. China should invent a new flute

(v) Which of the following word has not been used as a verb in above extract?

(i) The deities are decorated with

(ii) The streets of Kathmandu are-

(iii) Antiques being sold belong to which country?

(iv) Who is selling postcards?

(v) Which of the following is related to ‘make up’?

Answer: On a signboard outside the temple it is written ‘entrance for Hindus only’. Owing to this proclamation, people of other religion are not permitted to enter the temple.

Answer:  In the temple there are large number of devotees. Each of them wish to draw the attention of main priest to perform their prayers. They elbow each other to get ahead of the other.

Answer:  Only Hindus are permitted to enter the Pashupatinath temple. All the Westerners were wearing saffron coloured cloths. Such cloths are usually worn by Hindus. But the policeman was not convinced that they were Hindus.

Hence he did not allow Westerners to enter the temple.

Answer: Two monkeys started quarrelling in the temple. They chased each other. One of the monkeys climbed on the shivlinga.  They ran around the temple screaming at each other. Finally they ran towards the holy Bagmati river that flows down the temple.

Answer: A corpse was being cremated. Washerwomen were washing clothes. Children were taking bath. Somebody had thrown a basket full of wilted flowers and leaves into the river.

Answer: An old shrine half protrudes into the Bagmati river. People believe that when this shrine fully emerges, the goddess inside the shrine would escape. Then the klaiyuga will end on the earth.

Answer: Baudhnath stupa is a huge dome of white colour. A road runs all-round it. There are many shops at the outer edge of the stupa. Many of the shops are owned by Tibetans. There is no crowds on the roads around it. Over-all, the atmosphere is of heavenly stillness and quietness.

Answer:  Kathmandu is a brilliant and colourful town. The streets are busy and narrow. Hawkers sell fruits, flutes and postcards. Some shops sell cosmetics made in western countries. Film rolls, chocolate, utensils made in copper and things made in old Nepalese style are also sold in these streets.

Answer: Initially the author thought of taking a bus or train to Patna. From there he thought of sailing in Ganges and Yamuna rivers via various town to Delhi.

But he was very tired and feeling homesick. So he bought an air ticket to travel by air.

Answer: The flute seller has made an attachment at the top of the pole. All the flutes are hung to it. He takes out a flute and plays it. The sound is heard above all the noise of the street. People get attracted and he occasionally makes a sale. Thus he is calm and meditative.

The other hawker shout a lot about their ware to make a sale.

Answer: The flute seller was standing at a square near the hotel where author was staying.

In one of his hands he is holding a big pole with an attachment at the top. About 50 or 60 flutes are tied to that attachment. These looks likes quills of a porcupine.

He plays a flute for some minutes. The sound of the flute rises above the noise of traffic and the shouts of hawkers.

He plays flute slowly as if he is meditating or praying. He does not shout about what he intends to sell. But strangely he is very cool. Sometimes he stops playing the flute. He talks to fruit seller. Author thinks that since years this is how he has been doing his business.

A Slumber Did My Spirit Seal

Answer: to the lover of the poet

(ii) What sealed the spirit of the poet?

(iii) What does ‘earthly years’ signify?

Answer: The realities of time

Answer: she could not feel realities of time

(i) What two things ‘she’ cannot do now?

Answer: she can neither hear nor see

(ii) What two things ‘she’ does not have now?

(iii) What is meant by ‘diurnal course’?

(iv) What is the poetic device in third line of the extract?

Answer: alliteration. The letter ‘r’ has been repeated.

(v) What is the poetic device in fourth line of the extract?

Answer: Repetition. The word ‘and’ has been repeated.

Answer: The poet was deeply in love with his lover. He thought that the situation would always be good. These will not altered with passage of time.

Such thoughts caused a deep slumber and poet could not understand that time change everything.

Answer:  The lover of the poet had died. Therefore she colud feel anything now.

Answer: The Earth revolves around its axis and rotates around the Sun.  Owing to these movements changes on the earth are caused. Such changes in daily routine in environment and life of a person is referred to as ‘diurnal course’.

Answer: The poet had thought that situation in life would not change. He had taken life for granted. But the death of his lover made him realise harsh realities of time and life.