I am not good at many things. Among those, living in the reality is probably the most prominent. Author wants to say that many times he would imagine that certain things did not exist or happen for him.

I am regularly surprised by the things many people do. They are able to do these things without any difficulty. Doing such things is certainly not within my ability.

Many times in cinema hall I have tried to search a washroom. Instead of reaching washroom, I would reach at the end of a corridor or a passage. This passage would have a self-locking door. So I would get locked there.

Nowadays my special behaviour is to go the hotel desk two or three times a day.  I would ask my room number there. I easily get confused.

Our group had reached Logan Airport of Boston. It is a town in USA. Suddenly I recalled that I had joined the Frequent Flyer Programme of British Airways. I had joined it recently.

I was carrying a carry-on bag with me. I had put it around my neck. I recalled that I had the card of Frequent Flyer Programme in that bag. Immediately after that all the problems started.

The zip of the bag had jammed.  So I pulled the zip and gave it many jerks. While doing so I was making some strange sounds. My facial expressions had changed. My anger was increasing. I continued to try but the zip of the bag did not move. So I started applying more force to pull it. Louder sounds were emerging from my throat.

Then suddenly the zip opened. The side of the bag opened with a jerk. Everything that was within  the bag jumped out. These were thrown out of the bag without any control. These were spread in a large area. Author has equated it to area of a tennis court to imply that it was really a large area.

I was so shocked that I could not speak anything. The carefully arranged documents flew away one after the other. They were making fluttering sound while flying away from the bag. The coins while rolling down and bouncing were making sounds that I had never heard. The lid of my tobacco tin came out. The tin started rolling away without any control. The tobacco poured out of the tin and spread in the hall.

In general, I felt very bad whenever I saw blood. But that was never my own blood. This time it was my own blood. My shouting was therefore justified. This time I was shouting loudly like a mad person. I was confused.  I was not able to help myself. I did not know what to do.

Now my wife looked at me. She was surprised. She was irritated or annoyed. She told that she was not aware that I did such acts for making a living. She thought I used to play such games to earn money for our house hold expenses.

I am sorry to say that it was true – I always got into trouble during travel. Once I was travelling in an aeroplane. While sitting in my seat I bent to tie my shoelace. The person sitting in the seat ahead of me bent his seat backwards. Both activities happened at the same time. So I was stuck between my seat and the seat ahead of me. I was about to fall down.

I gripped the leg of the person sitting next to me. That was the only method available to me to free myself from that situation.

Author narrates one more incident. That time he spilled his cold drink into the lap of a lady. That lady was sitting in the seat near to him. The flight attendant came. She cleaned clothes of the lady. She gave me another cold drink. I spilled the second drink also on the lady sitting next to me.

Till today I am not able to understand how it had happened. I remember that I had extended my hand to take the cold drink from the flight attended. My hand looked like a poor support for the cold drink. It was similar to the supports used in the horror film The Undead Limb. Suddenly the drink came out from top of the container with full force. All of it fell into the lap of the lady sitting next to me.

The lady looked at me. Her expressions were as if she was shocked. She was certainly shocked to repeatedly get wet by the cold drinking spilling on her. She expressed her shock by a sentence. The sentence started with ‘Oh’ and ended with ‘sake’. I cannot repeat the words spoken between these two words. I had never heard those words. A nun would never speak such words. Author wants to say that such words are not spoken by priests. Probably these were not decent words.

This was not my worst experience in a plane. The worst experience had occurred in another flight. In that flight I was writing some important thoughts in a note book. This is a satire because actually author was writing about some minor things. He had put end of the pen in his mouth. Somehow a conversation started between the author and the beautiful young lady sitting next to him.

I talked to her with for about 20 minutes. During this period I entertained her by my courteous and humorous talks. Then I went to washroom. In the mirror I saw that ink from pen had leaked. My chin, tongue, teeth and gums were shining because of navy blue ink. It was not possible to completely remove those marks by rubbing. Those parts remained blue for many days. 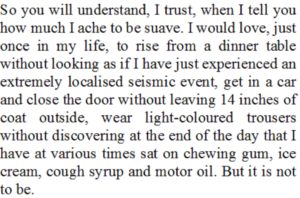 I am sure by now you must have understood that I make lot of efforts to look charming. Many times I would suddenly get up from my dining table. This action would be so quick as if there were an earthquake. I will run towards my car and get into it. In the hurry a good part of my coat will get caught in the door of the car. It would be hanging out side.  Many times I would wear a pants of light colour. I would not pay any attention while sitting at many places during the day. At the end of the day many chewing gums would be stuck on my pants. It will also have many marks of ice cream, cough syrup etc. I know you will not believe it. Author wants to say that he is a careless person.

While travelling in plane when food is served, my wife gives several advice to kids. She would request kids to remove the lid of food packets for me. When I am trying to cut meat in small pieces, she advises kids to put their hood on head. But I hear such words only when I am travelling with family.

But when I travel alone, I do not drink, eat or bend to tie shoelaces. I never put a pen in my mouth.

I could not accumulate my frequent flyer miles. I could never find my frequent flyer card when it is required. I am certainly disappointed because of it. I am aware that everyone is travelling to Bali in first class. They use their air miles.

I could not collect enough air miles. I am flying at least 100,000 miles in one year. Still I have accumulated only 212 miles. This is after travelling in 23 air-lines.

In January I was travelling to Australia. I could have got a large number of air-miles for this flight. When I gave her my card, she shook her head. She told me that I was not eligible for air-miles. I asked her the reason.

The check-in clerk informed that the ticket was for B. Bryson. And the name in the card is W. Bryson. So the air-miles cannot be allowed. I tried to explain to her the close and acceptable relationship between Bill and William. Author wanted to say that both are same persons. By mistake, the name was written incorrectly in the card.  But she did not accept it.

So I did not get any air-miles for the trip to Australia. Therefore I will not be flying to Bali in first class for some more time. Perhaps I should never go there. Because I will not be able to remain hungry during such a long flight.