A HOUSE IS NOT A HOME

(i) Which school was bigger the old school or the new school?

(ii) What made matter worse for the narrator?

Answer: her friends had gone to another school

(iii) Why did author kept going to her old teachers?

Answer: she missed them

(iv) What did old teacher advise the narrator?

Answer: to get involved in school activities

(v) What would participation in activities result into?

(vi) Which word as used in the extract in synonymous to ‘lonely’?

Answer: In a new school

(iii) Which phrase in the extract is synonym of ‘sometimes’?

Answer: from time to time

(iv) Which word in the extract mean ‘relief?

(v) What did ‘they’ imply by the phrase ‘that happened’ indicate?

Answer: When ‘I’ would adjust in the new school and would have new friends.

(i) What was the strange smell?

Answer: It was smell of smoke and something burning

(ii) From where was the smoke entering the house?

Answer: from seams of the ceiling

Answer: because the smoke had filled the room

(iv) Why was mother stoking the fire?

Answer: to keep the house nice and warm

(v) Which word as used in extract mean ‘searching with closed eyes and feeling with hand’?

(i) How many times ‘mother’ ran into the burning house?

(ii) Why did ‘I’ want to call fire department?

Answer: Because her house was burning. She needed help.

(iii) What did mother bring from the house first time?

(iv) Where did ‘mother’ throw the box?

Answer: on the lawn

(v) What did ‘mother’ want to bring during second time?

Answer: photos and letters of ‘father’

(vi) Which word as used in the extract mean ‘vital’?

Answer: into the burning house

(iv) Which word in the extract is ‘synonymous of ‘covered’?

(i) How much time it took to control fire?

(ii) Who had not been seen since the fire broke out?

(iv) Which phrase in the extract mean ‘suddenly’?

Answer: all at once

(v) Which phrase in the extract mean ‘started crying?

(i) Where was “I” while describing above extract

Answer: In her school

(ii) Which word in the extract imply ‘school bag’?

(iii) What the speaker feared she was destined to be?

Answer: an outcast and a geek

(iv) Did the speaker like her present situation of life?

(v) Which phrase in the extract mean ‘to feel ashamed of’?

Answer: to curl up and die

(i) What activity ‘I’ had to do immediately?

Answer: to buy some clothes for school

(ii) What did ‘we’ had to immediately do?

Answer: find a place to live

Answer: grandparents of ‘I’

(iv) How were the credit cards lost?

Answer: they were burnt in the house

(v) Which word as used in the extract is antonym of ‘deposit’?

(i) ‘I’ was getting ready to go to which place?

Answer: to hurry up

(iii) Which phrase in the extract mean ‘to gather in large number’?

(iv) Which word as used in the extract is antonym of ‘strange’?

(v) How long people had been behaving strangely with ‘I’?

Answer: since past few weeks. 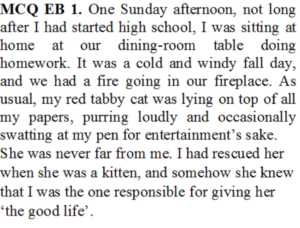 (i) The narrator was doing her homework

(a) in her school

(b) in her bedroom

(c) in her study room

(d) in her dining room

(ii) Why the cat was trying to hit the pen?

(b) It was shining

(c) For her entertainment

(d) To control her anger

(iii) According to extract the cat was always

(a) near the narrator

(b) far from narrator

(c) at a distance from narrator

(iv) Which phrase in the extract is synonym of ‘comforts’?

(c) not long after

1. It was very cold that day

2. The cat had all the freedom in the house

3. The cat had some special habits

4. Homework should not be done on dining table

(vi) The cat was with narrator since it was a

(i) Why was it dangerous to go into the house?

(a) the house had been on fire

(c) father was in the house

(ii) What did the narrator want to know about?

(iii) Other than the clothes on their body, what other things ‘we’ had with them

(v) According to extract which of the following is not true?

4. Two days ago ‘We’ had planned to be at the house of grandparents

5. It was unsafe to enter into the house 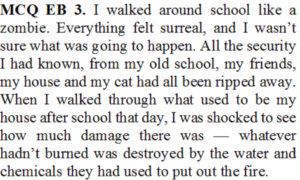 (i) What did the narrator feel about her future?

(ii) From which of the following the narrator derived security?

(iii) What feelings narrator got after seeing her house on that day?

(iv) The unburnt part of the house was destroyed by

(v) In the above extract to whom does the word ‘they’ refer to? 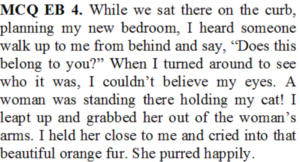 (i) In above extract to whom does the word ‘we’ refer to?

(a) narrator and her mother

(b) narrator and her neighbour

(c) narrator and her friends

(ii) What was facing the curb?

(iv) What was colour of cat’s fur?

(iv) Which word in the extract mean ‘jumped’?

Answer:  The school was new to her. It was bigger than her previous school. She felt isolated because her friends had gone to other schools. She was a senior student at her old school but now she was a freshman.

Answer:  Author felt isolated in her new school. She missed her school and teachers. So she used to visit her old teachers.

They had advised  author to participate in school activities. By doing so author could make new friends. She would also start liking her new school more than the old school.

Answer:  Author had rescued the cat when it was a kitten. They continued to be each other and play with each other. They had adjusted themselves to the habits of each other.

Thus they were close to each other.

Answer: Mother had run back into the house twice.

First time she brought a metal box that contained some important documents. On second occasion she brought photos and letters of father.

An oxygen mask was put on the face of mother to help her breathe better.

Answer:  It took about five hours to put the fire out.

The author did not see her cat throughout those five hours. She did not see the cat even after the fire was put out.  She was worried about her cat.

Answer: In the fire school uniform, books, notebooks and the bag was burnt. When she went to school she did not have any of these with her. She did not know how she would be able to handle life.

Therefore she was moving like a zombie in the school.

Answer:  Her house was almost completely burnt. Whatever part was not burnt, was damaged due to water and chemicals used by firefighters.  Her cat had gone somewhere, it was not with her.

She felt very sad at this situation.

Answer:  Their house was burnt. They did not have any belongings with them. They were not able to withdraw money from bank.  Life had suddenly become difficult but they had to live. They had to carry on with the life.

Hence this thought came to the author.

Answer:  The night after the fire they had spent at the house of grandparents. They borrowed some money from him. They rented an apartment near their house.

The author used to go to her house in the hope of finding her cat somewhere.

Answer: The weather was quite cold and windy on that day. They had kept the fireplace alive to make the house nice and warm.

While doing her homework in the dining room, the author smelled something weird. She noticed smoke coming out through seams of ceiling. These were the first indications of fire.

Answer:  Her house was completely destroyed. She was no longer going to her old school where she had many friends. She had lost her cat.

So she felt that she had suffered big losses.

Answer:  That day when author was getting ready to go to gym people were milling around her. They were asking her to hurry up. They were trying to push the author to the gym.

Usually people did not mix with her. So she found their behaviour more strange than usual.

Answer: Author was very sad after the house was burnt. She thought she had suffered a big loss. She broke down and started crying.

Monday she went to her school. She did not have uniform, books, notebooks and bag. She felt an outcast and a geek. She walked around the school like a zombie. She did not want to lead this kind of life.

Tuesday at the school, she found that a table was laid for her. This table had school books, notebooks and all kinds of clothes -all for her.  People met her and pledged their support.

Now she had friends. Later a woman brought her cat to her.

Now she changed her attitude towards life. She decided to lead a good life.

Answer:  Mother was a brave lady. Even while the house was burning, she went into it twice.  First she brought the important documents from the house. On second occasion she brought photos and letters of father of the author.

She was good planner. She immediately went to grandparents’ house for night stay. She borrowed some money from them. She rented an apartment near the house. She could easily supervise reconstruction of house from there.

She could prioritise effectively. She sent her daughter to school from the very next day of the fire. Once the fire was detected she immediately came out of the house with her daughter. She retrieved important things alone.

Thus she was a brave lady and a good planner who could set right priorities.

This content really helped. its too good for exam revision as the questions try to cover up the whole story with a benefit that its give over and over revisions to the story.
thank YOU.