REACH FOR THE TOP

The sadhu was also surprised. Yet he gave blessing as per the wish of grandmother of Santosh. The mother of Santosh was lucky that the blessing of sadhu worked. She was the sixth child in her family. She was a sister of five brothers. Joniyawas, in the district of Rewari, Haryana is her native town. It is a small village.

The girl was named ‘Santosh’ which means satisfaction.  But Santosh was not always happy with traditional systems of society. Such systems used to restrict her many times. But she started leading her life according to her own wish and style.

Santosh preferred to wear shorts. Though other girls in the village wore traditional Indian dresses. Thinking about those times, Santosh says that she had a strong determination even at that time. If she were right and logical, she would not change her thoughts. She believed that others should change their thoughts.

Parents of Santosh were rich. They owned land in their village. They had enough money to send their sons to best schools. Their sons even went to national capital Delhi for studying. Delhi was quite near to their home town. According to existing traditions of their village, Santosh went to a school of her village. Though she did not like it.

Santosh did not raise objections. She decided to fight the system silently. She was waiting for the right opportunity. Such opportunity came when she became sixteen. Most of the girls in her village would get married around this age. Parents of Santosh wanted her to get married.

Santosh had never thought of getting married at this young age. She wanted to acquire more education. She told her parents that she will get married only after getting good education. Otherwise she will never get married. She alone went to Delhi. She took admission in a school there.

Santosh always wanted to study a little more. Gradually, her father understood that Santosh had a strong desire to study. Santosh passed her 10th standard. Then she went to Jaipur. She took admission in Maharani College. She used to stay in Kasturba Hostel. From this hostel she was able to see the Aravalli Hills.

From my hostel I used to see some villagers walking up the hill. Suddenly they would disappear after a brief time. I decided to know more about it.  I went there. I came to know that those were mountaineers. I requested their permission to join their group. They allowed me. It was a pleasant surprise. They motivated me to learn climbing.

After that Santosh made regular progress to learn mountaineering. She saved money. She took admission in a mountaineering course in Nehru Institute of Mountaineering. This is located at Uttarkashi. The semester in her college was to be completed in the month of April. But it got delayed. It got completed on 19th May.

After the training, she planned many mountain climbing activities for her. Her skill in climbing mountains quickly improved. She developed an extraordinary resistance to cold weather. Now she remained comfortable event at high mountains. She had developed a strong desire, ability to withstand difficult conditions and wonderful mental strength. She repeatedly achieved success in her climbing activities.

The highest point of her success came in 1992. It was result of her hard work and sincerity. Only four years ago she had shyly requested permission of mountaineers at Arrival to join their group. Santosh Yadav was hardly twenty at that time. She became the second woman in the world to climb Mount Everest.

The climbing skill, physical fitness and mental strength impressed seniors of Santosh Yadav. She was worried about other meaning that she tried to help others. She was ready to work in a team with her colleagues. These two qualities won hearts for other climbers.

In 1992, while climbing to Mount Everest, Santosh took special care of a climber. He was about to die at a point named as South Col. Unluckily she could not save his life. But she managed to save of another climber Mohan Singh. She shared her oxygen with him. Otherwise Mohan Singh would have also died.

Within next 12 months a group of women Indian and Nepalese woman had planned to climb Mount Everest. They invited Santosh to be part of their team. Santosh accepted the invitation.

Santosh reached Mount Everest for the second time. She made a record to become the first woman to climb Mount Everest on two occasions. She secured herself and India a name in the history of Mountaineering.

Indian Government recognized her achievements. Santosh was awarded Padamshri. It is one of the very high level of awards of India.

Santosh narrated her feelings when she was actually on top of the world – at Mount Everest. It could not immediately understand the greatness of the moment. I unfurled the Indian national flag on the highest point of the world and held it high.

The feeling cannot be described in words. I could see the Indian flag flying on the top of the world. It was a moment of inner happiness. I was a proud citizen of India.

Santosh is passionate about taking good care of environment. She collected about 500 kg of waste material from the Himalayas.  She brought it down.

Maria Sharapova has some special abilities. This ability does not match with her beautiful smile and fashionable clothes. Because of that special quality, she became world number one woman tennis player. She achieved this position on Monday, 22 August 2005.

She achieved success very quickly. She was born in Siberia.  She had more abilities that people of same age. Young Maria reached the top ranking of the world in just four years as a professional player.

But her preparations to achieve success in a strongly competitive world began nine years ago. She had to sacrifice many thing to achieve success. Most of the children would not be ready to accept such sacrifices. She was less that ten years old, when she was sent away from home to United States for training.

Her mother did not get visa to travel to United States. So she had to stay in Siberia. But nine year old Maria understood an important fact of life. She will need to sacrifice many things to achieve excellence in tennis.

Maria Sharapova remembers that she used to feel very lonely. She missed company of her mother very much. Her father used work for long duration. He wanted to earn more money. This was required so that Maria could continue her training. Therefore my father also could not meet me often.

I was so young at that time. So I would sleep at 8 PM. Many students used to stay in one room. The other students of tennis would come to room at 11 PM. They would wake me up. They would order me to clean the room and arrange everything nicely.

I did not allow such incidents to depress me. Silently I became more determined to achieve success. I became mentally stronger. I learnt to take care of me. I never thought of leaving my training. I knew that I wanted to be a successful tennis player.

When you come from poor background, and you do not have wealth, the desire for success is more. You are more determined to achieve success. I have tolerated many shameful behaviour and insults than this behaviour by my room-mates. But I continued to firmly follow my dream.

Even today Maria has that kind of mental toughness. This was the main factor in her winning the women’s singles title at Wimbledon tournament in 2004. This toughness also helped her to quickly become world number one player in the next year itself.

Lot of snow occurs at the native place of Maria. Thus it has been refereed as ‘frozen plains’. Her journey for cold native place to the top of women’s tennis has impressed many fans. But the young Maria thinks that there is no scope for emotions.

She looks straight while giving answers about her ambition. It becomes sufficiently clear that she is proud of sacrifices she had made. She thinks these have given required result. She says that she is very competitive. Whatever I do, I work hard for it. It is my work. This is the mantra of her success. Based on this principle she has achieved success.

Maria Sharapova speaks with a noticeable and a strong American style. But she proudly says that she is a citizen of Russia. She clarifies all doubts when she says that she is a Russian. US has been a major part of my life. My blood is Russian. I would like to participate in Olympics as member of Russian team.

Fashion, singing and dancing are hobbies of Maria Sharapova. Usually these are hobbies of every famous teenager.  She likes to read novel written by Arthur Conan Doyle.

Maria Sharapova likes to wear nicely made and costly evening gowns. But this liking does not match with her simple food habits. She likes to pancakes with chocolate spread and a bubbling orange drink.

The personality of Maria Sharapova cannot be confined within certain description or boundaries. Her personality is quite wide. She has several qualities. She is a talented sportsperson and her desire to succeed is firm. It never decreases. She is ready to make sacrifices to achieve success. Because of these aspects she has become world number one player.

Nobody would be jealous of her and of the money she is now earning. Maria had expressed her opinion about the money she earns from tennis. Certainly money is a motivation. Tennis is a business as well as a sport. But the most important thing is to become world number one player. I continued to make effort to achieve my dream of being number one.

On Killing a Tree

It takes lot of time to kill a tree. It cannot be killed by a simple stroke of knife or an axe. Tree takes lot of time to grow. It takes it food through earth. Gradually it rises higher and higher. It consumes sunlight, air and water. Its bark is as rough as skin of a person suffering from leprosy. New leaves grow from its rough surface. 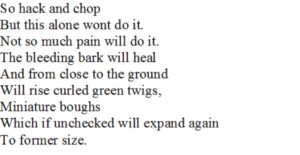 So if you cut or chop the trunk of a tree, the tree will not die. A tree does not get killed by this method. When we cut a branch or trunk of a tree, a liquid called sap comes out. It get deposited at the place where branch is cut. After some time new small and soft branches start growing from the same place. If the growth of these new branches is not controlled, these will become as big as the earlier branches. 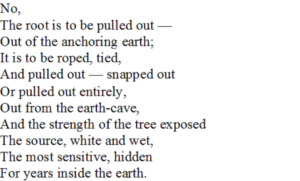 To kill a tree, its roots are to be pulled out. The earth provides support to the roots of the tree. The tree has to be tied with a rope and then pulled out with jerk. Then the roots break. Or a big pit is to be dug to take out all the roots. This big pit may look like a cave in the earth. Now we understand that the tree gets its strength from its roots. Its roots are of lighter colour and these are wet. Roots are the most sensitive part of a tree. For several years they have been below the earth but provide support to tree.

After that the branches of tree would start drying because of heat of sunrays. Because of air and sunrays the colour of tree and its leaves changes to brown. These become hard. These start twisting and decaying. Now the complete destruction of tree has occurred.