Think as you read

Answer: Franz was expected to be prepared for a test on participles.

Answer: It was very still and quiet at the school. When Franz entered the class late, M Hamel did not scold him. Hamel was wearing a ceremonial dress. On the back benches some villagers were sitting quietly.

Answer: An order had been put up at the bulletin board. It said that only German was to be taught in schools of Alsace and Lorraine.

Answer: The school was very quiet and still on that day. M Hamel was wearing his ceremonial dress. He was very kind to all students. He was very emotional. At the back benches many villagers were sitting. It was the last lesson in French. From the next day, German was to be taught.

He felt sorry for himself because he had not learnt his lessons properly. Now his books looked like his friends.

Now he felt emotionally attached to M Hamel. Franz forgot about ruler and cranky ways of teaching of Hamel.

Answer: Several elderly people of the town were sitting in the class. One of them had even brought his primer book. M Hamel, the teacher, was unusually calm. Students were eager to learn more and more. All these indicate that people loved their language.

It was suddenly ordered that German will be taught in school. People of the town had become emotional about their language and they realised their love for French.

Answer: Franz understood that people of Prussians wanted people of the town to learn German. Eventually everybody would be speaking German language. At this point he makes the statement.

This statement of Franz is a satire on the order issued by Prussian. It can even mean that whatever they try, the language of the all the people cannot be changed. Some innocent people would continue to speak their native and natural language.

Talking about the text

Answer: It had happened in India. The Mughals had introduced Urdu in India. Most of the official work was being done in Urdu language. Till about 50 years ago, many native elderly people did not how to read and write Punjabi language. But they were proficient in Urdu.

The British had introduced English language in India. It is slowly overtaking other languages of India.

There are many examples across the world when a conqueror had imposed their language on native people. Germans, USA, Russia and England had done this. 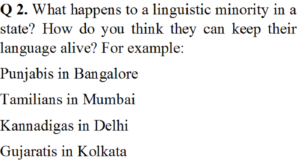 These are some of the means through which they keep their language alive.

Answer: One should take pride in one’s own language. In fact it comes so naturally to everybody.

Let us understand that the world around us is changing at a very fast pace. People have moved to different places. This is true with respect to a town, city, state, country and the whole world. Mixing of people has brought about a change in the language. Many times the need of a common language becomes essential.

Under these circumstances changes in language is naturally happening almost everywhere in the world. 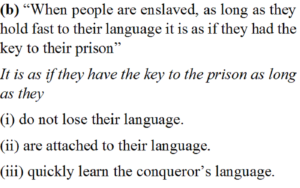 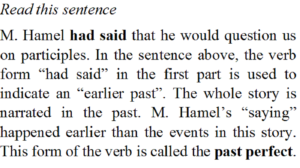 1. He had never explained everything with so much patience.

Reason – The act of explaining happened before it was noticed.

2. The hopvine that he had planted himself twined about the windows to the roof.

3. M Hamel had said that he would question us on participles

Reason – The act of saying had happened earlier

4. Hauser had brought the old primer.

Reason – The act of bringing the book had occurred before it was noticed.

5. When I had got a little over my fright.

Reason – He had overcome his fright prior to next activity.

This is to inform to all students that sports day will be celebrated in the school on 5th Feb 20xx during school hours. Academic classes will not be held on that day. Students should register their names with respective class teacher. List of events has been pasted in every class.

Language connects people. Most of the people feel emotionally closer and friendlier if they talk in their native language. Knowing one more language gives access to one more set of literature. It enhances our thought process. It builds our vocabulary. It helps ourselves in connecting with more people.

Gone are the days when people used to stay at their native place. People move out. It could be for travel, for study, for job or for business. Knowledge of an additional language comes very handy in such situations.

In fact knowledge of an additional language during school days, orients one to acquire more languages. Thereby giving an additional edge over others.

Therefore I am in favour of introducing learning of third language in schools.

Nowadays, academic curriculum of school has become very wide. Contents of each subject has become thick. A student is finding it difficult to study everything. Many educationist are advocating reduction in curriculum.

School authorities put pressure on students to get more marks. The fierce competition beyond the school has put lot of stress on students. Add to it the pressure from parents on the students.

The time available to engage in sports and recreational activity has greatly reduced. Nobody would limit journey of a child between classroom in his school and his study room at home. Let there be an opportunity to look beyond these two compartments.

In this back drop, compulsion to learn one more language would be an additional burden on students. I do not advocate it.

We live on 3rd floor of a multi-storied building. My father works in a town about 175 KM away. He comes home every week end.

Next to our flat lives a young couple of about 35. Early morning they go out together in their car and return late in the evening. They do not mingle with others. The lady never replied to my greetings. Somehow I developed a disliking towards the couple.

One day my mother fell sick. It was around 10 PM. She had high fever. I called many people in the society but none answered my call. Finally I called the couple living next to me.

Immediately they took my mother to hospital. Handled all expenses themselves. They both were in the hospital till my father arrived next morning.

My mother soon got well. My parents and I went to their home to express our gratitude. We understood that they worked as high officials in a reputed bank. Every day they go to a orphan house to help kids learn English. They have devoted all their spare time for this activity.

My thought towards them changed for the better.