Answer: The House of Abdul Kalam was on the Mosque Street of Rameswaram town in Tamil Nadu.

Answer: Dinamani is name of a newspaper. Abdul Kalam used to read about World War in headline of Dinamani. Thus we conclude that it was a newspaper.

Ramanadha Sastry took over the priesthood of the Rameswaram temple from his father.

Aravindan started the business of arranging transport for visiting pilgrims.

Sivaprakasan became a catering contractor for the Southern Railways.

Answer: Yes. Demand of tamarind seeds had suddenly increased during Second World War. Abdul Kalam had earned some money by selling seeds of tamarind to a local provision shop.

Father: He did not have formal education nor much wealth. But he was a wise as well as a kind person. He avoided unnecessary comforts and luxuries.

Mother: She was a true helping hand to my father. She was generous. Every day she gave food to many people. Number of such people was more than number of family members.

Himself: I was a short boy. I did not have any distinguished appearance.

Answer: He inherited honesty and self-discipline from his father. He inherited faith in goodness and deep kindness from his mother.

Answer: Abdul Kalam has talked about two social groups – Muslims and orthodox Brahmins. These groups were easily identifiable by their dress. Abdul Kalam wore a white cap on his head. His friend Ramanadha Sastry wore a sacred thread.

Answer: They were not aware of their differences. They naturally shared their friendship. Bedtime stories narrated to Kalam by his mother and grandmother included stories from Ramayan and life of Prophet.

During Shri Sita Rama Kalyanam ceremony, people from all groups used to work together. The Ram Tirtha pond was near the house of Abdul Kalam.

Answer: Kalam talks about two people who were aware of the differences between the groups. The first was the new teacher who came to school when Kalam was in fifth standard. The second was the wife of his science teacher.

Kalam talks about two people who tried to bridge the gap. The first was his science teacher Sivasubramania Iyer. The second person was Lakshmana Sastry, the head priest of Rameswaram temple.

Answer: A new teacher  came to school when Kalam was in fifth standard. He did not like that a Muslim boy should sit with a Brahmin boy Ramanadha Sastry. He asked Kalam to sit in the last row of the class. Father of Ramanadha Sastry was Lakshmana Sastry. He was the head priest of the Rameswaram Temple. He called the school teacher to correct his thoughts. The teacher complied.

Answer: His father told Abdul Kalam that it was necessary for Kalam to leave the town for his development. Even seagulls leave their home to fly alone across the sun. They do not have a nest at that time.

His father convinced mother of Abdul Kalam by quoting saying of Khalil Gibran. He had explained that though children are born of their parents but they need not  possess the same thoughts as that of parents. Children should build their own future. Their expectations from life and the meaning of life itself is unique.

Answer: Words spoken by Abdul Kalam’s father are pieces of wisdom. It means that children have the ability to write their own destiny. Parents should support them in their efforts. Parents should accept that their children may not align with their thought process. They can think independently and differently.

He had spoken these words to convince his wife. He wanted his wife to happily give permission to Abdul Kalam to leave the town for higher studies.

Sentence: For reasons I have never been able to understand, a sudden demand for tamarind seeds erupted in the market.

Sentence: Half a century later, I can still feel the surge of pride in earning my own money for the first time.

Sentence: My brother-in-law Jallaluddin would tell me stories about the War which I would later attempt to trace in the headlines in Dinamani.

Meaning of word: To find, To search

Sentence: I was one of many children — a short boy with rather undistinguished looks, born to tall and handsome parents.

Meaning of word: Special, Extraordinary in appearance or manner

Sentence: The first casualty came in the form of the suspension of the train halt at Rameswaram station.

A huge fire erupted in the market.

This volcano erupted after being inactive for more than 50 years.

A widespread violence erupted in the main part of the city.

Rashes erupted on my skin because of food poisoning.

Due to storm there is surge in water level of sea.

My laptop crashed due to sudden surge in electric current.

Profits of our company have surged this year.

Answer: The word trace can have following meanings

(c) To copy by superimposing

(e) To discover the cause

In the lesson the closest meaning of ‘trace’ is ‘to find’.

In yesterday’s competition the prizes were given away by the Principle.

In spite of financial difficulties, the labourers were paid on time.

On republic Day, vehicles are not allowed beyond this point.

Second-hand books are bought and sold on the pavement every Saturday.

Election to the Lok Sabha are held every five years.

Our national Anthem is composed by Rabindranath Tagore. 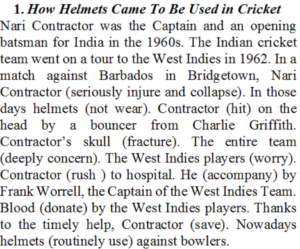 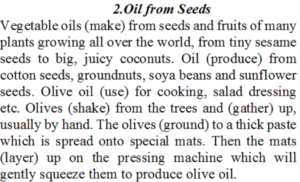 Vegetable oils are made from seeds and fruits of many plants growing all over the world, from tiny sesame seeds to big, juicy coconuts. Oil is produced from cotton seeds, groundnuts, soya beans and sunflower seeds. Olive oil is used for cooking, salad dressing etc. Olives are shaken from the trees and gathered up, usually by hand. The olives are grounded to a thick paste which is spread onto special mats. Then the mats are layered up on the pressing machine which will gently squeeze them to produce olive oil.

NO MEN ARE FOREIGN

Answer: the word ‘uniform’ in this poem means the uniform worn by soldiers.

Answer: All people in the world breathe, sleep, wake up, hate and work hard in similar ways. Importance of air, sunlight, moon and Mother Nature is similar to all people of the world.

Thus the poet says that all people on the earth are same.

1. We have similar body structure

2. We breath the same way

4. We have the same earth to live on

5. We all die in similar way

We should never get carried away by such people. We should apply our own wisdom to avoid such behaviour.

Poet advocates that a feeling of brotherhood should prevail throughout the world. All people living on the earth are similar.