It was season of spring and a day of festival. The weather was cold. Several people were walking on roads and pathways. They all looked happy. They were wearing good clothes.

Some people were walking. Some were riding on horses. Some were being carried in platforms made by bamboos. Some were travelling in bullock carts. Author wants to say that almost everybody of the town had come out of their houses. A person was walking with his little son. Father was walking while the boy had to run to keep pace with his father. Height of the boy was less than the height of legs of his father. They boy looked very happy.

They boy was highly impressed and attracted to toys placed in the shops. His parents had to repeatedly ask him to move forward.

The boy obediently and quickly walked towards his parents. But he was still looking at the toys in a shop that had gone behind.

The boy came running to his parents. They had stopped for a while to wait for him. He could not control his desire to purchase that toy. Although he was aware that his parents will refuse to buy.

The boy requested that he wanted to buy that toy. His father looked at him with his red eyes. Father normally behaved like a dictator. His mother was a bit soft because it was a day of festival. She was kind to him. She asked him to hold her finger and advised him to look ahead. She did not want him to look towards shops.

In the fields yellow flowers had grown on crop of mustard. It looked as if gold has been melted and poured on a large area. The area of field was fairly plane. It did not have much undulations or slope.

A group of dragon-flies was moving around. Their wings were of dark purple colour. Many times they crossed the path of a bee or a butterfly. Bees and butterflies had come to the field in search of sweetness of flowers.

The child looked at dragon-flies while they were flying in air. He continued to follow these till one of them sat somewhere. Then he tried to catch it. But he could not catch any. These would again move into the air before being caught. Probably he moved on the road while trying to catch a dragonfly. So his mother advised him to walk on footpath only.

He happily ran towards his parents. For a short period of time he walked ahead of them. But very soon he was once again behind them. This time he was attracted by insects and worms. These were coming out in large groups from their place of hiding. Probably they also wanted to enjoy the good sunshine of the day.

His parents sat in the shade of a small group of trees. There was a well in the shade. They were sitting on the edge of a well. They called their son to come to them. He came running.

When the child came in the shade of grove, many small flowers fell on him. He forgot about presence of his parents. He started collecting petals falling from trees in his hands.

Now he heard the voice of a dove. He was very excited to hear the voice. He ran towards his parent shouting ‘The Dove’. He forgot that he had collected petals in his hands. So all the petals fell on the ground.

Now the child had gone behind a banyan tree. Several wild flowers had grown there. Parent called the child. Together they started walking on narrow curved footpath. That footpath was leading through the fields of mustard to the site of fair.

When they reached closer to the village of the fair, the child saw many footpaths leading to the fair. Each footpath was full of crowd moving towards fair. It was huge movement of people. The child was afraid. He was also attracted towards such a big gathering of people. Because of the large crowd there could be many confusions in the fair.

A seller of sweets was shouting names of various sweets available at his shop. This shop was at the corner near the entrance of the fair. A big crowd had already gathered in front of his shop. He had nicely arranged sweets at his counter. These sweets were decorated with leaves of golden and silver colour.

The child looked at burfi without closing his eyelids. It was his favourite sweet. He slowly whispered that he wanted to eat burfi. But he was almost sure that his request will not be accepted. His parent would tell that he was greedy. So he did not wait for an answer from his parents. He kept on moving. 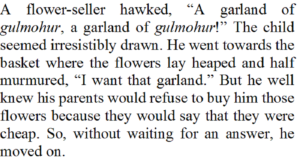 A seller of flowers was shouting to sell gulmohur flowers and garlands made of these flowers. The child could not control himself and he was attracted to the shop. He went towards the basket where flowers were kept. He softly said that he wanted to buy that garland. He was sure that his parent would not buy it for him. They would say that it was not a good garland. He did not wait for any answer from his parents. He kept walking.

A man was holding a pole and standing near it. Balloons of various colours were tied on the pole. These looked like a rainbow. The child was fully attracted towards balloons. He had a huge desire to buy all the balloons.

But he was sure that his parent would not buy these for him. They would say that he was now a grown up child. He should not play with balloons. So he continued to walk away from balloons.

A snake charmer was playing a flute. In the basket a snake was sitting in shape of a circle. It had raised its head in the style of the neck of a swan. It appeared that the music was entering into its invisible ears. The music was like the sound of water in a waterfall.

There was a swing that was moving in circular fashion. Many kids, men and women were riding that swing. They moved in a fast circular motion. They shouted and laughed loudly.

The child carefully looked at them. Then he made a courageous request to his parents. He wanted to ride that roundabout.

The child did not receive any reply from his parents. His parent were not ahead of him. He looked back and to his sides. He did not see his parents.

He was now afraid, his throat became dry. He started crying loudly. Suddenly he started running. He was crying because of fear. He was shouting for his mother and father. Hot tears started coming down from his eyes because of fear. His face became red. Since he was crying, his face looked distorted. It was also shaking.

He was very afraid. he ran to one side. Then he started running in various directions. He did not know in which direction he should go. She started shouting for his parents. He cried loudly. His yellow turban opened. His clothes became dirty.

He run in all directions and every time he came back to his original position. He could not find his parents. He accepted his defeat. His cries now converted into sobs. At a small distance there was green grass on the ground. Through his eyes covered by tears, he saw that some men and women were talking to each other.

He again quickly ran to a place of worship. Lot of people were there. Every space there was overcrowded with people. He ran between legs of people. His height was small. He was sobbing and continued to shout for his parents.

Near entrance to the temple, there were so many people. It was really overcrowded. People pushed each other. They were really big people. Their eyes were shining and they looked angry. They were really strong people. Meaning that he found difficult to move through the crowd.

The helpless child was struggling to push himself through legs of people. But he fell down because of movement of people. People might have crushed him under their feet. But he shouted in loudest voice for his parents.

In the crowd that was increasing, a man heard cries of the child. With great difficulty, he bent low and lifted the child in his arms.

The man moved away from the crowd. The man asked him how he came there. Who are your parents? The child started crying more loudly. The only thing he said was that he wanted to meet his parents.

The man now came to the place where snake charmer was sitting. He was still playing his flute and the cobra snake was moving sideways. The man requested the kid to listen to the music. The child shut his ears with his fingers. He shouted very loudly, almost twice high, that he wanted to meet his parents.

The man took the child to the place where balloons were being sold. He thought that attractive colours of balloons would divert attention of the child. So he may become calm. But the child turned his eyes from balloons. He continued to cry and told that he wanted to meet his parents.

The man still wanted to make the child happy. He took the child to the gate where flowers were being sold. The man told him that smell of those flowers was nice. The man asked the child if he wanted to put a garland around his neck. The child turned away from the basket of flowers. He again started crying. He said that he wanted to meet his parents.

The man thought that a gift of sweets will make the unhappy child happy. So he took the child to the sweet shop. The man asked what sweets he would like to eat. The child did not look at sweets. He continued to sob. He told that he wanted to meet his parents.

Thanks a lot
It was really very helpful

It is very helpful to all
Who seen this

Yes really it was very helpfull

Thank you so much

Thank you so much