Answer: Once the peddler was thinking about his rattraps. Suddenly an idea came to his mind that in this world everybody is running to achieve happiness, shelter, food and richness. This is exactly similar to the bait put in a rattrap. So he concluded that the whole world is a rattrap.

Answer: The world had never been kind to him. He imagined that the world is running after happiness, joy, food and shelter. So everybody was trapped in a rattrap. This thought gave him an unwonted joy. He was therefore amused to think that the whole world was a rattrap.

Answer: The peddler was used to people making sour faces at him. But the crofter gave him food. He played cards with him and talked a lot to him. He allowed him to stay at his cottage in night.

The peddler had not expected that kind of hospitality.

Answer: The crofter was living alone in the cottage. He was feeling very lonely. Therefore the crofter was happy to have someone to talk to in his loneliness.

Answer: The crofter had told the peddler that he had received thirty kroner recently. Crofter thought that the peddler did not believe this.

To assure the peddler  that he was speaking truth about the money, the crofter showed  money to him.

Thus the peddler did not respect the confidence reposed in him by the crofter.

Answer: After stealing money from the crofter, the peddler had fear of getting caught. So he tried to escape through the forest. But he lost his way. He was walking around the same place.

At this juncture the peddler thought that he had fallen into a rattrap.

Answer: At the forge, the ironmaster made a mistake in recognizing the peddler as his old regimental comrade. He was sad to see his poor conditions. He wanted to help him.

Thus the ironmaster behaved kindly with the peddler.

Answer: The peddler knew that he was not the old comrade of ironmaster. He was worried about the money he had stolen from the crofter. He thought going to house of ironmaster could be like entering a lion’s den.

Because he was afraid, he declined the invitation.

Answer: Edla had talked to the peddler with compassion. She told him that they would like to have him at the house just for the Christmas Eve. She had assured him that he would be allowed to leave freely whenever he wanted.

Basis above assurance, the peddler accepted the invitation.

Answer: When Edla met the peddler near the furnace, she noticed that he was frightened. She thought that either he had stolen something or had run away from prison. She had a doubt if the peddler was an educated person.

Answer: Next morning the tramp had taken bath, had a haircut and shaved his beard. He was wearing the suit of the ironmaster. So dressed up he came to the dining room. Now the ironmaster realized his mistake.

So it was not his fault.

Answer: Edla was a very sympathetic lady. She thought they had invited the peddler to stay with them for the Christmas Eve. Therefore it would be improper to send him away without giving him feast of the festival.

Answer: Leaving a gift for Edla meant that peddler was now a changed person. Edla felt relieved and happy to note that her sympathy had brought about such a good change in the peddler. Now she will not be blamed for giving shelter to a thief. Rather she will be appreciated for bring about change in a person.

Answer: Peddler thought that the crofter welcomed him because he was alone. Crofter wanted to have someone to whom he could talk to.

The peddler considered Edla a truly kind and compassionate lady. He was so much affected by her that he became a changed person. He indicated this change by signing the letter as captain von stahle.

Answer: The ironmaster had wrongly recognized the peddler as his old comrade. Edla had recognized him as a person who had either stolen something or had run away from jail. So the judgement of daughter was better.

The ironmaster could not bring the peddler to their home. Edla was able to convince the peddler to come to home. So Edla had better power of persuasion.

When ironmaster understood his mistake, he wanted to handover the peddler to Sheriff. But Edla conducted herself with sympathy and asked the peddler to remain there for Christmas. She also told the peddler that he can keep the dress he was wearing. This shows that ironmaster was of impulsive character while his daughter was full of kindness.

Elda was very happy to receive the gift from the peddler while ironmaster did not express anything. She was happier to note that the person had changed for good. Thus the daughter had emotions but her father did not have any emotions.

Answer: The peddler was used to people making sour faces at him. Hospitality of the crofter was a surprise to him.

The crofter had showed lot of confidence on the tramp while showing his currency notes. But the peddler did not respect confidence of his host and stole the money. This was a surprise to crofter.

When ironmaster realized that the tramp was not his colleague, it was surprise to him.

Ironmaster wanted to hand over the tramp to Sheriff. The peddler had not expected such turn of events. So it was a surprise to peddler.

Ironmaster wanted to hand over the tramp to Sheriff. But the daughter interceded and stopped the peddler going away on Christmas. This was a big surprise to the peddler.

Peddler left the house of ironmaster without stealing anything.  It was a surprise to father and daughter.

Towards end of the story, the peddler had changed for the good. He left a gift for Edla. He left the stolen money to Edla with a request to return to the crofter.  This was a surprise to Edla and ironmaster.

The peddlat had signed the letter as Captain von Stahle. This was a surprise to Edla and ironmaster.

The peddler was deeply impressed by her kindness and hospitality. This changed his heart and he became a better person.

Answer: Most of the human beings are engaged in acquiring wealth, comfort and other pleasures. It becomes very difficult to come out of such a race. On one side human beings chase for these worldly things, on other hand they miss happiness and togetherness. The worldly pleasure serves as bait and people get trapped circling around these. It actually becomes a vicious circle. This is the predicament of human life.

Answer: The peddler used to roam around in the country selling rattraps. One day he started thinking that human beings are running after worldly pleasures and wealth. And they are not able to come out of their pursuit. Thus he called the whole world as a rattrap. This thought amused him a lot.

This is the only situation through which peddler derives some kind of humour.

Answer: The peddler was extremely poor. He used to sell rattraps made out of wire. It was difficult for him to make two ends meet. He was forced to beg and indulge in theft. He did not have home. He used to sleep along the road. Because of his poor living condition the peddler earns sympathy. This is during initial part of the story.

During middle of the story, an old crofter gave him shelter at his home. He was given good hospitality. The crofter showed confidence in him. He even showed his money to peddler. However when peddler betrays the trust and steals money of the old crofter, he losses sympathy.

In the later part of the story, the ironmaster threatens him to hand over to Sheriff. There was no fault of the peddler. Once again sympathy is generated for him.

Lastly, he changes for the good and leaves a gift for Edla. He left the stolen money for Edla with a request to return it to the crofter. This act certainly earns lot of sympathy towards peddler.

Therefore, except on one occasion, sympathy of the reader is always with the peddler.

Answer: The peddler was all alone in the world. He did not know anybody with whom he could interact. He had been moving from one place to another. He had become used to seeing sour faces of people.

It is very clear that the crofter was living alone. He was so eager to talk to a person in his loneliness that he extended excellent hospitality to his guest.

Edla appears to be not having any company at all. Her thought process was very much different from that of her father. It is doubtful if she talked much with her father. Thus she was certainly lonely in her house.

Thus throughout the story, loneliness of various characters has been brought about.

Answer: Students should answer this question themselves.

Answer: The story has been narrated quite nicely. There are interesting situations in the story. The dialogues are precise and invite attention of the reader. The full story has been nicely woven together. Some elements of surprises have been built into the story. Moreover the story ends on a happy note. All these make the story quite interesting.

The aspect of rattrap has been philosophically connected to the pursuit of worldly pleasure. World offers so many temptations or baits, that we may fall into its trap any day. The peddler’s attempt to curse the ironmaster brings another philosophical attitude. The kindness and hospitality by Edla on the Christmas Eve highlights yet another part of philosophy. And finally, the impact of kindness to change a person is clearly magnified.

Thus the story is entertaining as well as philosophical. 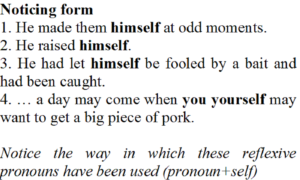 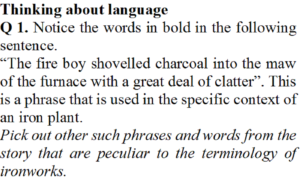