The narrator (Franz) got late at his home for the school. Mr. M Hamel is the teacher at school. Franz had a fear that he would receive rebuke from his teacher. Because teacher would ask question about participle and Franz did not know anything about these.

Franz thought of not going to school. He thought of spending the day in the open. Weather was warm and shiny. At the edge of the jungle birds were making noise. In the open field, German soldiers were exercising. All this was more attractive than rules of participles. But Franz did not do that. He quickly went to school.

Franz walked past town hall. He saw a crowd in front of notice board. Since last two and a half years, notice board displayed bad news. The battles lost by France. The orders to join army. The orders of the head of Prussian army. Franz did not stop at the town hall. He wondered what could be the matter.

Then Franz walked quickly towards school. The blacksmith Wachter was reading the bulletin. His trainee was also with him. Wachter called Franz and told him not to hurry. Wachter further told Franz that he would reach school before time.

Franz thought that Wachter was joking about him. So he kept walking quickly. Franz was breathing fast when he reached the garden of M Hamel.

Most of the times, at the beginning of school, there used to be lot of activities. Sound of these activities could be heard in the street. Sound of opening and closing of desks. Sound of reciting the lesson together. The recitation used to be together in loud voice. Students would close their ears with hands. Teacher used to strike his ruler repeatedly on the table.

But there was no noise. Franz had depended upon the noise and activities to reach his desk without getting noticed. But that day everything was quiet – as if it was a Sunday. (School remains closed on Sunday, so it is quiet on Sunday) M Hamel was walking up and down in the class. He had his fearful ruler in his hand.

Franz opened the door. Everybody noticed him while he went to his desk. He felt shy and feared. But nobody said anything to him. His teacher M Hamel saw him. He spoke very kindly to him. He asked him to go to his desk. He further said that they were about to start the class without Franz.

[All these are indications that something had changed. Everybody was serious. Franz noticed these changes.]

Franz sat on his desk. He took some time to overcome his fear. After that he noticed that his teacher was wearing a different dress that day. He was wearing a beautiful green coat, a frilled shirt and a small cap of black colour. All these had embroidery on it. He wore this dress on inspection and special days only.

[This was a further indication that something had changed.]

Additionally, the school was looking strange and formal. Franz was more surprised to see people sitting at the back benches. These benches normally used to be empty. Today villagers were sitting there quietly. Old Mr. Hauser was wearing hat. Former mayor, former postmaster and many others were also sitting in the class.

Everybody was sad. Mr. Hauser had brought his book of primary class. Edges of the book were worn out. He had opened this book on his knees. His spectacles were on pages of the book.

Franz was trying to guess what had happened. Meanwhile, M. Hamel sat on his chair. He said in a sad and gentle voice that this is the last lesson he would teach us.

M Hamel informed that an order had come from Berlin. In all schools of Alsace and Lorraine towns, the teaching had to be in German medium. The new teacher would be coming tomorrow. He further informed that this would be our last lesson in French. He requested us to pay attention.

These words were a shock to Franz. He calls Germans scoundrels. Now he is able to understand about the notice at the bulletin board.

Franz is talking to himself. My last lesson in French. I do not know how to write French. He thinks that he should have learnt more. He wants to learn more. He regrets going in the jungle for picking eggs. He regrets going for a ride (boating) on the Saar river.

Now Franz thinks that his books were his friends. Earlier he used to think that these were a problem for him. He did not want to give up books. He also understood that M Hamel would be going away from school. Franz will never see him again. So he forgot everything about his ruler and his strange behaviour. 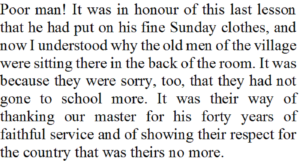 While Franz was thinking, his name was called. He wanted to recite his lesson correctly. He was ready to give everything he had to correctly recite rules of participle. But he got confused. He stood silently at his desk. He did not have the courage to look up and see his teacher.

M Hamel told Franz that he will not scold Franz. You must be feeling bad. Every day we tell ourselves that we have lot of time to study. I will study tomorrow. And now you have understood that there will be no tomorrow.

M Hamel continues. That is the big trouble with people of village Alsace. People postpone learning to next day. And now Germans will tell you that you do not know how to read or write French. So why should you call yourself Frenchmen. But Franz, you are not the worst. We all need to repent ourselves.

M Hamel continues. Your parent were not serious about your education. They used to put you on some work to earn money – on a field or a mill. I am also to be blamed. I used to send you to my garden for watering flower plants. When I went for fishing, I used to give you holidays.

M Hamel continues to talk many things about French language. He says that French is the most beautiful, clearest and logical language in the world. We must continue to speak French and always protect this. He says that when we continue to be attached to our own language, we have the key of our prison.

[By the last sentence he means that Prussian have occupied their village. Now they have ordered to use German as medium of teaching in schools. Both acts are as good as putting people in prison.] 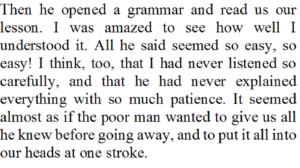 Now M Hamel taught us grammar. Franz was surprised that he understood the lesson. It was very easy. Franz thought that he had never listened so carefully and Hamel had not explained so nicely. It appeared that Hamel wanted us to teach everything he knew. He wanted us to understand in one attempt.

[Author is trying to say that everybody felt so devoted and attached to their country and town.]

Franz continues to think. One should have seen that everybody started writing earnestly. It was so impressive. It was very quiet in the class. Nobody was talking. One could hear sound of pen writing on paper.

Frenz describes further. Some beetles came into the class room. Nobody got disturbed. The young little kids were also writing their cursive writings. On the roof one pigeon made a sound. Franz wondered if Germans will order pigeons to sing in German medium. (This is a satire)

Whenever Franz looked up he noticed that M Hamel was sitting in chair. He was not making any movements. He was staring at things in the classroom one by one. Hamel was trying to see how things looked in the class room. (It means that Hamel had become emotional. He felt attached to everything in the classroom.)

Franz continues to think. Imagine, Hamel had been in the same classroom for forty years. His garden was outside the window and his class was in front of him. All are still at the same place.

Franz describes changes in last forty years. The benches and desks had worn out. These were smooth now. The walnut tress had become taller. Hamel had planted hopvines in his garden. These had grown. These had taken support of windows to climb up to roof. Nothing else had changed.

Franz continues to think. Hamel’s heart must be feeling very sad to go away. His sister was doing packing on the first floor. All could hear that sound. Because they were leaving the country next day.

Franz describes. Franz was very sad but on that day he listened to all the lessons till their end. Franz says that this showed his courage. After lesson of writing, Hamel taught them history lesson. After that small kids recited a rhyme.

Franz describes. Mr. Hauser had put on his spectacles. He held his book of primary class in both hands. He was trying to recite spelling of words. He was crying. His voice was shaking. He was full of emotions. His voice was very funny (different). Everybody in the class room wanted to laugh and cry. (Example of mixed emotions) Franz remembered his last lesson.

Franz describes. Suddenly, it was 12 O’clock by the clock at church. Prayers started at church. Prussian soldiers were returning from their exercise. Their bugle made sound near the window of class room. Hamel got up from his chair. He was looking yellow. He appeared very confident.

Hamel started saying, “My friends .. But something stopped him. He could not continue.

Franz describes. Then Hamel turned towards blackboard and took a piece of chalk. Taking support of all his power he wrote – Long Live France. He wrote in very large words.

Hamel stopped and supported himself against the wall. Without speaking any word he indicated, “School is dismissed – you may go”.

[Please note he does not say that class is dismissed. He wanted to say that the school was now closed.]