THE TALE OF MELON CITY

I am narrating this poem about a city whose King favoured justice and he remained calm. The King ordered that a big gate or arch be constructed in the city. This will be symbol of his victory. This arch was to be constructed on the main road of the city. The King thought that it will improve beauty of the city for all residents and visitors.

The King ordered to stop hanging of the chief of builder. He believed in justice. His face had become more calm now. He ordered that instead of the chief builder, all the workmen should be hanged. The workmen were surprised at this new order. The requested the King to listen to their plea. They said the mason had made bricks of wrong size..

The King orders to call the masons. The masons came and stood in front of the King. They were trembling because of fear. They said that they did not make any mistake. It is the fault of architect.

The King ordered that the architect should be hanged. The architect reminded one small thing to the King. He said that the King had made some changes in the design made by him.

After listening to the architect the King suddenly became very angry. Actually he became so upset that he almost lost his calm. But he was a justice loving and calm King so he quickly controlled himself. He said that this situation was very complicated. I need to consult a wise person. Please call the wisest person of this country.

The wisest man of the country was found and brought before the King in his Royal Court. Actually he was very week. He could neither walk nor see. So he had to be carried to the Royal Court. He was considered wisest person because he was the oldest person. He said in a trembling voice that the culprit must be hanged. Actually the ach had struck against the head of the King, so the arch should be hanged.

A platform for hanging of the arch was made and the arch was brought upto that platform. Suddenly one of the ministers said that we should not hang the arch. It has touched the head of the King. Thus it has blessed the King. The King carefully thought about it. In the meantime the crowd had become impatient. Everyone was talking slowly. But collectively their voice had become loud.

The King understood the mood of the crowd that it wanted the culprit to be hanged. The King became excited and equally eager. To all the people who had gathered there, he said that we should postpone the minor aspect of finding out the guilty. The country wants that somebody should be hanged. So we must immediately hang someone.

A rope was put up on the platform. It was set up a bit high. Each person present there came to the noose to measure one’s height. But height of only one person was found to be equal to that of the noose. That person was the King himself. Therefore as per the order of the King of the country, he was hanged. 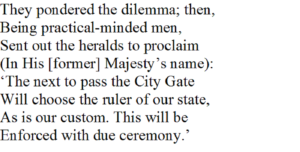 The ministers thought about the difficult situation because of the death of King. They were very practical person. They quickly thought of a solution. They asked messengers to move around the country. By the orders of the former King, they were ordered to make an announcement in the public. The order was that the first person to enter the city will select the King of the city. This was the custom of their city. The order further declared that a new person will be made King in a big ceremony.

A man crossed the gate of the city to enter into the city. He was a fool. The guards stopped him. They asked him who should become the King of this city. The man replied ‘a melon’. He liked melons. So to every question this was his answer.

This event or story had occurred a long time ago. Many outsiders ask people of the town why a melon is their King. How did a melon become your King. They reply that it is because of the custom of the town to choose a king. That customs was decided by our King.

The people said they are OK if their King is a melon. We are not bothered who is our king if we are not troubled and our freedom is not disturbed. The principle of accepting whatever has happened was in the mind of the people.