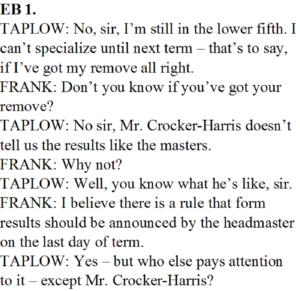 (i) What does the word ‘masters’ mean in the above extract?

(ii) According to rules, who is required to announce the results?

(iii) Who is the only teacher to follow the rule about announcement of result?

(iv) Of which class Taplow is currently a student of?

(v) When should the result be announced?

(i) first day of the term

(ii) mid-day of the term

(iii) last day of the term

(iv) any day of the term 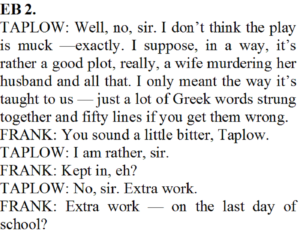 (i) Which play Taplow is talking about?

(ii) Which of the following is not true about the book being taught to Taplow and other students?

(a) The book has lot of Greek words

(b) Students are punished for not knowing Greek words

(c) The book is not taught in an interesting way

(iii) According to Taplow, does the book have a good story?

(iv) Why had Taplow come to school on the last day?

(a) he was punished

(b) he was called for extra work 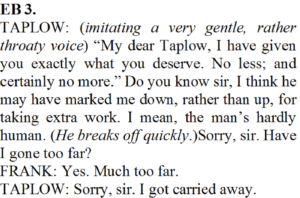 (i) Which of the following word is not synonym of the word ‘gentle’ as used in above extract?

(ii) The expression ‘much too far’ has been used in the extract. Which of the following expression is incorrect in respect of word ‘much too ’

(b) much too large

(c) much too bright

(d) much too books

(iv) ‘I have given you exactly what you deserve.’ To whom does the word ‘I’ refer to in this line?

(v) Who is the author of the lesson from which this extract has been taken? 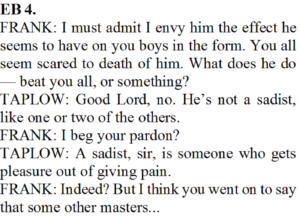 (i) Which of the following remark is not made by Frank about Mr. Crocker-Harris.

(b) You all seem scared to death of him.

(c) Does he beat you all

(ii) To whom does the word ‘masters’ refer’ to?

(iii) Who according to Taplow is a sadist?

(a) one who punishes others

(b) one who helps others

(c) one who gets pleasure out of giving pain

(d) one who does care for his students

(v) Which of the following is not the synonym of the word ‘admit’ as used in the extract? 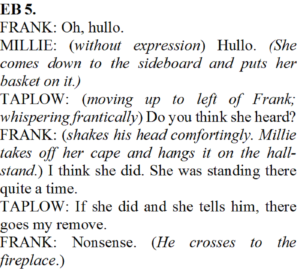 (i) According to Taplow what would have happened, if Millie heard had his remarks?

(a) she would have beaten him

(b) Harris would have failed him

(c) Frank would have not supported him

(d) He was worried without any reason

(ii) Who was Millie?

(a) a teacher in the school

(b) headmistress of the school

(iii) What was Millie carrying in her hand?

(v) The expression ‘quite a time’ has been used in the extract. Which of the following expression is incorrect in respect of word ‘quite a ’

(a) quite a crowd

(b) quite a noise

(c) quite a comedy

(d) quite a table

Answer: According to rules of the school, the headmaster announces results on the last day of the school. Mr. Harris was a rule abiding teacher. Hence he did not announce the result.

Answer: Frank taught science is the school. Students getting lower mark used to opt of science subject while those scoring higher marks opted for other subjects. Thus he was unhappy because he used to get slackers in his class.

Answer: This book was not being taught nicely to the class. The book had so many Greek words strung together. If any student got a word wrong, they had to write fifty lines of the book.

Answer: Taplow had missed a class during the previous week. To teach him the lesson of that day, his teacher Mr. Crocker-Harris had called Taplow for extra hours.

Taplow did not consider this a punishment.

Answer: Mr. Crocker- Harris did not disclose the marks obtained by Taplow. He had told, “I have given you exactly what you deserve. No less; and certainly no more.”

Answer: Taplow did not have the courage to cut his teacher. He was not sure what would happen if he left the school. Mr. Harris could follow him to his home or do something else.

Answer: Frank was envious of Mr. Crocker-Harris because of the effect he had on students. He thought that students were scared to death of Mr. Crocker. He had a doubt that Mr. Crocker used to beat his students.

Answer: Mr Harris said that he was happy to note that Taplow had improved understanding of Greek language. Since Taplow readily understood the joke Harris asked him to explain it to other students of the class.

She gave a prescription to Taplow. She asked Taplow to go to the shop of a chemist to buy some medicines for Mr. Crocher.

Answer: Taplow was worried that while he was away Mr. Crocker-Harris may come to the school.

Millie said that Mr. Harris was not likely to come soon. Even if he comes, she will take all the blame.

Answer: Weather on that day was quite fine and suitable for outdoor activities. If Taplow had not come to the school he would have gone out to play golf.

Answer: Taplow had asked Cocker-Harris if he has been promoted to next class. He replied, “I have given you exactly what you deserve. No less; and certainly no more.”

So Taplow said that Harris was hardly human.

Answer: When Millie entered the school Taplow was talking to Frank about Crocker-Harris. He thought that Millie had overheard him and she might inform Harris about it. Taplow feared that Harris may downgrade him.

So he was afraid to see Millie.

Answer: Crocker Harris was a rule abiding teacher. He did not declare results to his students. This was to be declared on the last day by the headmaster of the school.

He took lot of efforts in teaching his students. If a student missed a class, he would teach him during extra hours. If a student did not study properly he would even go to his house, probably to have a discussion with parents.

Students thought that Mr. Crocker did not have feelings. He was regarded as a dry and shrivelled up person.

Students did not dare to disobey him. They did not regard him as a sadist. They respected him.

He was committed to his duties. Even on the last day of the session, he wanted to teach Taplow. Though he getting delayed puts him in bad perspective.

Thus Crocker-Harris was a rule abiding and devoted teacher.

Taplow is a young student of age about 16 years. He likes playing golf and loves outdoor life.

His communication is very clear and open. He does not mince a word but maintains dignity. He told Frank about Mr. Crocker not informing grades. He did not hesitate to say that some teachers in the school were sadists.

He readily accepted his mistakes and was open for correction. When Frank objected about his remarks, Taplow quickly accepted that he had gone a bit too far.

He respected his teachers. He talks respectfully with Frank. He defends Crocker-Harris about giving extra works. He hesitates to go to the chemist for buying medicine.

He has clears goals set for himself. He wanted to study science.

He was a gullible person. He readily believed Millie and ran to buy medicine.

Thus Taplow was a young, frank and gullible person having clear goals.

Answer: In my opinion the title of the play is very much justified.

This play in the text book is a part taken from the play ‘The Browning Version’.  This book is written by Robert Browning. This book is considered a translation of Greek Play ‘Agamemnon’.

While writing or translating the play, Robert Browning has changed characters of the original play but he has retained the same theme.

Thus it is said that the translated play is a version of the original play as seen and written by Robert Browning.

Thus the play has been titled “The Browning Version”

(i) How did poet try to find location of Hell and Heaven?

Answer: He looked into the book of Geography to find their location.

(ii) What age poet thinks he could have lost his childhood?

(iii) Which poetic device is used in third line of the extract?

Answer: Alliteration. The word ‘H’ has been repeated.

(iv) Which word in the extract is synonym of ‘stopped’?

(i) Why does poet not hold adults in good stead?

Answer: Because they do not follow what they preach.

(ii) Which quality of human beings is reflected in this extract?

(iii) Which poetic device is used in the fourth line of the extract?

Answer: Repetition. The word ‘love’ has been repeated.

(iv) Which word in the extract is synonym of ‘spoke’?

(v) Which word in the extract mean ‘taught’?

(i) What is the meaning of ‘my mind was really mine’?

Answer: Poet had started acting on his own. He stopped taking guidance from others.

(ii) What do you understand by ‘Producing thoughts that were not those of other people’?

(iii) What is the poetic device used in fifth line of the extract?

Answer: Alliteration. The letter ‘m’ has been repeated

(iv) Which word in the extract is synonym of ‘select’?

Answer: The poet looked into the books of Geography to know location of Hell and Heaven. But he could not find location through the books. So he understood that these are imaginary locations.

Answer: Poet realised that adults did not follow what they preached. Thus he understood their hypocrisy.

Answer: Now the poet could visualise the world through his own mental powers. He started generating his won thoughts and perspectives. This probably made him self-confident.

Answer: Poet regards childhood as mark of innocence. During this period child does not understand Hell and Heaven. The child is truthful and does not indulge in hypocrisy. He has open mind and tries to learn from everybody.