JOURNEY TO THE END OF THE EARTH

(i) The captain decided to turn and travel in which direction?

(a) we were wearing special boots

(b) we had superpowers

(iv) How many people walked on the ocean?

1. All wore protective cloths and glasses while walking on ocean

2. The Captain should not have taken a decision in hurry.

3. Ice was spread to the extent one could see

4. The instructions should always be clear and precise

(i) How many checkpoints author crossed to reach Antarctica?

(ii) What was the author still wondering about?

(a) beauty of ground in play

(b) beauty of balance in play

(c) importance of defence in play

(d) beauty of aggression in play

(iii) Which of the animal has not been mentioned in the extract?

(iv) Which of the following is not a worry of author?

(a) Antarctica getting warmer

(b) survival of human beings

(i) Which of the following does not carry the same meaning of ‘to get a grasp of’ as used in the extract?

(a) All students need to get a good grasp of this concept.

(b) Priya jumped but failed to get a good grasp of the rope and slipped.

(ii) Based on following statements, please select the best option –

Assertion: A visit to Antarctica helps understand part of history.

Statement: Some major events have occurred in a short span of a million years

(a) Assertion only can be inferred from the extract.

(b) The statement is not true.

(c) The statement is true and the assertion is not true.

(d) Assertion and Statement both can be inferred from the extract.

(iii) ‘evolution and extinction’ as used in the extract is similar to which of the following?

(b) birth and death

(iv) Which of the following has not been talked about in the extract? 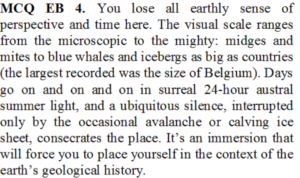 (i) Which of the following option correctly refers to the phrase ‘visual scale’?

(a) A vision correction device

(b) Things one can observe

(c) Thoughts of a visionary

(d) Dimensions of a visor

(iv) Which of the following are not the features of the place described in the extract?

(v) Which of the following word as used in the extract mean ‘adventure’? 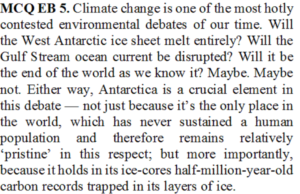 (i) According to the extract, which of the following is a strongly debated topic?

(ii) Which of the following is not a correct meaning ‘pristine’?

(iii) Based on the extract, what could be the most likely profession of the narrator?

Assertion: Antarctica is an important element in environmental debates

Statement 2: Antarctica holds carbon records in the layers of ice

(a) Assertion and Statement 1 can be inferred from the passage

(b) Assertion and Statement 2 can be inferred from the passage

(d) Assertion can be inferred from the extract and both statements are basis of this assertion.

(v) Which of the following possibility has not been indicated in the extract?

(a) Melting of entire ice sheet

(b) Disruption in Gulf Ocean Current

(c) End of the world

(d) Beginning of a new era 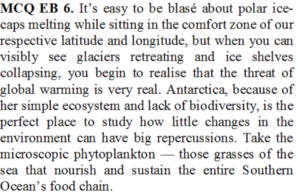 (i) What does the phrase ‘our respective latitude and longitude’ as used in the extract imply?

(ii) Which of the following sentence does not convey the meaning ‘little changes can have big repercussions.’

(a) A little neglect can breed great mischief

(b) A small leakage can sink a great ship.

(iii) According to the extract which of the following does not make one realise that the threat of global warming is very real?

(b) breaking of ice sheets

(d) All of the above

(iv) Which of the following word as used in the extract implies ‘miniature’?

(v) Which of the following option is correct with respect to two statements given below?

Statement 1: Phytoplankton is a type of grass found at Antarctica

(c) Both statements are false

(d) Both statements can be inferred

(i) For how many hours author had travelled?

(ii) Through how many modes author had travelled?

(iii) What was the first emotion after reaching Antarctica?

(iv) What was the second emotion?

(v) Why colour of landscape was white?

Answer: because of ice

(vi) Which word in the extract mean ‘continuous’?

(i) For how many years Gondwana existed?

(ii) Which phrase in the extract mean ‘became extinct’?

(iii) Which phrase in the extract mean ‘evolved’?

Answer: got under way

(iv) ‘the landmass was forced …’ .To what does the word ‘landmass’ refer to?

(i) What is being referred to as ‘a giant ping-pong ball’?

(ii) What markers of human habitation is missing at the place referred to?

(iii) What are the smallest creatures referred to?

(iv) What is the largest creature referred to?

(v) Which phrase in the extract is synonym of ‘absent’?

(vi) Whose size is as big as countries’?

(i) How many years before human beings were evolved?

(ii) Age of human beings on earth is equal to what time of geological clock?

(iii) How did we create dominance over nature?

(iv) Which word in extract is synonym of ‘very small amount’?

(v) Which word in extract is synonym of ‘uproar’?

(i) To what does ‘this debate’ refer to?

(ii) Name the continent where human beings have never lived?

(iii) How old are the carbon records at Antarctica?

(iv) Where are the carbon records hidden?

Answer: in the layers of ice

(v) Which word in the extract is synonym of ‘important’?

(ii) To whom does the phrase ‘future generation of policy-makers’ refer to?

(iii) What is most important about the ‘future generation of policy-makers’?

Answer: their willingness to act

(iv) Which word as used in the extract is antonym of ‘least’?

(i) What sustains the food chain of Southern Ocean?

(ii) How many cells phytoplankton have?

(iii) What is being referred as the most important process?

(iv) What is produced during the process of photosynthesis?

(v) Which word as used in the extract mean ‘minute?

Answer:  Author mentions about depletion of ozone layer, melting of ice and retreating of glaciers as indicators. These point out to the global warming. If global warming increases beyond certain point, survival of human kind would become difficult.

Answer:  Gondwana was a piece of land that existed around Antarctica of this day. Through this piece of land Antarctica was connected to other parts of the world. But later, it was separated into different countries as we see today.

Answer:  Scientists strongly debate if ice at Antarctica would completely melt. Would Gulf Stream Ocean currents be disturbed? What would happen to human kind in these situations? Also carbon records of millions of years are hidden in ice of Antarctica.

Hence Antarctica is a crucial element.

These could be a combination of mind-boggling activities.

Answer: Antarctica has simple ecosystem. It has lack of biodiversity. Human beings have never lived there. Thus it is a perfect place to understand how even a small change can make big impact on environment.

Answer:  The spread of ice to the extent one can see is a breath taking sight. One can readily understand about global warming. It is possible to understand the various geological events that occurred in past and about the importance of clues hidden underneath ice.

Thus the visit can be a life changing experience.

Answer: Once a landmass Gondwana existed around Antarctica. Through this Antarctica was connected to rest of the world. But later it goat separated into several countries as we see today. A study of this change can identify various geological activities of past.

A great amount of history can be understood through the carbon records hidden in the ice of Antarctica.

One can observe that glaciers are retreating. Large layers of ice sheets are getting melted. This gives us an indication of present situation of global warming.

Through these studies, one can forecast about depletion of ozone layer and global warming.

Thus study of Antarctica is very useful to us.

Answer: Antarctica has a very simple ecosystem. It lacks biodiversity. So it is relatively easier to do environmental studies.

Antarctica is the only place where human beings have not lived. Thus it is easy to understand how even a small change can cause a bigger impact on environment.

Within the sheets of ice, Antarctica holds many million years of old carbon records. These could help us understand the impact of past events on present.

The impact of global warming can be witnessed through retreating glaciers and melting of ice.

Any further reduction in ozone layer may cause adverse impact on phytoplankton. This in turn could impact lives of all animals and birds living in Antarctica.

Owing to above, Antarctica is considered a crucial element in environmental studies.