REACH FOR THE TOP 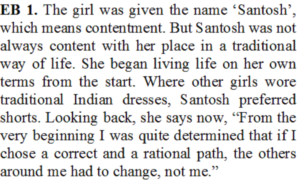 (i) Which word in the extract mean ‘contentment’?

(ii) How did Santosh begin living her life?

(iii) What did Santosh prefer to wear?

(iv) Whom did Santosh expect to change?

Answer: others around her

(v) Which word in the extract mean ‘selected’? 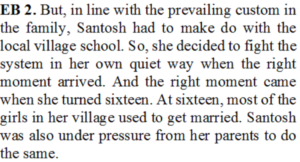 (i) Where did Santosh study?

Answer: in the local village school

(ii) Why did Santosh not oppose going to village school?

Answer: She was waiting for the right moment

(iii) At what age girls of the village used to get married?

(iv) Who pressurized Santosh to get married?

(v) Which word as used in the extract mean ‘existing’?

(i) To whom does the word ‘she’ refer to in above extract?

(ii) What did ‘her parents’ refuse?

Answer: to pay for her education

(iii) How did ‘she’ plan to pay for paying for her school fees?

(iv) Eventually who paid for ‘her’ education?

(v) Which word in the extract is antonym of ‘rudely’?

(vi) In which city ‘she’ took admission in a school?

(ii) To whom does the word ‘I’ refer to in above extract?

(iv) Which words in the extract imply giving permission?

Answer: They answered in affirmative

(v) Which word in the extract mean ‘disappearing’?

(i) When did the semester actually end?

Answer: nineteenth of May

(ii) When was ‘I’ required to reach Uttarkashi?

Answer: Twenty-first of May

(iii) Which group of words as used in the extract mean ‘directly went’?

(iv) Whose permission ‘I’ had not taken?

(v) How did ‘I’ apologize to her father?

Answer: By writing a letter

(i) In which year Santosh climbed Mount Everest?

(ii) In which year Santosh had met mountaineers at Aravalli?

(iii) What was the age of Santosh when she climbed Mount Everest?

(iv) What record Santosh set when she reached Mount Everest?

Answer: She became the youngest woman to do so

(v) Which word in the extract mean ‘reached?

(vi) Which word in the extract mean ‘highest reward?

(i) The team had people from which countries?

(a) India and Burma

(b) Indonesia, India and Nepal

(ii) This time Santosh scaled the mountain for

(a) She became the only woman to reach Mount Everest alone

(b) She became the only woman to reach Mount Everest twice

(c) She became the youngest woman to reach Mount Everest

1. Santosh scaled Mount Everest for the second time within 12 months

2. This time the team was an all-women team

3. Santosh secured a unique place in records of mountaineering

4. Santosh must have been a proud person

(i) In above extract which feeling is referred as indescribable?

(a) Unfurling the Indian flag

(b) Being on top of the world

(c) Feeling of a proud Indian

(ii) Santosh took pride in being

(iii) What did Santosh bring down from the Himalayas?

(iv) Which word as used in the extract is synonym of ‘keen?

Answer: While staying in Kasturba Hostel she came across a group of mountaineers. They used to practice at Aravalli Hills. She joined their group. Later she enrolled at Nehru Institute of Mountaineering at Uttarkashi. Thereafter she went for expedition every year and her skills improved.

Answer:  She had enrolled at Nehru Institute of Mountaineering Uttarkashi for taking training. But she had not sought permission of her father. Probably she thought that she would take permission in person during semester vacation. But she did not have sufficient time to go home. So she wrote letter of apology.

Answer: Santosh had an extraordinary resistance to cold and altitude. She possessed an iron will, physical endurance and mental toughness.  These qualities made her a successful mountaineer.

Answer:  Her seniors appreciated Santosh for her climbing skills, physical fitness and mental toughness. Her fellow colleagues appreciated her for the concern she would have for others and her desire to work together as a team.

Answer: The Indian government recognized her achievements. Santosh was bestowed country’s one of the top awards Padmashri.

Answer: No, Santosh was not content with the prevailing system of society. She revolted against it at the right moment. She had a strong urge for education. She had the desire to excel which saw her reach pinnacle of mountaineering.

Answer: While other girls wore traditional dresses, Santosh preferred to wear shorts. She opposed getting married at an early age of sixteen. She pursued her urge of getting higher education. She followed her dream of becoming a mountaineer.

She had said that if she selected a correct and rational path, then others need to change not me.

She did not follow the tradition of the village to get married around 16 years of age. She enrolled herself in a school at Delhi. She decided to do part time job when her parents refused to pay for her education. Eventually her parents paid for her education. Later she studied at Maharani College, Jaipur. She took mountaineering training at an institute at Uttarkashi.

Thus we can see that Santosh did not follow traditional ways of society. She lived her life on her own terms.

Answer: Santosh took to mountaineering after meeting a group of mountaineers at Aravalli hills in Jaipur. She took training at an institute at Uttarkashi. Then on she went to expedition every year. Thus she demonstrated a strong determination and self-motivation to excel.

She improved her climbing skills. She developed an extraordinary resistance to cold and altitude.

Her seniors used to marvel at her climbing skills, physical endurance and mental toughness. Her colleagues used to appreciate her for her concern for others and willingness to work in a team.

Hence Santosh had all the qualities of an excellent mountaineer. 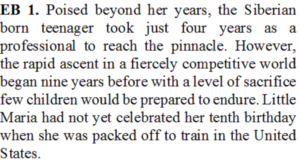 (i) Which word in the extract mean ‘quick’?

(ii) What was the age of Maria when she shifted to United States?

(iii) Why did she go to United States?

(iv) Where was Maria born?

(v) Which word in the extract mean ‘peak?

(vi) How much time Maria took to reach the pinnacle?

(i) What lesson did Maria learn at young age?

Answer: tennis excellence would come at a price

(ii) Which sport did Maria play?

(iii) Whom did Maria miss most?

(iv) Why her father could not come to meet her?

Answer: he was working more to earn money

(v) Which word as used in the extract mean ‘also’? 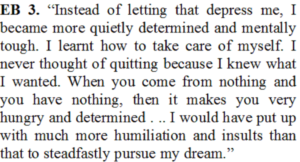 (i) To whom does the word ‘I’ refer to in above extract?

(ii) Why did the narrator not think of quitting?

Answer: because she knew what she wanted

(iii) When is one very hungry and determined?

Answer: When you come from nothing and you have nothing

(iv) The narrator was ready to tolerate

(v) Which word in the extract is synonym of ‘allowing?

(i) Maria’s accent is

(ii) Which is native country of Maria?

(iii) For which country Maria wants to play Olympics?

(iv) Which country is a big part of life of Maria?

(v) Which word in the extract is antonym of ‘humbly?

(i) Who is narrator of above extract?

(iii) What according to narrator is the most important thing?

Answer: to become number one in the world

(iv) What does the narrator describe as motivation?

(i) Which of the following is not hobby of Maria?

(iii) Her fondness to which item is at odds with her taste?

2. Maria should have different hobbies

3. Pancakes are favourite of Maria

4. All gowns of Maria could be sophisticated 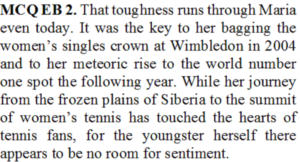 (i) What does Maria possess even today?

(ii) In which year Maria became world number one?

(iii) What does Maria not care for?

(iv) Which word as used in the extract is synonym of ‘peak?

Answer: Maria had gone to United States to get training in tennis. Her mother did not get visa to travel to US. So Maria had to stay away from her mother during training.

Answer:  She did not allow such incidents to depress her. Her mission was to reach to the top of tennis world. She did not want to get distracted by anything.

Therefore she did not react to bullying.

Answer:  She is very competitive. She works very hard at whatever she does. Doing hard work is her job. She does not get sentimental about her work. This is the mantra for her success.

Answer: In 2004 Maria won her first major title. It was the Wimbledon title. Her mental toughness was the major reason for her victory.

Answer:  She was very proud of being a Russian. She had said that her blood was still totally Russian. She wanted to represent Russia in Olympics.

Answer: Maria had a charming style and a sweet smile. But she possessed strong determination and mental toughness. She liked to wear expensive evening gowns. But she preferred to have pancakes with chocolate spread and fizzy orange drinks. She had said that money is motivation but being world number one is more important.

Answer: Maria had shifted to Florida, USA to receive training for tennis. Her father had to work in his native country to pay her expenses. So he could not often come to USA to meet her daughter.

Answer: Maria used to sleep at 8 PM. Other senior pupils used to return at 11 PM. They would wake her up. They will make Maria clean and tidy up the room.

Answer: Maria had gone to Florida, USA when she was nine years old. She received training in tennis. That training played a major role in becoming number one tennis player of the world.

Thus she considers US a big part of her life.

Answer: The first quality that Maria possessed was the clarity of purpose. She started taking training for the purpose of becoming world number one tennis player.

She was determined to continue her training. Bullying did not depress her. Loneliness and being away from her mother did not deter her efforts. She came from nothing and had nothing. This too made her more determined.

She had realised that success comes at price. So she was ready to make many sacrifices. She accepted being away from family. Her preparations had no room for sentiment.

She had said that certainly money is a motivation. Tennis is a business as well as a sport.

ON KILLING A TREE 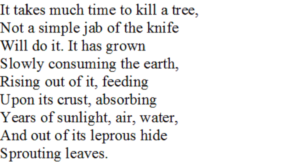 (i) Which poetic device has been used in the eighth line of the extract?

(ii) At what speed the tree grows?

(iii) Can a simple jab of knife kill a tree?

(iv) Which word of the extract mean ‘growing’?

(v) What does the tree absorb?

(vi) What word in the extract is synonymous to ‘skin’? 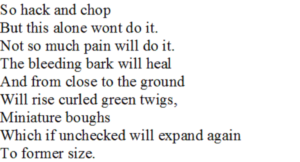 (i) Which two things alone cannot kill a tree?

(ii) Which word in the extract is antonym of ‘huge’?

(iii) Which poetic device has been used in the fourth line of the extract?

(iv) After cutting of a tree, what would rise again? 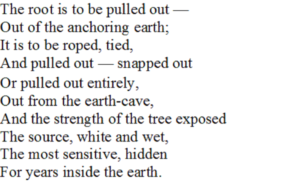 (i) What needs to be done to kill a tree?

Answer: roots needs to be pulled out

(ii) How can roots be pulled out?

Answer: the tree needs to be roped, tied and pulled to snap roots

(iii) According to extract, how does the root appear ?

(iv) Which is the most sensitive part of the tree?

(v) Which word as used in the extract is antonym of ‘hidden’ ?

Answer:  When a tree is cut, small twigs start sprouting from the point tree is cut. These are called miniature boughs.

If these are not checked, the tree again grows to its former size.

Answer:  If a tree is simply cut, it will grow again. To kill a tree it is necessary that its roots are completely uprooted. Hence it is difficult to kill a tree.

Answer:  It a tree is cut, small twigs will start growing. If these are left unchecked, tree will grow to its former size.

If tree is uprooted, it will not grow again. Poet call this situation as killing of a tree.