THE SERMON AT BENARAS

Gautama Buddha lived from 563 BC to 483 BC. He was born in a royal family of northern India so he was a prince. His name was Siddhartha Gautama. At the age of 12, he was a sent to a school to study holy books of Hindu religion. He returned from the school after four years. Then he got married to a princess.

For 10 years they lived as per tradition of royal family. They had a son.

Living in the royal family, prince Siddhartha did not have any chance to see or experience problems of the world. At the age of about twenty five, once prince had gone for hunting. He saw a sick person, an aged person, a funeral procession and a monk who was begging for alms.

These scenes affected him to such an extent that he immediately left his home. He went to the world outside his home in search of spiritual knowledge regarding the scenes of sadness he had seen.

He roamed to different places for seven years. Finally he sat under a peepal tree. He promised to himself to remain there only till he got the spiritual or the ultimate knowledge.

After seven days he understood the spiritual knowledge. He gave a new name to the peepal tree as Bodhi Tree. He started teaching and sharing his new understandings. Then he was called the Buddha (The person having knowledge)

The Buddha gave his first religious speech at the city of Benares. It is the most holy space of the river Ganges for taking a holy bath. That speech is not lost, it is saved. It is famous even today. That sermon is written in following paragraphs. This sermon explains wisdom of Buddha about a type of pain that cannot be easily understood.

Kias Gotami had only one son. Her son died. She became very sad. She carried the dead child to her neighbours. She requested them to give some medicine so that her son becomes alive. The people said that she had become mad because medicine cannot make a dead person alive.

After a long time (after meeting many people) Kisa Gotami met a person who gave a suggestion to her. The man told that he could not give medicine for her child, but he knew a doctor who could give medicine.

The girl (Kisa Gotami) requested the man to  tell the name of the doctor. The man asked her to meet Sakyamuni, the Buddha. Kisa Gotami went to Budddha. She started crying. She requested Buddha to give medicine to her son to make him alive again.

The Buddha told that he wanted some mustardseeds to treat her son. The girl (Kisa Gotami) became happy and promised to buy some mustardseed. Buddha said that mustardseeds should be brought from a house where death has not occurred in any of their relation or friends.

They requested Kisa Gotami not to remind them of their pain of losing their family members. There was no house where no one had died. Kita Gotani became very tired and hopeless. She sat on the side of a road. She watched lights of city. Lights became brighter and then got switched off again.

Finally the darkness of the night had spread everywhere. She considered destiny of mankind. Their life starts, grows and the life ends again. Now she understood that she had become selfish in her grief.

Death is common to all. Everybody will die someday. In this world of sadness, one who gives up selfishness, can live for forever in memory of people.

A ripe fruit has the danger of falling down from the tree early. Similarly, young ones are more in the danger of dying. Every pot of clay made by potter finally breaks someday or the other. Same is life of living beings. It will end someday. Every young and adult, fool and wise, all will die.

Those who die, move away from life. A father cannot save life of his son, and a relative cannot prevent death of another relative.

Please note that while relatives are watching and expressing sorrow, one by one every living being is carried away by death. It is just like an animal is carried away for killing. The complete world is affected by death and damage. Therefore wise people do not become sad because they know the nature of the world.

Nobody will obtain peace of mind by becoming sad or weeping. Instead, his pain will increase and his body will also suffer. He will make himself sick and weak but the dead person will not become alive by his sadness.

One who wants to live in peace should keep away from sadness, complaint and sorrow. One who has removed these emotions from his life will become calm and obtain peace of mind. One who has overcome sorrow will become free from sorrow and remain calm. God would always bless such person.

Nowadays Martha has difficulty in sleeping. She does not enjoy talking or playing with her friends. Husband of Martha was 26 years old. He died a month ago due to cancer.

Anya is 17 years old. She does not feel like eating. She spends her time in the room and cries there. Her grandmother had died recently

Both these persons are expressing their sorrow. Grief is a natural emotion. It comes to each one of us when we suddenly lose anything or because of sudden change.

Grief is different for every person and it is a personal emotion. But many types of behaviours occur after death of loved ones. Some of these are narrated below

This is the most common type of grief. It is not always expressed by crying. One may not cry even when he or she is sad. Sadness can be expressed by remaining silent.

Such type of emotions occur when someone is confused. He may be frustrated because he was not able to prevent death of his loved ones. One may have feeling of not able to live without his or her loved ones.

Such feeling comes when people feel that they were not kind towards the person who has died. Such feelings may also come if they feel that they could not take good care of the dead person. Or because of the feeling that the person should have consulted the doctor earlier.

This feeling comes when a person feels that now he or she will not be able to take care of himself / herself.

Such feeling comes when one feels absence of a partner. There would be reminders every day that a partner, family member or a friend is not alive. Food is not prepared the way it used to be prepared earlier. There may not be a phone call to share special moments or to exchange greetings.

This feeling comes when somebody is very tired of life.

This feeling particularly comes in cases of sudden death.

We can approach people who are sad, but please remember that everybody does not want to accept help. They may not share their grief. While some may like to talk their thought and describe events of past.

We should have lot of patience and let the person understand that you care for him / her and are ready to support.

In 1985 car of my wife slipped from a road covered by ice. She died in that accident. A psychologist from the school told us that we were not expressing our sorrow in right manner. We felt very angry. He told us the correct first stage is the acceptance that somebody is no longer alive.

In the month of August this year, my 38 year old son died while he was sleeping. Now his two year old son and his pregnant wife are alone in this world.

The sorrow can come in any form and there is no correct method of expressing sadness. The general expectation is that after a great loss, we shall gradually go through various stages. We are advised that it is wrong to become angry or to cry loudly for a long time. We should accept the loss as quickly as possible.

But I was angry and I am angry. It is really bad that parents have to conduct last rites of their child. It is bad if my wife and son are taken away forever from me because of their death. Every day is now cruel to me.

A relative of mine from Jerusalem is a psychiatrist. He gave me some relief by saying the proverb ‘we are not to ask why, but what’. It means that we should not ask why it (death) has happened, but we need to ask ourselves what we should do now. The survivors should think what they can do for each other. 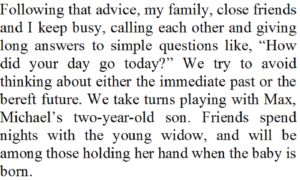 We followed the advice. All members of my family, close friends and I used to call each other. We used to give long answers to simple question like ‘How did your day go today’. The aim was to talk more amongst ourselves. This way we avoided talking about the immediate past and the uncertain future. We used to play one by one with Max, the two year old son of Michael. Many friends of the widow used to stay with her to give company. We will be among those who will support the widow when the baby is born.

The poets says to Anne that if you reject a young person he may feel disappointed and sad. But it does not mean that he truly loves you. He might have been attracted by your honey coloured hair which are falling up to your ears.

Poet wants to say that people many times are attracted by the physical beauty only. They may not give importance to inner qualities of a person.

Anne replies that she can change colour of her hair to brown, black or of carrot colour by dying. In that case she may find a person who would love her for her qualities and not for her physical beauty.

The poet says to Anne that previous night he had listened to a religious man. The man declared that he had found a text to prove that only the God can love people for their true qualities and not for physical beauty.