MY MOTHER AT SIXTY-SIX

(i) Which of the following best describes the above extract?

(ii) In reference to the extract, please select the option that is right in respect of following statements –

Assertion: Author realised that her mother had become old

Reason: Author did not want to think about the inescapable event of life

(a) Reason is correct explanation of assertion is wrong

(b) The assertion cannot be inferred

(c) Neither Reason nor Assertion can be inferred

(d) Both Reason and Assertion can be inferred

(iii) Which of the following sentence uses the same literary device as used in ‘her face ashen like that of a corpse?

(a) As soon as I alighted, I noticed a huge crowd waiting for me

(b) My handwriting is as bad as my brother

(iv) Which of the following title of a book resembles condition of mother?

(a) You Live Only Once

(b) The End of Eternity

(c) The Monk Who Sold His Ferrari

(v) Which of the following word as used in the extract mean ‘previous’? 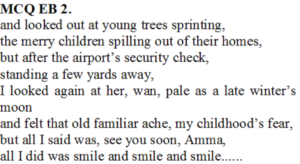 (i) The author has mentioned trees to recall the days when –

(a) She was young

(b) She was able to move as per her wish

(c) Her mother was young

(ii) Which of the following options indicate that the mother had become old?

(a) Pale as late winter’s moon

(b) Children spilling out of their homes

(d) Standing a few yards away

(iii) Which of the following might be going on in the mind of author when she said ‘see you soon, Amma’ to –

(a) overcome her own fears of separation

(b) give a ray of hope to her mother

(c) have a hope of seeing her mother again

(iv) Please choose the correct option from the following

(c) All I did was smile – alliteration, The merry children spilling – simile

(v) Which of the following word as used in the extract is antonym to ‘unknown’?

1. Identify the poem and the poet.

Answer: Poem – My Mother at Sixty-six

2. Where was the poet driving to and why?

Answer: The poet was driving to Cochin airport to catch a flight.

3. What is meaning of corpse?

Answer: A dead body. In this line it means that mother was looking very pale like a dead body.

4. What is the poetic device used in third line of the extract?

Answer: In this extract ‘I’ refers to the poet.

6. What was the realisation?

Answer: Her mother had become old and weak.

1. What does merry children symbolize ?

2. What does young trees signify?

Answer: The young trees signify youth and fast paced life. While mother looks tired, tress appear to be moving in opposite direction of car.

3. Which thought did the poet put away?

Answer: Looking at her old mother, poet thought that her mother may not live long. She puts this thought way.

4. Who looked out at the trees and children?

Answer: The poet looked out of the window of the car.

1. What was the childhood fear of the poet? Why does it return to her?

Answer: It was the fear of separation from her mother. The same fear troubled her now also because mother had become old.

2. What is the poetic device used in last line of the extract?

Answer: Repetition. The word ‘smile’ has been repeated.

3. What does the word ‘see you soon’ indicate?

Answer: These words indicate the hope that poet would be meeting her mother again. It also give comfort to her mother.

4. Which word in  the extract is synonym of ‘pain’?

5. What does the first two lines tell us about feelings of poet towards her mother?

1. Where is the poet presently ?

Answer: Poet is at the airport of Cochin.

2. To whom is ‘her’ referred to in above extract?

Answer: ‘Her’ is referred to mother of poet.

3. What qualities of ‘late winter’s moon’ are compared?

Answer: The dull pale colour of late winter’s moon is compared with colour of face of mother.

4. What is the poetic device used in last line of the extract?

Answer: Simile. The colour of moon is compared with colour of face of mother.

Answer: A child always likes to be in the company of her mother. The childhood fear of poet was about getting separated from her mother

Answer: He mother is sitting beside her and dozing with open mouth. Her face looks ashen like a corpse. Her face is dull just like a hazy moon of late winter.

Answer: The world inside the car represents old age and inactivity. Mother is old and is looking like a corpse. So the mood is of sadness and resignation.

The sprinting tress and merry children outside the car represent world of happiness, youth, hope and activity.

Thus the two worlds are different.

Answer: After security check, the poet looked at her mother. She noticed that her face was wan and pale like moon of late winter. She felt the pangs of fear of her childhood days.

The poet smiled at her mother and said ‘see you soon’.

Answer: A kid feels uncomfortable when her mother moves away from her. During childhood the poet had the fear of separation from her mother.

The poet sees that her mother has become old and weak. She thinks her mother may not live for a long time. Poet feels the fear losing her company once again.

Answer: Kamal Das looks outside the car. She sees young trees appear to be moving at a great speed. Happy children are coming out of their homes. The outside world looked happy and full of activity.

Thus poet is able to divert her attention.

Answer: Mother is old and is looking like a corpse. So the mood is of sadness and resignation. The poet wants to get rid of such thoughts.

She looks outside the window at merry children spilling out of their homes. This represents happiness, youth and activity.

So, poet looks out of the window to divert her attention.

Answer: The poet smiles to console her mother that she would be coming back soon. However, at that point of time she had to go away from her. She just could not do anything about it. In order to express her helplessness of that moment, she repeatedly uses the word ‘smile’.

Answer:  Some of these phrases used by poet are – her face ashen like that of a corpse, she was as old as she looked, pale as a late winter’s moon, my childhood’s fear.

I believe the poet has been quite effective in use of these indirect references to indicate impending separation of her mother.

Answer: The poet is going  through a mixture of feelings and emotions.

While travelling in the car, poet realises that very soon she would depart for onward journey while her mother would return to hometown. She feels the pain of her child hood – of losing company of her mother.

She sees that face of her mother has become pale. She has become old and weak. The shine on her face is gone. She is dozing with open mouth. Her face is ashen like a corpse. She realizes that her mother may not live long. Her mother needs her company. So she is filled with a feeling of belongingness. She assures her mother that she will come back soon.

The smile on the face of poet represents hope. It also represents her love towards mother. She is trying to tell her mother that she loves her so much. She tells her to lead a life full of hopes.

But behind her smile there a feeling of compulsion as well Because she has to go to the other town and be away from her mother.