Read and find out

Answer: Ausable was a fat and sloppy person. He lived in a gloomy hotel that had musty corridors. He could passably speak French and German. Though he had lived in Paris for about twenty years his accent was American. He received his message on telephone rather than from black eyed beauties.

In above aspects Ausable was different than other secret agents.

Answer: Fowler is a writer who had come to meet Ausable.

He experienced his first authentic thrill when he went to the room of Ausable. There he saw a slender person sitting in the room. The man had a pistol in his hand.

Answer: Max got into the room using a master key to open the lock. 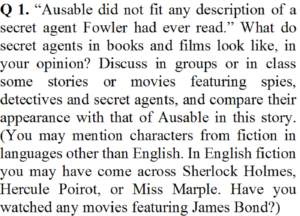 James Bond is one such famous character. Sherlock Homes is also a famous character. In Indian context, Karamchand is a character created for television. ACP Pradyuman, Daya and Abhijeet are main characters of another TV serial CID. The TV serial Saboot had a female detective KC.

James Bond is projected as a master of all trades. The other characters are closer to real life situations.

Answer: Ausable narrated that during last month somebody else had come to his room through balcony. He had complained to the hotel management but they had not taken care of it. He further tells that the balcony is not attached to his room. He goes on to build a story of his room being part of a big apartment. He makes a pledge to himself that this time he is going to take up this issue with hotel authorities very seriously.

The building up of story, reference to hotel authorities and his confidence during narration made Max believe about existence of balcony.

Answer: Ausable was surprised to see Max in his room. He quickly made a plan to get rid of Max. I think it was an instantaneous plan.

It is basically his presence of mind, ability to collate events, calmness and confidence upon himself that he could easily outsmart Max. Ausable knew that a waiter would soon be coming to the room. He knew that there was no balcony. Max had already expressed his intention to wait till receipt of the report.

Ausable stitched these aspects together. He concocted the presence of Police. Max wanted to hide during the presence of police. So he was trapped to get into balcony and his eventual death.

The famous story of ‘Thirst Crow’ is also about presence of mind. 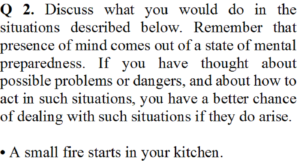 Answer: First is to check if it is from cooking gas cylinder. If yes, then a wet towel is to be put on the gas cylinder and regulator needs to be removed.

It the fire is due to any other reason then electric supply from the main point of the house is to be disconnected. After that water should be poured to douse fire.

Using these methods choke will be definitely removed.

Answer: Immediately remove the plug of that appliance. If we are not able to reach up to the plug disconnect electric supply for mains of our house.

Answer: Help him / her get on feet. Enquire about injury. If injury is minor, give first aid to the pedestrian.

If injury appears to be serious take him to a nearby hospital. We may take help of passersby in this effort.

Answer: Listen to news on TV and on internet about situation of the city. If your locality is likely to be flooded move to safer place. Otherwise it is best to remain indoors.