Taplow explains that he is still in lower fifth standard. He can take the specialized stream next year if he gets good grade in the exam. Frank asks him what grade he had got. Taplow replies that his teacher Crocker-Harris has not informed the grade. The teacher has not declared result while other teachers have announced. Frank asks why result has not been announced.

Frank says he does not follow this rule. He accepts that this is not a strict rule. So Taplow needs to wait till tomorrow to know his result. Franks asks if Taplow gets good marks, which stream he will select. Taplow replies that he would certainly select science.

Frank asks if it was a well thought opinion of Taplow about the book. Taplow clarifies that the play is not so bad – a wife murders her husband. The method of teaching is bad. Lot of Greek words are combined together. If we understand these words incorrectly, we are asked to write fifty times.

Franks say that Taplow is sounding a bit unhappy. Taplow agrees. Franks asks if Taplow has been given punishment to stay after school hours. Taplow clarifies that he is in the school to do some extra studies. Frank is surprised because it was the last day of the school.

Taplow agrees that he would have liked to play golf in this time. Because Crocker-Harris is going out of station tomorrow, he too must be busy today. But I had missed one class last week because I was sick. So I am here to learn that lesson. Weather is really good today.

Frank considers it a bad luck for Taplow to do extra work. Frank thinks that Taplow is doing extra study, so he should be certain of getting good grades tomorrow.

Taplow is not sure about it. He says that such rules apply to ordinary teachers. They will give good grades to a student for doing extra work. But this rule does not apply to Mr. Crocker-Harris. Yesterday I had directly asked him what grade he would me. Do you know what his answer was? 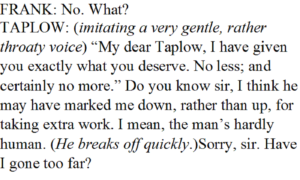 Frank asks what did the other teacher say? Taplove tries to copy the heavy voice of Mr. Crocker-Harris. Mr. Harris had informed Taplow that he had given Taplow as many marks as he deserved. He has not given more marks. He has not less marks either. Taplow thinks that Mr Harris has given him less marks. Taplow thinks that teacher is not a good human being. He suddenly stops speaking. He then says that probably he is not allowed to speak such things.

Franks says that Taplow has exceeded his limits by a large extent. Taplow request to pardon him and says that he could not control himself. Franks asks Taplow to repeat what Mr. Harris had told him.

Taplow again repeats what Mr. Harris had told him. Frank harshly says that Mr. Harris normally does not utter such words. He advises Taplow to read Aeschylus and to remain silent. Taplow is surprised.

Frank asks what time Mr. Harris was to come there. Taplow replies that he was to come at six-thirty. Frank says that Harris is already late by 10 minutes. He suggests Taplow to stop waiting for Mr. Harris and to go. He says Taplow may be able to play golf before the ground is closed.

Taplow is shocked to listen to the advice of Frank. He says that he cannot even think of avoiding Mr. Crocker-Harris. He has never done it before. Anything may happen if he does now. Perhaps he will come to my house.

Frank accepts that he is jealous of the impact Mr. Harris has on students of his class. You all are perhaps highly scared of him. Does he beat you all students.

Taplow denies that Mr. Harris ever beats his students. He does not give trouble or pain to others. Frank is surprised. He says that Taplow had talked that some other teachers trouble students. 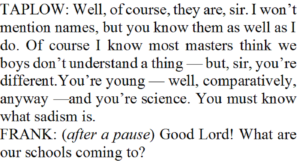 Taplow says that some other teachers are certainly sadists. I do not want to name them. You also know their names. Most teachers think that students do not understand anything. But you are different. You are relatively young. You are a teacher of science so you know what sadism is.

Frank does not speak for a while. Then he says that our school is certainly changing.

Taplow again confirms that in his opinion Mr. Crock is not a sadist. If he were a sadist, we would not be so afraid of him. We will know that he has some feelings. But he does not have any feelings. He does want that people should like him. Every other teacher wants being liked by people. 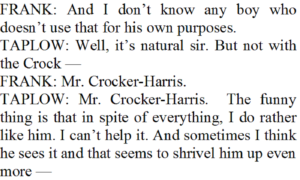 Frank says that it applied for each student also. Meaning that every student also wants beings liked. Taplow agrees. He says it is funny that he still likes Mr. Harris. He thinks that Mr. Harris also knows about it. This further reduces feelings of Mr. Harris. He becomes more dry. 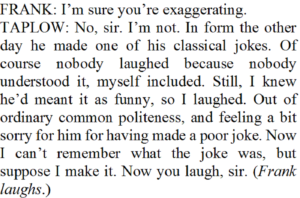 Franks says that he is sure that Taplow is making it look larger. Taplow denies it. One day Mr. Harris cracked a joke in the class. Nobody understood it. But I knew that we were supposed to laugh. I was feeling sorry about him. So I laughed. I wanted to be polite to him. Suppose I tell the same joke will you laugh? Frank starts laughing.

Taplow tries to copy the style of Mr. Crocker in a slow and heavy voice. You laughed at my joke. I am happy at the progress of your knowledge of Latin language. The class did not understand the joke but you quickly understood the joke. You should now explain to the class so that they can also become happy.

The door towards right opens. Millie Crocker-Harris enters. She is a thin woman. She is smartly dressed. More smartly than wives of school teachers would generally be dressed. She is wearing a poncho and carrying a basket. She closes the door and stands near the notice board. She is watching Frank and Taplow. After few seconds they notice her.

Franks slowly moves near the desk and tries to motivate Taplow to tell the joke. He suddenly stops speaking after noticing Millie. Frank turns back and appears to be very happy to see Millie.

Frank and Millie exchange greetings. Millie comes to side table and puts her basket on it. Taplow comes near Frank and asks if Millie could hear him.

Frank shakes his head confidently. Millie has removed her poncho. She hangs it on the stand. Frank says that she had heard their discussion. Because she had been standing there for some time. Taplow is now worried. If she tells their discussion to Mr. Crocker, he may lose his grade. Franks comes near the fireplace and says that Taplow is thinking wrong. 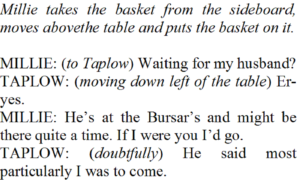 Millie shifts his basket from side table to the main table. Millie asks Taplow if he was waiting for her husband. Talpow agrees. Millie says that her husband is at the shop of Bursar and he will come after sometime. If I were in your place I would have gone home. Taplow has a doubt that his teacher would come late. He says that Mr. Crocker had asked him to come.

Millie advises Taplow to go away from there for about 15 minutes and then come back. She removes something from the basket. Taplow asks what will happen if Mr. Crocker comes there before Taplow returns.

Millie smiles and says that she will be held responsible. She takes out a prescription from her basket. She requests  Taplow to do a work for Mr. Crocker. She asked him to go to a medical shop and buy medicines. Taplow agrees and goes out from the door of right side.

The poet asks himself when I lost my childhood. Did I lose when I understood that adults are not as truthful as they appear to be? They talk about love, affection and advise others to love each other. But they themselves do not act with love. Did I lose my childhood on that day?

The poet continues to make guess about loss of childhood. During his life he had understood that adults always do not speak truth. They may advocate something but may do otherwise. This realization is very painful to him.

The poet asks himself where I lost my childhood. He thinks it is lost at some place that he has forgotten. He thinks that his childhood is lost in the innocent face of an infant. This is all he can remember.

Recently found this website and I like the format of explanation in VR solver, really helping me a lot to prepare for my school test