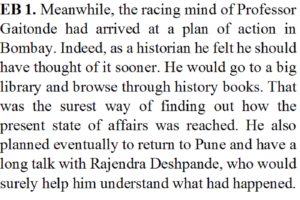 (i) What does the phrase ‘racing mind’ mean?

(a) thinking while running

(b) thinking while participating in a race

(ii) Where did Professor Gaitonde want to go in Bombay?

(iii) Where did Gaitonde finally want to travel to?

(iv) To whom did Gaitonde want to meet at Pune

(v) The phrase ‘arrived at a plan’ has been used in the extract. Which of the following is not similar to this phrase

(a) arrived at a scheme

(b) arrived at an action

(c) arrived at a station

(d) arrived at a conclusion 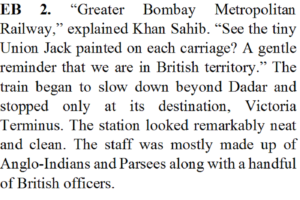 (a) a train driver

(b) a fellow passenger in the train

(c) an employee of GMBR

(ii) What is Union Jack?

(a) national flag of India

(b) national flag of United States of America

(iii) What was the last stop of the train

(iv) The expression ‘neat and clean’ has been used in the extract. Which of the following expression is not similar to it?

(a) ways and means

(b) bright and shining

(v) According to above extract, staff at Victoria Terminus did not comprise of 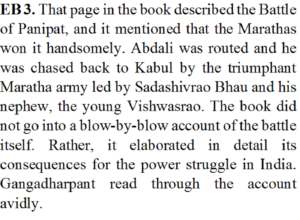 (i) Who was defeated in the Battle of Panipat?

(ii) Abdali went back to

(iii) Which of the following was not detailed in the book?

(a) description of Battle of Panipat

(d) consequences for the power struggle in India

(iv) The expression ‘blow by blow’ has been used in the extract. Which of the following expression is not similar to it?

(v) Which of the following word used in the text has dissimilar meaning? 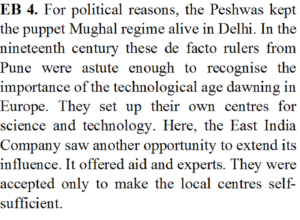 (i) Why did Peshwas kept Mughal regime alive?

(a) Mughal were very strong

(b) Mughal were puppet

(ii) Who ruled from Pune?

(iii) What provided another opportunity to East India Company to increase its influence?

(a) puppet Mughal regime at Delhi

(b) strong Maratha regime at Pune

(c) setting up of centres for science and technology

(iv) For new centres of science, offer of East India Company was accepted to

(a) to construct beautiful centres

(b) to make better use of resources

(v) Based on above classify following as facts or opinion. 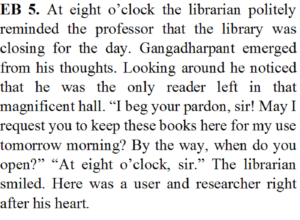 (i) What were the timings for closing and opening of library?

(a) eight o’clock and seven o’clock

(ii) How many people were present in the library when the librarian talked to Gangadharpant?

(iii) What request Gangadharpant made to the librarian?

(a) to allow an extra hour of study

(b) to give the books to others on the next day

(v) The expression ‘looking around’ has been used in the extract. Which of the following expression is incorrect in respect of word ‘around ’ 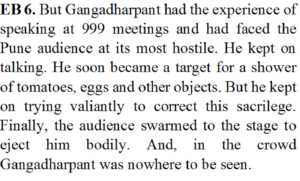 (i) Which audience were most hostile to Gangadharpant?

(a) The present audience

(ii) Which of the following things were thrown at Gangadharpant?

(iii) How much experience Gangadharpant had of speaking in a meeting?

(iv) The expression ‘kept on trying’ has been used in the extract. Which of the following expression is incorrect in respect of word ‘kept on ’

(a) kept on reading

(b) kept on running 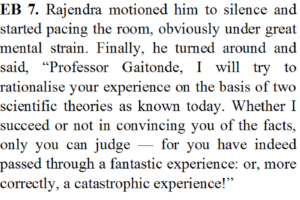 (i) Which of the following was not done by Rajendra?

(a) motioned Gaitonde to keep quiet

(b) paced in the room

(ii) What did Rajendra not try to do?

(a) explain experience of Gaitonde

(iii) Explanation of Rajendra was based on

(a) a scientific theory

(b) his own experience

(v) Which of the following can be correctly inferred from the extract?

(c) Gaitonde wanted to know more about his experience

(d) Rajndra and Gaitonde were not known to each other 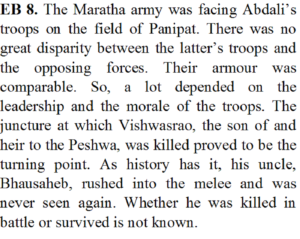 (i) Armies of Maratha and Abdali faced at Panipat to

(a) have a discussion

(b) to fight against each other

(c) to reconcile their differences

(d) to support each other

(ii) To what does the phrase ‘opposing forces’ refer to in above extract?

(a) army of Maratha

(b) force acting opposite to battle

(iii) Who among the following was fighting in the battle of Panipat?

(a) rushed into the school

(b) rushed into the shopping mall

(c) rushed into the office

(d) rushed into the road 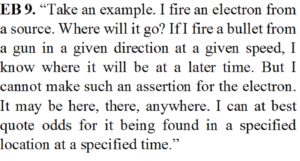 (i) What can be known about a bullet fired?

(ii) A bullet has been compared with

(iii) What can be ascertained if an electron is fired?

(c) odds of being at a location

(iv) From which chapter above extract has been taken?

(a) The Ailing Planet

(d) The Tale of Melon City

Answer: After Sarhad the train passed through suburban rail traffic. On every carriage of local train GMBR – Greater Bombay Metropolitan Railways was written. On every coach a tiny Union Jack was painted.

Thus he understood that British territory had begun.

Answer: Khan Sahib was a fellow passenger of Gangadharpant in Jijamata Express. He was travelling to Peshwar. He would take Frontier mail from Central Station. This train will travel to Delhi to Lahore and finally to Peshwar.

Answer: The station was very clean. Staff was mostly of Anglo Indian, Parsees and a few British officers.

Outside the station there was big building of East India Company. This company did not exist in India after 1857.

Answer: He did not find handloom shops on this road. Instead there were Boots and Woolworth departmental stores, large offices of Llyods, Barclays and other British banks. The road resembled a typical street in a British town.

Answer: The building in fornt of Victoria Terminus station was that of East India Company. Shops and offices on Hornby Road were other than his perception. He was perplexed.

So he wanted to go the library to solve the mystery of history.

Answer: The East India Company understood the power of Marathas. Therefore they deferred their plan of expansion in India. They confined their activities to cities of Bombay, Calcutta and Madras. They helped Marathas to establish centres of science and technology.

Answer: India started moving towards democracy. Peshwas had lost their enterprises and were replaced by democratically elected bodies. The kingdom at Delhi survived as a rubber stamp.

Answer: India of his era was not subjected to slavery of British. The country was in the position to stand on its own feet and command self-respect. It had confined activities of British to Bombay only.

Answer: While putting his notes into the pocket, he had unintentionally taken some pages of a book with him. All but one were lost in Azad Maidan.

He showed that sole paper to Rajendra Deshpande as an important evidence towards history.

Answer: At Azad Maidan, a platform had been constructed in a pandal. A chair and a table were put on that platform. Nobody was sitting on the chair though a lecture was in progress Professor Gaitonde sat on the chair. Audience objected and threw tomatoes, eggs and other objects at him. Finally he was bodily ejected out of the platform.

Answer: Rajendra explained that reality is that we experience through our senses or indirectly via measuring instruments.

Rajendra said that even after applying all the known laws, behavior of atoms cannot be fully explained.

Similarly one may experience different aspects of reality though one at a time.

Answer: When Marathas established centre of technology and science, they took limited help from East India Company. According to Professor Gaitonde this gave an opportunity to the company to increase their influence.

Answer: According to Rajendra when Professor collided with a truck he was probably thinking of some war and the catastrophic theory.

owing to  interaction of these two aspects , thoughts of professor got transitioned to another world.

Answer: Their victory in the Battle of Panipat increased influence of Bhausaheb and Vishwasrao.. It established supremacy of Marathas in northern India. Marathas combined their political acumen with valour and expanded their influence all over India.

The East India Company deferred their plan of expansion. The Company was reduced to pockets of influence near Bombay,

For political reasons, the Peshwas kept the Mughal kingdom alive in Delhi. But the Mughal emperor was merely a puppet and a rubber stamp.

In the nineteenth century Marathas understood the importance of the technology. They set up their own centres for science and technology. East India Company offered its help and experts. Marathas accepted this to make the local centres self-sufficient.

The twentieth century brought about further changes towards a democracy. By then, the Peshwas were gradually replaced by democratically elected bodies.

Answer: At the library Gangadharpant asked for five volumes of books of history, Soon he was able to converge to page where history had changed.

It was mentioned that during the battle Vishwasrao guided his horse to the melee where the elite troops were fighting. He attacked them. And God was merciful. A shot brushed past his ear. Even the difference of a til (sesame) would have led to his death.

That page further mentioned that the Marathas won it handsomely. Abdali was defeated and he was chased back to Kabul. The Maratha army was led by Sadashivrao Bhau and his nephew, the young Vishwasrao.

Their victory in the battle was a  great morale booster to the Marathas. It also established their supremacy in northern India.