(i) What is very much beyond the narrator?

Answer: Doing things which others can easily do

(ii) How many times the narrator got into trouble at cinema?

(iii) Where would narrator reach instead of a lavatory?

Answer: in an alley

(iv) Which word as used in the extract mean ‘regularly?

(v) Which phrase as used in the extract mean ‘searching’?

(vi) What type of door did the author encounter?

(i) Why was author pulling the zip of the bag?

Answer: because it was jammed

(ii) How long the author kept pulling the zip?

Answer: for some minutes

(iii) Did the zip of the bag finally open?

(iv) Which phrase in the extract mean ‘jerked it’?

Answer: yanked at it

(v) Which group of words tells us that the author continued to apply lot of force to open the zip?

Answer: I pulled harder and harder

(vi) Which word in the extract mean ‘suddenly’?

(i) What was fluttering?

(ii) Which word as used in extract is synonym of ‘emptying’?

(iii) What made several types of noise?

(iv) What came out of lidless tin?

(v) Name the thing that jumped on the floor?

(vi) Which word as used in extract is synonym of ‘not able to speak’?

(i) When would author have disasters?

(ii) Why did the author lean?

(iii) Which phrase in the extract mean ‘slid his seat back?

Answer: threw his seat back

(iv) How did author free himself?

Answer: my clawing the leg of the man sitting next to him

(v) Who was sitting beside the author?

(i) Who was sitting beside the narrator?

(ii) What got spilled into the lap of the lady?

(iii) Who cleaned up the spillage?

(v) By what mode the narrator was travelling?

(vi) Which word in the extract mean ‘immediately’?

(vii) Did author know how the incident occurred?

(viii) How many times the drink was dropped?

(i) How long did the narrator talk to ‘her’?

(ii) Which word in the extract mean ‘several’?

(iii) Which word in the extract mean ‘went’?

(iv) The chin of the author had become of which colour?

(v) For how many days teeth and gums were likely to remain of navy blue colour?

(vi) Which phrase in the extract mean ‘humorous talks’? 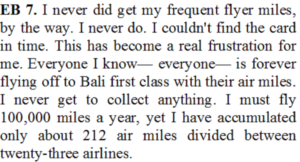 (i) Why the narrator could not get his air mile?

Answer: he could not get the card in time

(ii) In how many airlines the author had flown?

(iii) How do most people utilize their air miles?

Answer: To go to Bali

(iv) Which word in the extract mean ‘collected’?

(v) How many air miles author had collected?

(a) When I am the owner of myself

(c) When I own everything

(d) When I am sitting on an owned seat

(ii) Which of the following activity is done by author?

(b) Putting pen near mouth

(a) Unexpected movement of hands

(iv) Which phrase in the extract is synonym of ‘to reduce’?

(b) flying out unexpectedly

1. Author must have enjoyed travelling alone

3. Author had a habit of fiddling with shoelaces

4. Sitting quietly helped him save some money

(i) Which part of the bag flew open?

(ii) Size of the spillage area has been compared with –

(iii) Which of the following items did not come out of the bag?

(iv) Which of the following word has been used as a verb in the extract?

Answer:  The author tried to open the zip of his bag. He had to apply lot of force. Suddenly the side of the bag opened and contents of bag like papers, magazines, English money, coins and films got scattered on a large are. The lid of the tobacco tin came off. Its contents were spread on floor.

Answer:  Once, while travelling on a plane, the author spilled the soft drink on the lady sitting next to him. The flight attendant cleaned up the spillage. She gave another drink to the author. But this too got spilled on the lady. The lady was annoyed. She spoke indecently to the author.

Answer:  Once while travelling on an aeroplane, he bent forward to tie his shoelace. At that moment the passenger ahead of him, reclined his seat. So he was caught in a ‘crash position’. He managed to prevent his fall by holding the leg of the person sitting next to him.

Answer: In an aeroplane he was writing something on his notebook. While thinking about the household items, he had taken tip of the pen in his mouth. The ink of the pen leaked. Thus his chin, mouth and tongue became navy blue.  These stains remained for several days.

Yes, the author considers this as his worst experience.

Answer: She would advise their kids to open the lids of food for the author. When author started his meal, she would inform children that father was cutting meet.

Answer:  Author would forget to carry his frequent flyer card.  Sometimes he forgets to ask for the air miles while checking-in. On other occasions the check-in clerk would say that author was not entitled for air miles.

Answer:  Author feels that the ‘most outstanding thing’ he is not good at is living in the real world. Therefore he is not able to do simple and routine things of daily life. While other people do so without any difficulty.

Answer: Bill recollected that recently he had joined the frequent flyer programme of British Airways. He also recalled that he had put the card in his bag. He was carrying his bag around his neck.

Answer:  Author would have to buy tobacco in England. He was worried because price of tobacco had recently increased.

He noticed that he had a cut in his finger. Blood was coming out of the wound in large quantity. Thus his attention was diverted from tobacco.

Answer:  He would not eat, drink, tie shoelaces or take pen in his mouth. He would sit quietly in his seat. Sometimes he would sit on his hands.  This prevented any untoward incident during travel.

Answer: ‘Laughing at yourself’ means recognizing your weaknesses, accepting the way you respond. When you know your limitations, comments from others do not bother you.

In the very first paragraph of the lesson, the author accepts that he is not able to do things which others can do without difficulty.

By mistake the author drops cold drink twice on his co-passenger. Remarks from the lady does not trouble him.

His teeth, chin, gums become navy blue. He describes his ‘suave ways’ and his failure to accumulating air miles.

The incident at Logon Airport is quite funny. He does not get upset because of comments from his wife.

Thus the saying is justified.

Answer: Bill used to travel a lot. Every time he travelled, there was an incident which happened accidentally rather than by intention. Therefore he has called himself an accidental tourist.

Once, while travelling on a plane, the author spilled the soft drink on the lady sitting next to him. The flight attendant cleaned up the spillage. She gave another drink to the author. But this too got spilled on the lady. The lady was annoyed. She spoke indecently to the author.

On another occasion, he was writing something on his notebook. While thinking about the household works, he had taken tip of the pen in his mouth. The ink of the pen leaked. Thus his chin, mouth, gums and tongue became navy blue.  These stains remained for several days.