(i) Which of the following does not represent the number twelve used in the extract?

(b) months in a year

(c) hours in an analogue watch

(d) numbers in a dozen

(ii) Based on the extract, please select the correct option –

(a) Statement 1 can be inferred from the extract

(b) Statement 2 can be inferred from the extract

(iii) In the extract, which of the following actions has not been requested by the poet?

(iv) ‘let’s not speak in any language’. Which of the following can be a possible explanation for this request of the poet?

(a) It is difficult to understand every language

(b) Language creates differences among people

(c) Language is a poor means of communication

(d) It is good for health if we do not speak

(a) Start a discussion with readers of the poem

(b) Greet readers of the poem

(c) Give a lecture to readers of the poem

(d) Request readers to be part of the poem

(i) Which of the following can be inferred from the extract?

(a) Statement 1 is true and Statement 2 it its reason

(b) Statement 2 is true and Statement 1 it its reason

(d) Both statements are true

(ii) Which of the following has not been used by the poet to describe the unusual situations?

(a) While harming whale

(b) While being in cold water

(iv) Which of the following option would you use to fill in the blank of following sentence? The poet _______ being together

(b) is neutral for

(v) Which of the following word has been used in the extract as an antonym of ‘welfare’?

(i) Which of the following has not been indicted as type of war?

(ii) What does ‘victory with no survivor’ imply?

(a) None can survive a victory

(b) Destruction of human values

(iii) Which of the following is equivalent to ‘put on’ as used in the extract?

(v) Which of the following has not been advocated by the poet?

(a) Accepting a new meaning to life

(b) Living with a feeling of togetherness 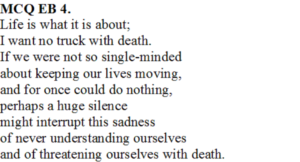 (i) ‘I want no truck with death.’ In this sentence the word ‘truck’ is used to imply –

(ii) Based on the following statements please choose the correct option.

Statement 1: We cause threat to our life

Statement 2: We are focused to keep our lives moving

(a) Statement 1 is the cause and Statement 2 is effect

(b) Both statements represent desirable effects

(d) Statement 2 is the cause and Statement 1 is effect

(iii) According to the extract which of the following does not prevail in the present situation of the world?

2. Sadness prevails in the world

3. We have good understanding of each other

4. We keep the life moving

5. Our life is safe and secured

(iv) Which word as used in the extract is closest to ‘halt’?

(v) Which of the following option has incorrect combination?

(b) Life is what it is about – repetition

(c) I want no truck with death – alliteration

(d) All the above are correct

(i) To what does the word ‘later’ refers to in the above extract?

(ii) The theme of the extract is –

(iii) ‘Now I’ll count up to twelve and you keep quiet and I will go.’ Which of the following would justify departure of the poet?

(a) Poet does not want to witness the disobedience

(b) Poet has an appointment to go elsewhere

(iv) Which of the following word as used in the extract is antonym of ‘alive’?

1. Name the poem and the poet.

2. What will happen when nobody speaks in any language?

Answer: No one will be using any bad words. Difference of opinion will not occur. Everybody would be speaking through one’s heart. So brotherhood will prevail in the world.

3. Why poet wants people to keep still and quiet?

Answer: When people are still and silent, they will be away from daily running and hurry. They will have time to introspect. They will be able to enjoy the exotic beauty of the world.

4. What two activities  poet wants us to stop?

Answer: Poet wants us to stop being in hurry and to stop speak different languages.

Poet also wants us to stop harming people and environment.

1. What is meaning of phrase ‘green wars’?

2. What kinds of wars are mentioned in above extract.?

Wars with gases – Wars against emission of polluting gases

3. What kind of victory poet is talking about?

Answer: It will be victory but nobody will survive. So there will be nobody to celebrate the victory.

4. What poetic device is used in the second line of the extract?

Answer: Repetition. The word ‘war’ has been repeated.

5. What poetic device is used in the fourth line of the extract?

Answer: Alliteration. The letter ‘c’ is repeated in ‘clean cloths’.

Answer: They should not indulge in any kind of war like green wars, war with fire and war among countries.

They should put on clean clothes and foster brotherhood.

Answer: The word ‘we’ is referred to complete human population.

2. What ‘sadness’ does the poet refer to?

3. The poet wants us to do nothing. Why?

Answer: In our daily life we are running around a lot in great hurry. The poet want s us to slow down a bit so that we can introspect.

4. What is the poetic device used in fourth line of the extract?

Answer: Alliteration. The letter ‘s’ is repeated in words ‘silence’ and ‘sadness’

1. What is the lesson we can learn from Earth?

Answer: Even after cutting of trees and crop, new plants, crop and flowers grow on earth. Similarly though some damage had occurred to mankind, a new beginning can be made.

2. What is alive when everything seems dead?

Answer: The zeal to make new beginning is still alive.

3. What is the poetic device used in the extract?

Answer: Metaphor. Earth is compared with the zeal to remain alive.

4. Which word in the extract is antonym of ‘alive’?

Answer: We shall remain calm if we keep still. This will give us time to introspect ourselves. We shall be away from daily running and hurry. Human beings will stop destruction of environment. There will be peace alround.

Answer: In this world many languages are spoken. The differences over language results into wars. Within the same language people sometimes speak bad language.

Poet urges us to not to indulge in such things. He says that let us speak through our hearts so that brotherhood prevails in the world.

Answer: The poet requests fishermen not to harm whales living in cold water sea. He requests to take from nature only to the extent needed by human kind. They should not kill anyone for the sake of pleasure.

Answer: Green war against the greenery and forests. Gas war represents emission of polluting gases in atmosphere. Wars of fire against global warming. He also talks about soldiers fighting for their nation that causes loss of life.

Answer: ‘Total inactivity’ means there will not be any work or movement. This would require that we suspend all activities.

‘Stillness” means remaining calm. We should avoid running and hurry of every day. We should take from nature only to the extent required. We should have time for introspection and brotherhood should prevail.

Answer: We are constantly in pursuit of worldly pleasure and comforts. Only motive is to keep our life moving. Poet wants us to slow down and have some time for introspection. We should respect our surroundings, fellow beings and other living beings.

Answer: Stillness does not mean total inactivity. It means slowing down a bit and remaining calm. Poet gives example of earth. After one type of crop is cut we can sow another crop. As the season changes, different kinds of flowers and plants bloom. All this is done silently and with calmness.

Answer: Throughout the poem, poet has talked about the virtue of remaining calm. He has also explained that being calm would result into protection of environment. It will increase brotherhood among human kind. It will give us time for introspection.

Hence the title of the poem is justified.

Answer: We all should become silent for some time. We shall not be speaking anything bad about anyone. We shall not be using force to hurt our fellow being. That moment will be of peace and silence. Poet has termed this as an exotic moment.

Answer: Everybody is in a hurry in pursuit of his selfish desires. A ‘huge silence’ will slow down our activities a bit. This will give us time to introspect ourselves. There will be brotherhood among human beings. So man will become happy.

Answer: Keeping quiet stresses that we should take from nature only to the extent needed. Thus fishermen will stop hunting for whales in cold sea. This will save fish and other sea creatures from being extinct. It will foster ecological balance.

Answer: The poet wants human beings to lead a life of slow pace. We should have time to introspect. Brotherhood should prevail throughout We should protect environment and our fellow beings. Lastly, we should remember that whatever be the present conditions, we can make a new beginning.

Answer:  The ever increasing desire for comfort has harmed environment and caused spread of several diseases. Wars within family, community and among nations has caused huge damage to mankind.

Thus the message of the poem to remain calm, extend brotherhood and protect environment is relevant to the world of this era.

Answer:  It is so easy to dissipate any news or thought throughout the world in fraction of a minute. These could be through text, audio or a video message. We all are aware that a bad news spreads faster than a good news.

Thus it has become difficult to inculcate good belief system in the society.

Answer: The poet visualizes a world that does not have the language of dissent. People do not use their power to suppress or harm others. They care for each other and feel attached to each other.

People are conscious of environment. They conserve it. Pollution is greatly reduced. Humanity has understood that harming environment is same as harming themselves.

People do not hanker after materialistic gains. They take from nature to the extent needed thus the development is self-sustainable.

Our fast paced life and selfish attitude for comfort has made our life sad. Poet wants us to alter our life style to take us from sadness to happiness.

Poet wants us to believe that it is possible to change our ways. As new saplings can be planted on a barren piece of land, we too can adopt new ways of living.

Answer:  My first priority would be to teach values that would not harm others. I would propagate the theme of non-violence.  Poet has referred to this as ‘walk about with their brothers’. Recent wars within society and among countries have brought misery to human beings.

My second priority would be to protect environment. By reducing ‘green wars, wars with gas and wars with fire’ we can start compensating for the loss that we have already inflicted. Just a bit more awareness and some scientific application can make it happen.

My third priority would be not to take from nature more than we need. Poet has referred to this as ‘not so single minded about keeping our life moving’. We should rather try to return more to the nature. Situation like deforestation, extinction of certain flora and fauna, extinction of some living species can be avoided. This will restore the natural ecological system of our planet.

Thus we can contribute to keep our planet and ourselves healthy.