(i) The king has been described as

(ii) Which of the following was the purpose of arch

(b) span the major thoroughfare

(d) to improve beauty of the city

(iii) Based on the extract, please classify following between fact and opinion

(i) In the first line of extract what is referred by the word ‘thing’?

(ii) What did the king loose?

(iii) Which of the following is mentioned as reason of crown falling?

(a) the arch was too low

(b) the crown hit the arch 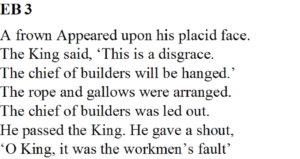 (i) ‘A frown Appeared upon his placid face.’ means that the king was

(ii) How did chief of builder escape from getting hanged?

(a) by shouting at the king

(b) by fighting the soldiers

(d) by running away from the kingdom

(iii) An expression ‘This is a disgrace.’ has been used in the extract. Which of the following is not the correct replica of a similar expression?

(c) This is a humiliation

(d) This is an insult

(iv) What is the poetic device used in the sixth line of the extract? 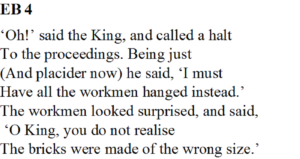 (i) Why did the king stop the proceedings?

(a) he did not want to hang anybody

(b) he did not want to hang any wrong person

(c) he did not want to make any one happy

(d) he did not believe in hanging

(ii) What was his new order?

(a) to hang the chief builder

(b) to hang workmen

(c) to hang the bricks

(d) to not to hang anybody

(iii) To whom did the workmen blame? 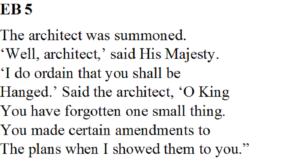 (i) To whom does the phrase ‘His Majesty’ refer to?

(ii) Who had made amendments in the plan?

(iii) Who had shown the plans to the king?

(iv) What does the word ‘amendments’ mean in the above extract?

(v) The fifth and the sixth lines of the extract start with the same word ‘you’. This poetic device is known as

(i) Based on the extract please classify following as activity and emotions.

(ii) Why did king need a counsel?

(a) He was confused

(b) He was not able to decide

(c) He wanted to take advice

(iii) Whom did the King wanted to meet?

(a) A tricky person

(b) The wisest man in the country

(c) The most stupid person 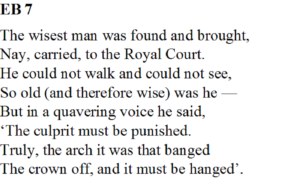 (i) Which of the following has not be narrated about the old man?

(ii) To whom did the wise man advise to hang?

(iii) An expression ‘The culprit must be punished.’ has been used in the extract. Which of the following is not the correct use of ‘must be’?

(a) The brave must be respected

(b) The honest must be appreciated.

(c) The thief must be freed

(d) The innocent must be protected

(iv) Why was the old person considered wise?

(a) He was the quickest

(b) He was the oldest

(c) He was the youngest

(d) He was the strongest

(i) To whom does the word ‘we’ refer to in the above extract?

(ii) What would have if someone was not hanged?

(a) The people would have become happy

(b) The people would have become sad

(c) The people would have revolted against the king

(d) The ministers would have lost their job

(iii) The last two lines being with the same letters. What is the poetic device used?

(iv) Based on the extract please classify following as fact and opinion. 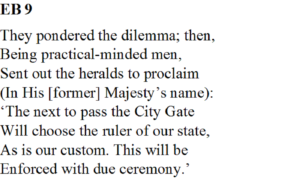 (i) Who is the author of the poem through which above extract has been taken?

(ii) By whose name the order to find the new ruler was issued?

(b) The living king

(iii) Who would choose the new ruler?

(a) The next person to become ministers

(b) The next person to enter the city

(c) The next person to go out of the city

(d) The next person to enforce the ceremony

(iv) The ministers did not conduct which of the following activity

(a) Pondered over the dilemma

(b) Sent out heralds

(c) Decided to throne the new king as per ceremony

(d) Declared themselves to be practical minded persons

Answer: The king was riding to see the newly constructed arch. Height of the arch was low. It touched his crown and the crown fell down. Then the King said ‘ this is a disgrace’.

He ordered to hang the chief of builders.

Answer: The architect passed on the blame to the King saying that the King had made changes in the design. Now the King was in trouble.

To overcome this tricky situation, he ordered to call the wisest person for consultation.

Answer: The old wise man advised to hang the arch.

He said the culprit must be hanged. It was the arch that had thrown down the crown. Hence it should be hanged.

Answer: The ministers objected to hanging of the arch.

Answer: According to custom the first person to reach the City Gate would select the new king.

The ministers allowed hanging of King. They said “Long live the King” after his death. They allowed a fool to select new King and crowned melon as the new king.

Thus ministers did not act as wise people.

Answer: The people of the city wanted to live in peace to enjoy their freedom. They did not have any other concern about their own life.

Thus it did not bother them when a melon became new king.

Answer: In my opinion the old wise person was the most stupid person. Though he was regarded as wise person he advised a non-living thing like arch to be hanged.

Answer: The principle of laissez faire means unwillingness to involve in matters of others or influence activities of other. It also means to accept whatever is happening.

The people were not bothered about what was happening to the king or the kingdom. Thus the principle was established.

Answer: In this poem melon represents the foolish people, their foolish behaviour and aloofness of general public.

The king got an arch constructed. While passing under the arch his crown falls down. He wants to punish the person responsible for building a low height arch.

Several people shift blame to others. King accepts every argument which represents foolishness of the king. Finally the blame is transferred to the King.

To resolve the tricky situation a wise person is selected on the basis of age who orders the arch to be hanged. Ministers raised objections and a noose was set up. One whose height was suitable to the noose was to be hanged. Finally the king was hanged

A foolish person was allowed to select new king . He selected a melon. And melon was crowned the new king.

Thus the poem is full of instances of foolishness. Hence the title is justified.