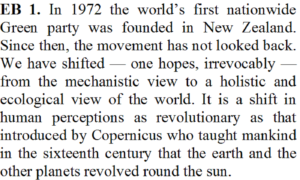 (i) In which country the Green revolution was first started at a national level?

(ii) What does the author mean by ‘..has not looked back.’

(a) has not seen the previous station

(b) has progressed further

(c) has always looked on the front

(d) has not looked side ways

(iii) Who is author of the chapter from which above extract has been taken?

(iv) Which word in the extract has been used to mean ‘changed ’?

(i) When was the concept of sustainable development popularized?

(ii) Condition of earth has been compared with

(iii) According to the extract, which of the following we have not begun to relaise

(a) our ethical obligations

(b) good stewards of the planet

(iv) The expression ‘declining health’ has been used in the extract. Which of the following expression is incorrect in respect of word ‘declining’ 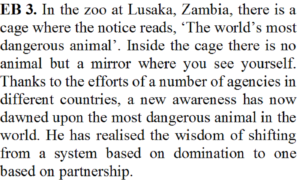 (i) According to extract, who is the most dangerous animal in the world?

(ii) What special thing has been kept in a cage of a zoo situated in Lusaka?

(iii) Human beings have realised the wisdom of shifting to

(a) system of domination

(b) system of revenge

(iv) The expression ‘number of agencies’ has been used in the extract. Which of the following expression is incorrect in respect of word ‘number of’

(a) number of offices

(b) number of people 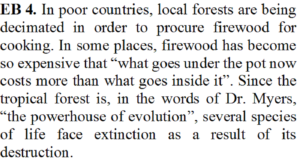 (i) Why forests are being destroyed in poor countries?

(a) to obtain cooking

(b) to obtain firewood

(c) to obtain some money

(ii) Which of the following correctly explains the meaning of “what goes under the pot now costs more than what goes inside it”.

(a) cost of pot has reduced

(b) cost of food has increased

(c) cost of wood has decreased

(d) cost of wood is more than cost of food

(iii) According to above extract, what is considered as ‘powerhouse of evolution’

(b) cost of firewood has increased

(c) forests are being decimated

(d) cost of food had increased

(a) in order to decrease

(b) in order to cook

(c) in order to travel

(d) in order to music 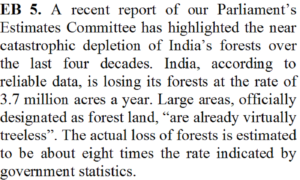 (ii) What is the rate of decrease of forests in India

(iii) What is the condition of ‘large areas, officially designated as forest land’

(iv) Actual rate of depletion is how many times more than that declared? 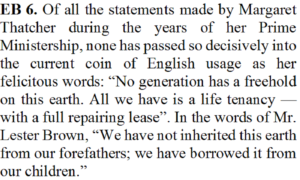 (i) Margret Thatcher was Prime Minister of which county.

(a) no generation has a freehold on this earth

(b) we have borrowed it from our children.

(c) all we have is a life tenancy

(d) All of the above

(iii) Which of the following refers to previous generation

(iv) The expression ‘of all the statements’ has been used in the extract. Which of the following expression is incorrect in respect of word ‘of all the ’

(a) of all the students

(b) of all the people

(c) of all the teachers 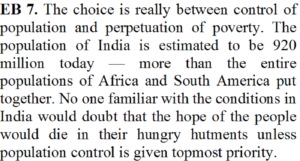 (i) According to extract what is the present population of India

(ii) We need to make choice between

(iii) Population of Africa and South America is

(iv) What should be topmost priority for India

(a) control of population

(b) control of epidemic 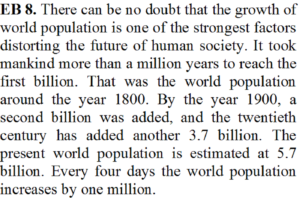 (i) World population to reach one billion, took more than

(a) one million years

(b) one billion years

(ii) In how many years world population increased by another billion.

(iii) Presently what is the time taken to increase population by one million?

(iv) Which is one of the strongest factors to restrict future of human beings?

(a) growth of world population

(b) number of years taken to increase population

(v) Name the chapter from which the above extract has been taken.

(b) The Ailing Planet

(c) Making of a Scientist

Answer: The author has referred to the Green Movement. It was started in 1972. It has gripped imagination and attention of entire human race completely and quickly.

Answer: Perception of human beings has shifted from mechanistic view to a holistic and ecological view about the world. This is a revolutionary shift because the earth is being regarded as a living being of which we are a part.

Answer: Sustainable development is defined as the development that not would only meet requirement of the present generation but also ensure that the needs of future generations are not comprised.

Answer: According to official data forests in India are declining at the rate of 3.7 million acres per year. However many areas designated as forests are treeless. Actual rate of depletion is estimated to be about eight times the official rate.

Answer: Rate of increase in population has been growing. More people are being added at rapid pace. Between year 1800 and 1900 population increased by 1 billion. During 20th century this increase was 3.7 billion.

Answer: The principal biological system of our planet provide virtually all material for most industries. Any reduction in consumption of these material will help protect ecological balance.

A reduction in pollutants generated in industry will help improve water, soil and air quality.

Answer: Mrs. Margret Thatcher had said that we have a life tenancy on earth with full repairing lease. She had implied that it is our responsibility to return to Mother Nature whatever we take from it. We must conserve the environment and ecological balance.

Answer: Natural resources and principal components of ecology have been over exploited by human beings. Such act has put environment and ecology under great stress. The reduction in vital aspects of earth has been equated to declining health of a patient.

Hence the phrase ‘The Ailing Planet’ has been used.

Answer: Owing to continuous exploitation of forest, availability of firewood has decreased. Hence cost of firewood used for cooking has been rising.

Authors fears that at this rate, cost of firewood may become more than the cost of food.

Answer: It is our moral duty to be a good caretaker of earth. We must act as a trustee to the earth. We should hand over the planet to next generation in a better condition.

Answer: The green movement has gripped imagination of human being  completely and quickly.

We have shifted from mechanistic view to a holistic and ecological view of the world. This shift in our perception is as revolutionary as the discovery of Copernicus. He had discovered that planet and satellites moved around the Sun.

Human beings have now become conscious to the thought that the Earth itself is a living organism and we are merely a part of it. The earth has its own metabolic needs and we need to ensure its availability.

Human being have realised importance of forests and the four principals of ecological balance. There are now efforts to protect and conserve these aspect though these may not be sufficient.

Human being have realsied the ill effect population explosion can have on environment. More people will mean greater requirement of consumption of natural resources.

Thus the perception of human beings has taken a turn for the good.

Answer: It has been said that forests precede mankind and deserts follow. It signifies that forest is important for development and sustenance of mankind.

Forests keep environment cool. It brings rain to the earth. It is home to millions of species that maintain ecological balance.

Tropical forests are now eroding at a rate of forty to fifty million acres per year. The cost of firewood has been increasing disproportionately. It is feared that cost of fire wood could soon be more than the coast of food itself. The growing use of dung for burning has deprived soil of natural fertilizer. This also a cause of decrease in vegetation on earth.

Decrease in forest cover has already caused global warming. Many species have become extinct and many more are on the verge of extinction. Soil erosion has become quite common.

Thus over exploitation of forest is very harmful to human being.

Answer: The earth had come into existence much before human beings had evolved. First of all vegetation developed – on the ground and in the water. Forest cover grew thicker and thicker. Gradually several micro-organism and species developed. It was much later that the human being evolved on earth. So forests preceded mankind.

Thus man got forest as inheritance from Mother Nature. Initially his needs were limited. The natural cycle of earth compensated more than the man took from it. Gradually needs of mankind grew exponentially. Large areas of forest were cut for farming and fire wood. Other natural resources too were exploited for his comfort and pleasure.

Thus the statement is justified in the context and content.

Answer: The title of the lesson is very much justified.

Population explosion has put lot of pressure on natural resources. More people does not mean more workers but it means more number of people without work. It is feared that soon the cost of firewood may be more than the cost of food itself.

Thus the ecological balance of the Earth is in a critical condition. So the title of the lesson is justified.