THE BOND OF LOVE 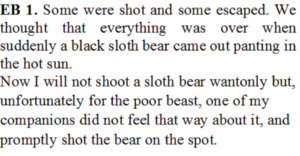 (i) To whom does the word ‘some’ refer to in above extract?

(ii) Who came out suddenly?

(iii) Who did not want to shoot the bear?

Answer: One of the companions of the narrator

(v) Which word in the extract mean ‘kill’?

(vi) Which word in the extract mean ‘intentionally’?

(i) Why was the little creature making noise?

Answer: Because its mother had died.

(ii) To whom did the author want to catch?

(iii) Where did the little creature run into?

Answer: It ran into sugarcane fields.

(iv) What two things the little creature did after being caught?

Answer: It tried to bite and scratch author

(v) Which word as used in the extract mean ‘catch?

(i) How many dogs the narrator had? What was their breed?

(ii) With whom did the bear develop attachment?

(iii) How was ‘he’ left during his younger days?

(iv) Where did the bear usually run into?

(v) What was the favourite place for the bear to sleep?

Answer: Beds of the narrator and his family

(vi) Please write the one word used in the extract for ‘a person who live in a rented house’?

(i) Who is referred as ‘he’ in above extract?

(ii) What is the extent of paralysis mentioned in the extract?

Answer: Bruno could not stand on his legs

(iii) Who called the narrator?

(v) Which word in the extract mean ‘pet? 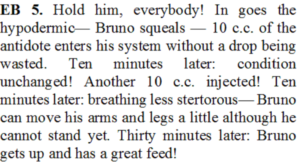 (i) How many injections were given to Bruno?

(ii) What quantity of medicine was injected each time?

(iii) In how much time from first injection did Bruno get up?

(iv) What did Bruno do after getting up?

(v) Which word in the extract is antonym of ‘utilised’?

(i) What was the advice of narrator and his son?

Answer: To send Baba to Zoo at Mysore

(ii) Why did narrator want to send Baba to Zoo?

Answer: Baba had become too big to be kept at home

(iii) To whom was the letter written to?

Answer: Curator of the Zoo.

(iv) Who took more time to accept the advice?

(v) Which word in the extract mean ‘agreed?

(vi) Why was author in a hurry to write to curator of the Zoo?

Answer: He thought his wife may change her mind

(i) Who thought that Baba would not recognize author’s wife?

Answer: The narrator and his friends

Answer: At some yards from the cage

(iii) Who ran up to meet Baba?

(iv) How did Baba stand to express his happiness?

Answer: He stood on his head

(v) What did howling of Baba communicate?

Answer: He was happy to see author’s wife

(vi) Which word in the extract is synonymous of ‘happiness’? 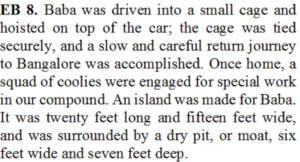 (i) From which place the journey had started?

(ii) Why was the cage tied?

Answer: So that it does not fall off from roof of car

(iii) What was made in the compound?

(iv) What was the width of the island?

(v) What was the depth of the moat?

(vi) Which word in the extract mean ‘group’?

(ii) Which of the following was not given to Baba?

(iii) Which of the following did not cry?

1. My wife stayed in the Zoo for about three hours

2. It is necessary to control one’s emotions

3. I knew what was going to happen next

4. Curator should be a soft hearted person 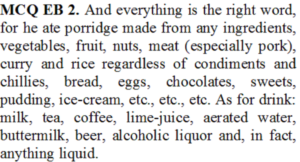 (i) In above extract who is referred as ‘he’?

(ii) Which of the following items, ‘he’ did not eat?

(iii) Which of the following items ‘he’ did not drink?

(iv) Which word as used in the extract is synonym of ‘component’?

Answer: In a sugarcane field a mother bear was shot dead by the companion of author. The baby bear got off the back of his mother and started running away. The author ran after him, caught him and brought him to his house.

Answer: Author had kept Barium Carbonate in his library to kill rats and mice. Bruno ate it. He got paralyzed. He also suffered from vomiting, heavy breathing, heaving flanks and gaping mouth.

Answer:  Author had taken out about one gallon engine oil from his car. He wanted to use it against termites. Bruno drank the complete quantity. This did not affect him in any way.

Answer: He was given an antidote of 10 cc medicine through an injection. After 10 minutes he was given equal dose of same medicine. Ten minutes after the second dose his breathing started improving. After 30 minutes Bruno was completely cured.

Answer: Gradually Bruno developed good bonding with everybody at author’s home. But Bruno had a special bonding with author’s wife. She too loved Bruno. She changed her name to Baba to signify her affection.

Answer: When prompted to ‘wrestle’ or ‘box’ he would tackle and tumble anyone who came forward. When asked to hold the gun, he would point a stick towards you. When asked about a baby, he would affectionately cradle a stick.

Answer: Bruno had grown too big.  Tenant’s children were small. So Bruno had to be kept chained for most of the time. People feared that he may cause harm to children.

Answer: Bruno had been sent to zoo at Mysore. Letters from zoo and the visit of friends reported that Bruno was sad. Author’s wife was also sad to be away from Bruno. She wanted to meet Bruno. Therefore author took his wife to zoo at Mysore.

Answer: Author’s wife requested curator to allow her to take Bruno back to her house. The curator suggested that this permission could be granted only by his boss. The designation of his boss was superintendent.

Answer: In the compound, an island fifteen feet wide and twenty feet long was created for Bruno. It was surrounded by a six feet wide and seven feet deep moat. A wooden box was brought and kept on the island.

Then baba was released on the island.

Answer: While she was still at some distance from the cage, Bruno recognized her. He started howling in happiness. Author’s wife ran up to him. She patted Bruno through bars of cage. Bruno was so happy that he stood on his head.

For next three hours author’s wife did not move away from the cage. She gave Bruno ice-cream, lemonade, tea, cakes and many other things.

We had to leave the zoo at the closing time.  My wife and Bruno cried bitterly. Even the curators and keepers of zoo were sad.

My wife requested the curator if Bruno could be returned to us. The curator replied that superintendent of the zoo could give such permission. We left the zoo to meet the superintendent.

Answer: The author had put Barium Carbonate in his library to kill rats and mice. Bruno entered into the library and ate some of the poison.

Immediately he started suffering from paralysis. He could not stand on his feet. Somehow he dragged himself to my wife. She called the author.

The narrator put Bruno into the car and rushed to a doctor. The doctor referred his book of medicine and found antidote. At an interval of 10 minutes, he injected two equal doses of 10 cc to Bruno. Within next ten minutes breathing of Bruno started getting stable. He was alright in next thirty minutes. Bruno ate lot of food after getting well.

Answer: The superintendent had advised the curator to lend a cage to the narrator to safely transport Bruno. Bruno was put in that cage. It was hoisted on the top of the car. The cage was securely tied with the help of ropes. The narrator drove his car slowly and carefully to reach his home at Bangalore.

(i) From what the snake is trying to escape?

Answer: From a stick

(ii) What are the two attributes of his body?

(iii) How is the snake trying to run away?

Answer: With curving movements of his body

(iv) How has poet described movements of snake?

(v) Which poetic device is used in the fifth line of the extract?

(i) Who lay along the sand?

Answer: Till somebody observed it

(iii) What did it do when observed?

Answer: It ran in ripples and hid among green slim reeds

(iv) Which word as used in the extract mean ‘disappears?

(ii) Does poet want that snake should be hit?

Answer: No. the poet wished that the snake escaped without getting hurt.

(iii) How harmful is the snake to children?

(iv) What is the colour of the snake?

(v) Which word in the extract is synonym of ‘floats’?

Answer: Somebody is trying to hit the snake with a stick. It is running away to escape from getting killed.

Answer:  The snake is small and its colour is green. On the basis of these two reasons the poet says that the snake is harmless.

Answer: The snake was laying in the sand. The snake runs for its life. First it runs on the sand. Then it floats on water. Finally it hides itself behind the green reeds.

Answer: Some people are chasing the snake to kill it. The snake is running to save its life. The poet through above referred words requests people to allow the snake to run away.

Answer: In this condition, the poet has described the snake as beautiful and graceful.  Poet wants to say that movements of snake is pleasing to watch.