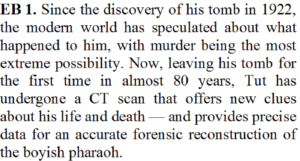 (i) Who is author of the chapter from which above extract has been taken?

(ii) Which of the following word used in above extract has a different meaning?

(iii) Why CT scan was being done on Tut’s mummy?

(a) to know about his health

(b) to know about his life and death

(c) to know about his wealth

(d) to know about his lineage

(iv) In which year the CT was had been done?

(v) Prior to the CT scan mentioned in the extract, how many times Tut had undergone CT scan?

(vii) According to the extract, what was the most unlikely cause of untimely death of Tut

(i) Which part of the mummy was first put into the CT scanner?

(ii) Which word as used in the extract mean ‘to investigate’?

(iii) The tomb was constructed in

(iv) To whom is ‘young ruler’ being referred to in the above extract?

(d) the operator of CT scanner 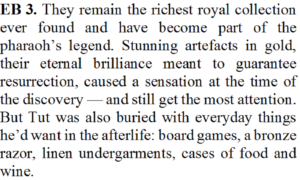 (a) friends of Tut

(c) things found in the tomb

(iii) Which word in the extract mean ‘everlasting’?

(a) richest ever royal collection

(v)Which of the following word in the extract indicate that Tut belonged to a ruler family? 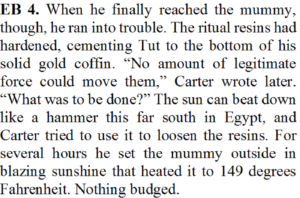 (i) What trouble Carter faced when he reached the mummy?

(a) the coffin could not be opened

(b) body of Tut was stuck with bottom of coffin

(c) he could not apply force

(d) he could not see mummy

(ii) In which country the exercise narrated in the extract was being carried out?

(iii) Why did Carter place the mummy in the sun?

(a) he wanted to disinfect it

(b) he hoped that the resin would melt

(c) he hoped that the Sun will bless him

(d) it was very dark in the tomb

(iv) What was the material of construction of coffin of Tut?

(v) To what temperature the coffin got heated after placing in the Sun?

(vi) Which of the following cannot be inferred by the phrase ‘Nothing budged’? 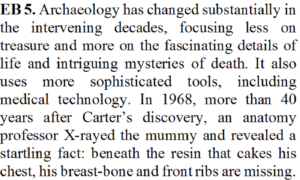 (i) Archaeology of these days focuses less on

(a) fascinating details of life

(b) intriguing mysteries of death

(ii) Carter’s discover was made in the year

(iii) Who had X-rayed mummy of Tut

(v) Which word in the passage mean ‘to a great extent’ 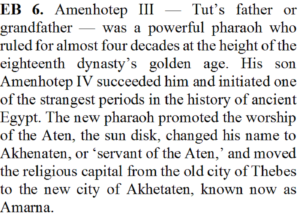 (i) Who ruled over Egypt for about 40 years?

(ii) Whose reign is called the golden age?

(iii) Whose rule is termed as the strangest period in the history of ancient Egypt?

(iv) Which of the following was not initiated by Amenhotep IV?

(a) promoted worship of Aten

(b) changed his name to Akhenaten

(v) What is the present name of the city Thebes? 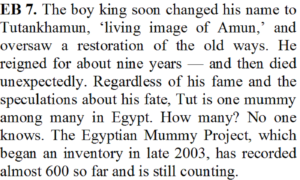 (i) Why the phrase ‘boy king’ has been used for Tut?

(a) he awarded every boy of his kingdom

(b) he was very young when he became king

(c) boys of his kingdom liked him

(d) all of the above

(ii) For how many years Tut ruled

(a) less than nine years

(b) more than nine years

(iii) How many mummies are there in Egypt?

(c) no one knows exact number

(v) Which of the following was not done by Tut

(a) he changed his name to Tutankhamun

(b) he restored old ways

(c) he ruled for far more than nine years

(d) all of the above 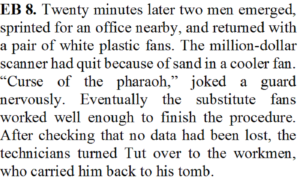 (i) Why mummy of Tut was taken out of the tomb?

(a) to place it at a better place

(b) to disinfect it

(ii) Which word in the extract is synonym of ‘stopped’?

(iii) Which procedure is being referred to in ‘well enough to finish the procedure’?

(iv) Which part of the scanner had stopped working?

(v) Who made a nervous joke about curse of pharaoh?

(i) What was removed from the coffin?

(ii) Within what time mummy was placed back in the coffin?

(iii) Which machine had been mounted in the trailer?

(iv) How were images of scanning being viewed?

(b) on a computer

(v) Which word in the extract is synonym of ‘rotated’?

Answer: On this day the mummy of Tut was brought out of the coffin for CT scan. It was the first mummy in the world to undergo CT scan.

Answer: Death or misfortune would fall upon whosoever disturbed the Pharaoh from his sleep.

The visitors to tomb used to wonder if the curse was true.

Cooler of the CT scan machine stopped functioning at the time of scanning. One of the guards had remarked that it it could be because of curse of Pharaoh.

Answer: Carter was a British archeologist. He had discovered tomb of Tut in 1922. He could not separate the mummy from its coffin. So he cut the mummy in many parts to remove gold from the mummy. Thus he damaged the mummy.

Answer: He could not separate mummy from coffin because resin had become hard.

He placed coffin in Sun but resin did not melt. Then he got resin chiseled away to remove mummy from the coffin. He cut several joints of the mummy to remove gold ornaments.

Answer: People of Egypt believed in life after death. They thought that it was possible to take things with them even after death. Since Pharaoh were very wealthy, many valuable thing made of gold were also placed in their tomb.

Answer: Tut’s mummy was covered with a shroud. Over the shroud garlands of willow, olive leaves, wild celery, lotus petals and cornflowers were placed. Some of these things start growing in March.

It was thus inferred that Tut died in March or April.

Answer: Cooler fans of the machine had stopped working because sand had entered into it. White plastic fans were brought and deployed at the machine. With substitute fans the machine could be started.

Answer: Tut was the last ruler of a powerful dynasty that had ruled Egypt. He ruled for about nine years. His mummy was discover by Howard Carter in 1922.

Answer: Emperors of Egypt were known as Pharaoh. They were buried in ‘valley of the Kings’. Thus far about 600 mummies have been discovered. Efforts to discover more are continuing.

Answer: Howard Carter was a British Archaeologist. He was the first to discover a mummy in 1922. In order to remove mummy from the coffin, he got the hard resin chiseled away. To remove gold ornaments from mummy he had cut almost every joint of mummy. Later he reassembled it in a wooden box.

Answer: Tut passed away unexpectedly after a brief rule of about nine years. His death caused an end to a long dynasty of Egypt. The cause of his death and events that occurred after his death are not known.

Thus his death is considered a major event.

Answer: Carter dealt with mummy in unscientific ways. He got the hard resin Chiseled away to separate body from coffin. He cut almost every joint of the mummy to remove gold ornaments. In this severe damage to the mummy was caused.

Therefore his method his criticized by historians.

Answer: Amenhotep III was Tut’s father or grandfather. He represented the eighteenth dynasty of the country. He was powerful pharaoh. He ruled for almost four decades. His period is considered the golden age of the dynasty.

Amenhotep IV was the next ruler. His rule is considered as the strangest period in the history of Egypt. He promoted worship of Aten. He changed his name to Akhenaten, or ‘servant of the Aten’. He smashed images and temples of another god Amun. He shifted his capital from the old city of Thebes to the new city of Akhetaten, known now as Amarna. He was termed as a little wacky by Ray Johnson.

After Akhenaten’s death Smenkhkare became king for very brief period. Nothing much is known about him.

Then a young boy became the king. He is known as Tut.

Answer: Tut was the last ruler of a powerful dynasty of Egypt that had ruled for many centuries. He became king at a very young age and died within nine years.

His mummy was found by Howard Carter in 1922. In 1968 a professor of Anatomy X-rayed the mummy. It was discovered that chest bone and front rib cage were missing. It was a startling discovery.

After 2003, CT scan of the mummy was carried out from head to toe. More than 1700 images were taken and a virtual body was created on the screen of a computer. Clear images of skull, neck vertebrae and rib cage appeared.

When did Tut die, cause of his death and events that occurred after his death are still unknown to historians. Thus mystery still surrounds about Tut.

Answer: By “Laburnum top” is meant the part of the tree where nest for the baby birds is made.

Answer: The chicks are not making any sound. Hence the tree is said to be silent.

3. How yellow colour of leaves might have helped baby birds?

Answer: Colour of baby birds of goldfinch is yellow. Yellow leaves of the tree is helping them to hide themselves.

4. What is the poetic device used in second line of the extract? 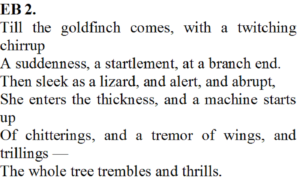 1. With whom movements of bird is compared?

Answer: Movement of goldfinch is compared with a lizard.

Answer: She does not want other animal to know about the nest for the safety of its chick. So she enters slowly.

3. What is meaning of last line of the extract?

Answer: The whole tree has become alive because of noise produced by chicks of goldfinch.

4. What is the poetic device is used in second line of the extract?

5. What is the poetic device used in third line of the extract?

Answer: Simile. Movements of goldfinch have been compared with that of a lizard.

6. Who is referred as ‘machine’ in above extract?

Answer: Chicks of the bird are referred as machine in the extract.

1. What has been termed as engine of her family?

Answer: Her chicks have been called as engine of her family.

2. Where does the bird fly to?

Answer: She flew away from the tree into the sky.

3. What happens to the tree after bird flies away?

4. What is the poetic device used in first line of the extract?

Answer: Metaphor. Her chicks have been compared with engine.

5. To whom does the bird show her identity mask?

Answer: The identity mask helps her chicks recognize their mother.

Answer: Initially there was silence on the tree. Everything was still. But when chicks saw their mother, they became happy and started making sounds of happiness. Thus the tree became full of thrill.

Answer: Her chick are very small. They cannot fly. She does not want any other animal or bird to know about presence of her chicks in the tree. Her concern is for safety of her chicks. So she is cautious.

Answer: The goldfinch first landed at the end of a branch. She carefully moved towards her nest in abrupt movements. On her return, she came to the end of another branch and then flew away.

Answer: After departure of the goldfinch the chick had stopped speaking. Voice of bird was also not heard. There was no tremor of wings or trillings. There was silence on the tree. This silence has been termed as ‘tree subsides to empty’.