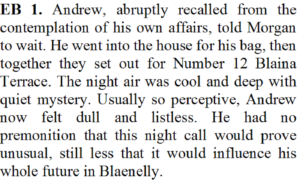 (i) Why did Andrew told Morgan to wait?

(a) he was worried about his own affairs

(b) he wanted to establish his superiority

(c) he wanted to collect his bags

(ii) How is the night air described?

(iii) Where did Morgan live?

(iii) Which of the following describes emotion of Andrew while he was walking with Morgan?

(iv) Based on the extract, please classify following in facts and opinion 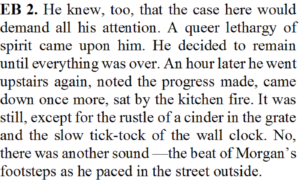 (i) The above extract has been taken from which of the following chapter?

(ii) To whom does the word ‘he’ refer to in above extract?

(iii) Which of the following sound was not audible to Andrew?

(a) tick-tock of the wall clock

(b) rustle of cinder

(d) heartbeats of the old woman

(iv) Where was Andrew not sitting?

(a) in the kitchen 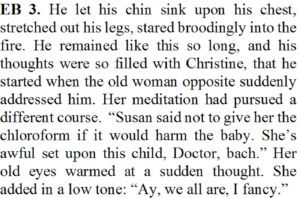 (i) What was the posture Andrew took for relaxing?

(b) sink his chin into his chest

(b) stretched out his legs

(c) stared broodingly into the fire

(ii) About whom Andrew had been thinking?

(iii) Who wanted to avoid chloroform?

(a) Friend of Andrew

(b) Wife of Morgan

(c) daughter in law of the old woman

(v) Who among the following did not live in the house Andrew was sitting? 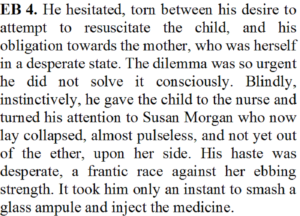 (i) Whom did Andrew decide to save first?

(ii) How did Andrew solve his dilemma?

(iii) What was the condition of Susan?

(c) not yet out of ether

(v) An expression ‘a frantic race against her ebbing strength’ has been used in the extract. Which of the following does not represent correct use of ‘a frantic race’

(a) a frantic race against Covid

(b) a frantic race against time to complete the curriculum

(c) a frantic race against time to reach destination within time

(d) a frantic race to eat fruits to become stronger 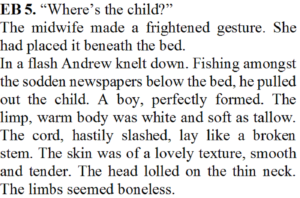 (i) Why had the midwife placed child below the bed?

(a) child’s bed was below the bed

(b) child was born dead

(c) there no other place to keep the child

(ii) Which of the following activities Andrew had to do to get the child?

(b) searched amongst newspapers

(c) pulled out the child

(iii) Which of the following has not been described about the child?

(a) his body was soft

(b) his skin was rough

(d) his body was warm

(iv) Based on the extract, please classify following as fact and opinion. 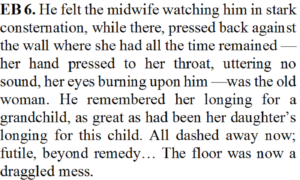 (i) What was the midwife doing?

(a) she was watching Andrew

(b) she was sleeping

(c) she was looking out

(d) her eyes were closed

(ii) Which of the following has not been described about the old woman?

(a) her hand was pressed to her throat

(b) she was sitting near her daughter

(c) she was silent

(d) she was intently looking at Andrew

(iii) The longings of the old woman were now

(d) one of the above 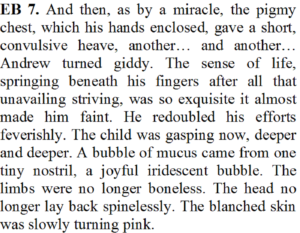 (i) Which of the following word used in the extract has a meaning similar to ‘pigmy’?

(ii) Why did Andrew redouble his efforts?

(a) there was little hope for the life of child

(b) some signs of life started emerging in the child

(c) the child was not responding to his treatment

(d) the child was still a still mass

(iii) Which of the following indicated that the child was coming to life?

(iv)What was the change in the colour of skin?

(a) from blue to pink

(b) from pale to pink

(c) from black to pink

(d) from green to pink

(v) An expression ‘The limbs were no longer boneless’ has been used in the extract. Which of the following is not the correct use of phrase ‘no longer’

(a) I no longer laughed

(c) I was no longer working

Answer: Joe and his wife were expecting their first child. Condition of his wife Susan had deteriorated that night. So Joe had come to take Andrew to his house for treatment of his wife.

Answer: Susan’s mother had realised that birth of child will take some more time. She feared that Andrew may not stay so long. Hence she offered him tea.

Andrew assured her that he will not go away before birth of the child.

Answer: Andrew heard rustle of cinder on the grate and slow tick-tock of the wall clock. He also heard footsteps of Joe who was pacing back and forth in the street. Other than these , everything was still.

Answer: Andrew had been thinking about the failed marriage of some people living at Cardiff station. He also thought of Christine.

The old woman was thinking about her daughter. She informed Andrew that Susan wanted to avoid chloroform because it might harm the baby.

Answer: The child was stillborn, At the same time condition of Susan had also become critical. He could pay attention to any of the two. This was his dilemma.

He decided to first pay attention to Susan.

Answer: Soon after birth of child Susan became almost without pulse. Andrew took out an ampule. He filled medicine in a hypodermic syringe and injected Susan. He worked feverishly for about fifteen minutes on Susan. She was brought out of danger.

Answer: The child was stillborn. It appeared soft, white and boneless. The skin was smooth and tender. His head lolled on his neck. His colour was yellow. Andrew realized that the child was suffering from asphyxia pallid.

Answer: At the Cardiff station, that evening he had come to know about many marriages that had failed. It was very difficult for him to understand such failures.

He and his girl friend Christine did not go well that evening.

Hence he was dull and listless.

Answer: Joe and Susan were married since twenty years. They were expecting their first baby. Condition of Susan had deteriorated that evening.

Mother of Susan was also worried about her daughter and her yet to be born grandchild.

Thus the Morgan family was tense.

Answer: The midwife did not conduct herself true to her profession. She pushed the stillborn child below the bed. She did not help Andrew while he was trying to resuscitate the child. Though she was happy when Andrew was successful.

Answer: Andrew filled two basins with water – one with cold water and the other with hot water. He placed the child alternately in each basin. He rubbed the chest of child with a rough towel , crushed and released the chest many times.

Through these methods life of child was revived.

Answer: On that day Andrew had gone to the house of Joe Morgan to help his wife deliver a child.

After a long wait the child was born. But it was a stillborn child. Condition of Susan also deteriorated. She had become almost pulse less. Andrew first focused her attention to Susan. He gave her an injection and made feverish efforts to make her pulse stable. She soon became stable.

Andrew filled two basins with water – one with hot water and the other with cold water. He put the child alternately in each basin. He rubbed chest of the child with a rough towel , crushed and released the chest many times. Heartbeat of child was finally revived.

Neither the old man nor the midwife believed what had occurred. They both were happy. Andrew was content because he could keep his promise to Joe and the old lady.

Certainly it was the most satisfying work by Andrew.

Answer: The story starts with Joe Morgan who had come to take Dr. Andrew to his home. Joe and Susan were married for 20 years and they were expecting a child.

After a long wait, Susan gives birth to a still born child. Condition of Susan deteriorates. She became almost pulse less. Andrew first focused her attention to Susan. He gave her an injection and stabilized her condition.

Then Andrew filled two basins with water – one with hot water and other with cold water. He put the child alternately in each basin. He rubbed chest of the child , crushed and released the chest many times. Heartbeat of child was finally revived.

The story makes reader feel that birth of a child is rebirth of the mother as well.

Andrew had the most satisfying work of his life. So we can say it was a birth of his confidence.

Hence the title of the text is justified.

An alternate title of the text can be ‘God helps those who help themselves’.