I told them I would do packing. I am proud of my ability to do packing. I feel my knowledge about packing is more than  that of any other person who is alive. It is a surprise for me to know there are so many other similar thing as well. Author wants to say that he is better than anybody else in many things.

I explained my ability to George and Harris. I suggested that they should leave the task of packing fully to me. They immediately accepted my suggestion. This was quite strange. George sat on the easy chair – spread himself. Harris raised his legs to put his legs on the table. Author wants to say that now he was left alone to do the packing.

But this was not my desire. Certainly I wanted that I should supervise the job giving instructions. George and Harris should obey my instructions and do the work accordingly. From time to time I wanted to show them how to do a particular activity. I wanted to motivate them by appreciating their work. I wanted to encourage them and teach them.

But the way they understood me, annoyed me. It irritates me a lot when I am doing work and others around me are doing nothing.

Those days I used to share my accommodation with another person. I used to get annoyed by his actions. He used to relax on sofa continuously for many hours. He would watch me while I would be doing work. He accepted that he liked to watch me work. But I am not that kind of a person.

I cannot sit idle. I cannot merely watch a person who is working hard. I would like to get up and supervise his work. I would walk around the work area with my hands in my pocket. I will advise him what to do so that work is done nicely. I cannot avoid it. This is my nature. I think I am full of energy.

But this time I did not say anything to George and Harris. I had not anticipated that the work would take so much time. It took more time than I had guessed. Finally I completed packing of bag. I sat on the bag and closed it.

Harris asked me if I would not be putting the boots in the bag. I realised that I had forgotten to pack these in the bag. This is the nature of Harris. He did not say anything earlier. He reminded me only after I had closed the bag. George laughed. His laughter irritated me. I thought he had gone mad. Such acts make me very angry indeed.

Whenever I am travelling, toothbrush gives me repeated troubles. My travelling is full of trouble because of it. In my dreams I see that I have not packed my toothbrush. I get extremely worried and wake up from my sleep. I get out of bed and start searching for the toothbrush.

Please believe me that I had to find out almost everything that exist in this world. Author wants to say that he had misplaced almost everything sometime or the other. I searched for those things in a way people used to search in ancient times. During those days unsystematic ways prevailed. Author wants to say that he is very haphazard in searching things.

I found toothbrushes of Harris and of George. I found them eighteen time. But I could not find my own toothbrush. I started putting things once again into the bad – one by one.  Before putting back I was shaking each item. Through this method I found my tooth brush in a boot. I repacked everything once again.

When I had completed packing, George asked me if I had put the soap  in the bag. I replied that I did not care at all about the soap. I shut the bag with a loud voice and locked it. After that I recollected that I had packed my spectacles in the bag. I had to open the bag once again.

The bag was finally closed at 10:05 PM. But three baskets were yet to be packed. Harris suggested that we should leave after about 12 hours. Harris thought that he and George should do the balance packing. I agreed for this. I sat down. They started their work.

George and Harris started doing packing of those three baskets. They were doing it casually. They wanted to demonstrate to me how to do packing. I did not say anything. I merely waited.

Author feels that Harris is the worst packer in this world. George is even worse than Harris. There were stacks of crockery and eatable to be packed. I felt very soon the situation would be very interesting. Author anticipated that they could soon get into trouble.

They did get into trouble. Frist they broke a cup. They broke it to show that they were capable to break crockery. This was their method of drawing attention towards them.

After that incident, Harris put the strawberry jam on top of a tomato. The tomato became flat. They had to remove the flat tomato using a spoon.

This time George got into the trouble. He stepped on butter. I did not speak anything. I came closer to them and sat on the edge on the table. I continued to observe their work. They became annoyed. If I had said anything, they would have been less annoyed. I could feel that.

Because I was sitting at the table, they became nervous and irritated. Many times they stepped on things. Sometimes they put some items behind them. They could not find those when they needed. They put pastries at the bottom and put heavy things on it. So pastries were spoilt.

They spread salt all over the place. What happened to butter is a story. I do not think they had ever handled butter in their life. Probably they had handled only small quantity of butter.

George had removed butter from his slippers. The tired to put it into a kettle. All the butter did not go in. And what had gone in did not come out. They tried to remove it layer by layer. They were putting these layers on a chair. Harris sat on the chair. Butter stuck on him. They were searching for butter everywhere in the room.

George said that he was sure he had put butter on the chair. He was looking at the chair which did not have anything now. Harris agreed with George. They started moving around the room. They were searching for butter. They met at the centre of the room. They looked at each other.

George said that it was the most unusual thing to happen. Harris agreed. He was puzzled. Then George went around and saw back of Harris.

George noticed butter at the back of Harris. Now he knew where the butter had been. Harris turned around and asked where the butter was. George shouted and ordered Harris not to move. He removed the butter. They placed it in the teapot.

Then Montmorency entered the room. It was his habit to obstruct any work that was being done. He would be cursed for his poor habit.

Montmorency would usually come to places where he was not required. He was a perfect reason for getting annoyed. People will get angry. They used to throw things at him to hit him. When such things happened, Montmorency thought he has utilized his days.

If somebody tripped over him and cursed him, Montmorency thought he had achieved his aim. Whenever he succeeds in doing so, he becomes proud of himself. His pride increases.

Montmorency put his legs into jam. Then he disturbed all the teaspoons. He thought lemons were rats. So he put his mouth into the lemon basket, bit into three lemons. Harris hit him with a frying pan.

Harris said that I was encouraging Montmorency to do such nuisance. I did not encourage him. Actually a dog like Montmorency does need any encouragement. He had a natural tendency within him to create problems.

Packing was completed at 12:50 in the night. Harris sat on the big basket. He said he hoped nothing was broken in the basket. George said that if anything was to be broken, it has broken now. The thought of something breaking gave him some pleasure.

We had only two beds. So we tossed for beds. Harris and I would sleep on the same bed. Harris asked me if I used blankets or covers while sleeping. I said I do use covers. Harris found it strange.

Harris and I had a small argument about time. Finally we agreed to take mean of two times. We asked George to wake us up at 06:30.

George did not give any answer. So we went closer to him. We found that he had already slept. So we place a pot full of water near his bed. When he gets up, he will trip because of it. Then we went to sleep.

[an extract from Three Men in a Boat]

THE DUCK AND THE KANGAROO

A duck was surprised to see how easily a kangaroo could jump. It narrates its surprise. How easily kangaroo could jump over the field as well as over water bodies. It seemed to duck that kangaroo never stops jumping. Duck says that it is bored to always be within the unpleasant pond. And I cannot go out of this pond. The duck has a wish to jump like a kangaroo.

The duck requested the kangaroo to give it a ride on his back. The duck promised to kangaroo that throughout the day it will not make any movement while sitting on its back. It will only quack to let kangaroo know that it is with him. The Duck requested kangaroo to take her to Dee islands. The duck also wants to go to an imaginary place Jelly Bo Lee. We will fly over the land and fly over the seas. Please give me a ride.

Kangaroo replied to the duck that he would need to think about the request. If I accept your request, probably it will bring good luck to me.  But I do have objections or concerns. I will tell these to you if you allow me to be speak without any hesitation. First point is that your feet are ugly, cold and wet. If you sit on me with wet feet, my body may develop lot of pain.

Duck informs the kangaroo that she has thought about his objections. She came out of the pond and sat on a rock to find a solution. I have purchased four pairs of socks. These are made of woollen cloths. These fit nicely to my feet. So my feet will not cause any harm to you. I have purchased a long coat. I will wear this while I sit on your back. Every day I will smoke a cigar. These two activities will keep me warm. I have decided to follow above plan because I respect you and I love my dear kangaroo. 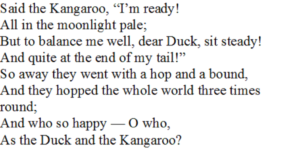 After knowing preparations made by the duck, kangaroo agreed to take duck on the world tour. They started their journey in the night. In the yellow light of the moon, everything looked yellow. Kangaroo advised the duck that she should not move while sitting on him. Duck should sit towards the end of the tail of kangaroo. These two thing will help him maintain the balance. So kangaroo jumped a little and then took a big leap. They moved around the world three times. And who became happy. The duck and kangaroo both became happy.