Answer: A headmaster had this opinion about Einstein

Answer: His mother thought so about Einstein.

Answer: Einstein hated the regimentation of the school and often clashed with teachers. So he left the school for good.

Answer: Einstein was constantly at odds with some members of his  family and many people at the University of Zurich. Mileva always supported Einstein. Therefore Einstein saw Mileva as his ally.

Answer: These tell us that Einstein wanted to have some freedom in his life. Probably he wanted to do more than the prescribed curriculum. He had his own independent opinion. He tried to defend his thoughts. He liked those who supported him.

Einstein had secured the job of a technical expert in the patent office at Bern. While doing his duty, he was secretly developing his own ideas and theories. Probably he used to store his papers in the drawer of his desk. Thus he named it so.

Answer: In 1938 Nazis had discovered nuclear fission. They could have used it to make an atomic bomb. Einstein wrote a letter to US President Franklin Roosevelt to warn him about the destruction a nuclear bomb could cause.

Answer: Einstein was highly shocked by the extent of damage caused by these bombs. He wrote a public missive to United Nations. In it he proposed formation of world government. He started a movement to stop building up of arms and campaigned for peace and democracy in the world.

Therefore he is regarded as ‘world citizen’. 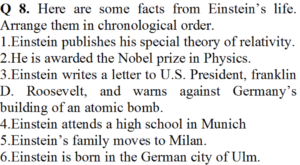 Answer: The correct sequence is described below –

6.  Einstein is born in the German city of Ulm.

10. Tired of the school’s regimentation, Einstein withdraws from school.

7. Einstein joins a university in Zurich, where he meets Mileva.

11. He works in a patent office as a technical expert.

9. He provides a new interpretation of gravity.

2. He is awarded the Nobel Prize in Physics.

12. When Hitler comes to power, Einstein leaves Germany for the United States.

3. Einstein writes a letter to U.S. President, Franklin D. Roosevelt, and warns against Germany’s building of an atomic bomb.

Answer: in a state of commotion 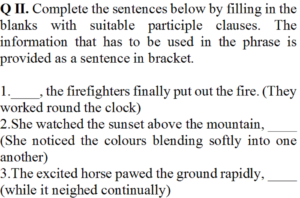 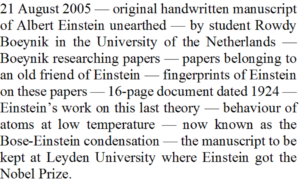 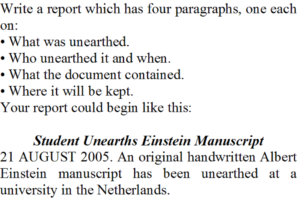 These papers have been found by Rowdy Boeynik, who is a student in the University of the Netherlands. While doing his research, Towdy Boeynik chanced upon some papers possessed by the family of an old friend of Einstein. These hand written papers is a set of 16 pages and has signature of Einstein at the end of the document.

In these papers Einstein has described behaviour of atom at low temperature. This is one of his last works in field of physics. These days this theory is known as Bose-Einstein theory.

THE LAKE ISLE OF INNISFREE

Answer: Innisfree is a calm and peaceful place in the lap of nature.

Answer: He wants to  build a small house of clay and wattles, grow nine rows of beans and rear honeybees.

Answer: He sees mornings veiled under clouds, twinkling stars during nights and a purple glow during afternoons. In the evening he see linnet birds flying in the sky.

He hears sound of singing of cricket.

Answer: Even while the poet is far away, he hears low sound of water lapping by the shore.  This sound is core to his heart.

At the Innisfree Island, the surrounding is peaceful and calm. The environment is very close to nature.

Answer: Innisfree is an island in Ireland. So it is not an imaginary place, it is a reality.

Yes, poet fondly recalls his boyhood days when he had spent time at Innisfree Island. He wants to again live in that peaceful and natural abode.

Answer: Poet wants to describe the buzzing sound of honeybees. These have made their hive in the open space between the house and the fence. The buzzing sound is considered a loud sound. It indicates the calmness of the area.

Answer: Poet wants to describe the linnet bird flying in the sky in the evening. These are returning to their nests. It creates a beautiful scenery that provides peace to poet.

Answer: Poet wants to describe waves of sea water. The waves reaching to the shore creates a noise that pleases the heart of the poet.

Answer: By ‘peace comes dropping slow’ poet wants to say that peace and calmness comes gradually. Instantaneous change seldom happens. One needs to have some patience to achieve peace.

By ‘to where cricket sings’ poet wants to say that the environment is natural to support growth of living beings. Even the low sound of cricket can be heard. It implies that the area is free from noise pollution.