THE SUMMER OF THE BEAUTIFUL WHITE HORSES 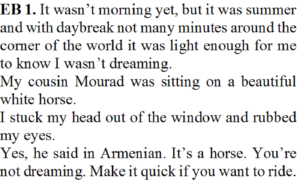 (i) Which of the following expression has not been used by the speaker to talk about the time of the day?

(a) it wasn’t morning yet

(b) daybreak not many minutes around

(c) it was light enough

(d) it was evening time

(ii) From which chapter above extract has been taken?

(c) The summer of the Beautiful White Horse

(d) The Tale of Melon City

(iii) Who was sitting on the horse?

(c) cousin of the speaker

(iv) What did Mourad say?

(b) You are not dreaming

(c) Make it quick if you want to ride

(v) The phrase ‘make it quick’ has been used in the extract. Which of the following is not correct use of ‘make it’ 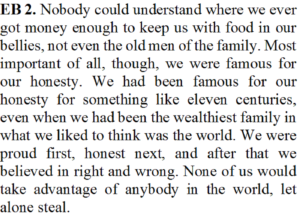 (i) What was the top most attribute of the society mentioned in the extract?

(ii) Based on above extract please classify following as facts or opinion.

(iii) The phrase ‘right and wrong’ and has been used in the extract. Which of the following phrase is not similar to it

(a) right and left

(b) poor and rich

(iv) For what period the society had been famous for their honesty.

(v) Who among the society were aware of their means of income? 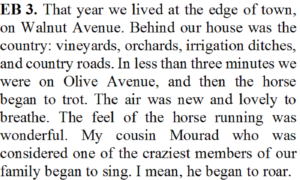 (i) Where did ‘we’ live during that year?

(c) at the edge of the town

(ii) When did the horse begin to trot?

(a) at Walnut Avenue

(b) at Olive Avenue

(c) at the vineyard

(d) at the orchard

(iii) How much time they took to reach Oliver Avenue?

(b) more than three minutes

(iv) What has been described about the air?

(c) it was lovely to breathe

(v) Which of the following existed behind ‘our’ house?

(vi) As per the extract who began to roar?

(i) What is name of the horse?

(ii) Which of the following activities was done by the horse when Mourad kicked the horse?

(iii) Based on above extract please classify following as facts or opinion.

(iv) The extract uses a phrase ‘that was the loveliest thing I had ever seen’. Which of the following is not the correct use of such an expression.

(a) that was the most funny movie I had ever seen

(b) that was best vacation I had ever had

(c) that was the best disease I had ever had

(d) that was the tastiest food I had ever cooked 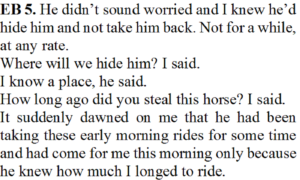 (i) Which word in the extract is synonym to ‘understood’

(ii) Based on above extract please classify following as facts or opinion.

(iii) The phrase ‘for a while’ has been used in the extract. Which of the following does not have the same meaning as this phrase?

(a) for the time being

(b) for some time

(c) for the sake of time

(d) for a short period

(iv) Why did they want to hide the horse?

(a) they did not want to be noticed

(b) they wanted to again ride the horse

(c) they had stolen the horse

(d) they wanted to sell the horse 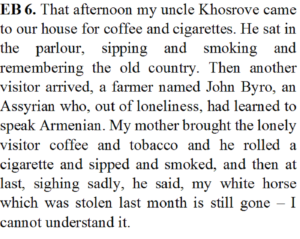 (i) Who is referred as ‘lonely visitor’ in above extract?

(ii) What had John Byro lost?

(iii) Why did John Byro learn to speak Armenian?

(a) it was necessary

(b) he was feeling lonely

(c) he had a passion to learn languages

(d) uncle Khosrove had advised him

(iv) According to extract which of the following work was not being done by Khosrove?

(v) What was the profession of John Byro? 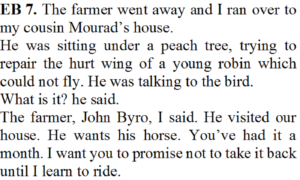 (i) Which of the following activities were being done by Mourad?

(a) sitting under a tree

(b) trying to repair the wing of a bird

(c) talking to the young robin

(a) John Byro had visted their house

(b) Mourad had the horse with him since last one month

(iii) Why did ‘I’ not want Mourad to immediately return the horse?

(b) ‘I’ wanted to learn horse riding

(c) ‘I’ wanted to protect Mourad

(d) ‘I’ wanted to keep the horse for himself

(iv) Based on above extract please classify following as facts or opinion. 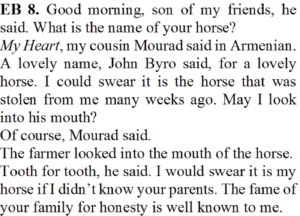 (i) To whom did John Byro addressed as ‘son of my friends’?

(b) Cousin of Mourad

(ii) What factors made John Byro to accept that ‘My Heart’ was not his horse?

(a) Words of two cousins

(b) John knew parents of the two cousins

(c) Families of two cousins were famous for honesty

(iii) Why did John Byro doubt that ‘My Heart’ was his horse?

(a) The horse looked similar to his horse

(b) Tooth for tooth “My Heart’ looked as his horse

(c) The horse had recognized John

(i) look into the well

(ii) look into the problem

(iii) look into the room

(iv) look into the desk

Answer: The tribe was famous for being honest. They were proud first, honest next and after that they believed in being right or wrong. None of them would ever take advantage of anybody leave alone stealing.

Answer: Aram stuck his head out of window and rubbed his eyes in bewilderment. Aram was sure that Mourad could not have bought the horse thus he had stolen the horse. He was so crazy about riding a horse that he went with Mourad for a ride.

Answer: He was an enormous man with powerful black head and largest moustache in the locality. He was impatient and would get irritated easily. He would always say – “It is no harm. Pay no attention to it”.

Answer: Author wants to say that people of his tribe had different characteristics. Mourad was the craziest of the lot while his father was a practical person. His uncle Khosrove was impatient and the farmer Jhon Byro was polite and humble. Aram’s mother was a considerate lady.

Answer: Aram kicked his heel into the body of horse. The horse stood on his rear legs and snorted. It ran down the road towards vineyard of Dikran Halabian. It leapt over seven vines. Aram fell down and the horse continued to run.

Answer: Uncle Khosrove was impatient and would get irritated easily. He would always say – “It is no harm. Pay no attention to it”. John Byro was a lonely farmer from Assyria. He was quite sad because of loss of his horse.

Answer: John Byro’s horse had been stolen. His surrey was of no use now. He had come there to gain sympathy but uncle Khosrove responded in his own irritable style. So John made an angry exit.

Answer: John Byro said this sentence when he had seen that tooth by tooth the horse resembled to his own. He wanted to believe that the horse was his own. But the fame of family of the boys prevented him from believing himself. He was sure about their honesty.

Answer: Mourad has been describes as the craziest member of the family. He enjoyed being alive. He believed in family values. He  had a great degree of self-confidence. He had inherited streak of craziness from his uncle Khosrove.

Answer: Aram said to himself that taking a horse for ride was not equal to stealing something such as money. It would not become a theft until we offered to sell the horse.

Through above argument Aram justified himself.

Answer: Aram had a passion for riding horse. Now he had a chance to ride horse. So he was happy.

Aram knew that Mourad could not have bought a horse so it was a stolen horse. Therefore Aram was frightened.

Answer: The horse had obeyed commands of Mourad. John confirmed that the horse had become better tempered.

The dogs in the vineyard did not bark at the two boys.

Mourad repaired a wing of robin and it could fly once.

Above are instances of confirmation.

Answer: Aram understood from the discussion that the horse they were riding belonged to John Byro.

Aram wanted Mourad to promise that he will return the horse only after Aram had learnt riding the horse.

Answer: When Mourad started riding the horse alone, he kicked his heels into the horse and shouted, Vazire, run. The horse stood on its hind legs, snorted, and burst into a fury of speed.

For Aram, this sight was the loveliest thing he had ever seen.

Answer: Khosrove was an enormous man with powerful black head and large moustache. He would always say – “It is no harm. Pay no attention to it”.

Once he was getting his moustache trimmed at a barber’s shop. His son came running to inform that their house was on fire. He uttered his regular reply – “It is no harm. Pay no attention to it”. Reminder from the barber that it was his own house, had no impact.

John Byro told Khosrove that his horse had been stolen. The response was to pay no attention to it. John told about his idle surrey and painful legs. His response was similar. So John left the house in anger slamming the main door.

John narrated that his horse had come back to him. Khosrove again advised not to pay attention to it.

Above prove that Khosrove was a crazy person.

Answer: Time and again every sociologist, psychologist, educationist and even a common person has stressed upon the need to have excellent moral values among citizens of a nation. During this era of excessive social media, the same set of people have been talking about family bonding.

The story though written long ago stresses upon these very basics of society. Aram did not believe that Mourad could own a horse. The two boys owing to their passion about riding a horse did something wrong. But they could not dare to sell the horse.

Towards end of the story, a reference was made by John Byro to the prestige of family. The honesty of the family was praised by him. The boys immediately corrected their conducted to uphold values and prestige of their family.

Thus it is important to teach moral values and family traditions to children.

Answer: Mourad had stolen the horse which belonged to John Byro. For about a month he rode it alone. Then he invited his cousin Aram also to ride the horse. They both were crazy about riding a horse.

Initially they both rode the horse together. Then Mourad rode it alone. He was in complete command and the horse obeyed his instructions. But Aram could not control the horse. It ran towards vineyard, threw Aram off its back and ran away. Mourad found the horse.

Mourad used to hide the horse during day hours. They used to ride the horse only before rise of Sun. They did not want to be noticed by anyone.

Once the two boys ran into John Byro with the horse. John had recognized his horse but Mourad  denied that the horse belonged to John. However John made a reference to family of boys being honest. Then Mourad secretly returned the horse to John.