Answer: The present route to Mount Kailash is a part of the earlier route through which trade between China and other countries of the world particularly of Asia and Europe happened. The main commodity traded was silk. Hence this route even today is known as silk route.

The author has described his journey through the same route. Thus he has named this article as Silk Road.

Answer: Mastiffs are big fierce dogs. They are brave not afraid of anything. They respond very quickly and run very fast. Therefore these were deployed in the imperial courts as hunting dong.

Answer: Two earlier visitors, a Japanese and a Swede, were highly impressed by the beauty and sanctity of the place. Both could not control their emotions and had burst into tears.

However the Hor village of present day was full of filth along its plains. There was no vegetation just spill of dust and rocks. Lot of refuse was liberally scattered.

Thus the experience of author at Hor was in stark contrast to earlier accounts of the place.

Answer: While walking in the town, which was full of rubbish dumps, author caught cold. He felt difficulty in breathing and could not sleep properly. He had to go to a hospital where he was given Tibetan medicines. This cured him.

The town was dusty, derelict and full of rubbles and refuse. There was only one rudimentary café. No other pilgrims had arrived there. Author was the lone pilgrim and he did not want to undertake kora alone.

Thus author was disappointed with Darchen.

Answer: The author was the only pilgrim at the Darchen for some time. He did not want to go alone to complete the kora. He had read many books about being positive but he did not see any such thing happening.

After many days a person by the name of Norbu met him at Darchen. He offered that they both could form a team and proceed further to complete the kora.

At this point, author remarked that his strategy of being positive finally worked to his advantage.

Answer: The author is professor at Oxford University. He liked to visit places for adventure. The author wanted to complete the pilgrimage to Mount Kailash and Manasarovar Lake. This is called kora.

Answer: While walking through  Darchen town , the author caught cold. It became difficult for him to breathe. He could not have a good sleep. He had to get up several time to catch some breathe. But as soon as he lay down the trouble again started. He felt as if he would not survive. So he again sat up.

Next day he went to a hospital. The Tibetan doctor gave him some herbal medicines that were stuffed in fifteen screws of papers. After a full day course, author felt relieved and had a sound sleep in the night.

Answer: While sitting in the café at Darchen, author met Norbu. He sat at the table where author was sitting. Soon they started conversation. Norbu told that he had been writing academic papers about kora and its importance. This time he had come to do the kora. Author was delighted and told Norbu about his intention of doing kora

They both formed a team, hired yaks to complete the kora.

Answer: Tsetan drove author in his vehicle from Ravu to Darchen. He had helped author get warmer cloths at Ravu. During the journey Tsetan drove carefully and skillfully through the difficult and varied terrain. He took all precautions to cross snow lying on the road. They took lunch at Hor. Tsetan got tyres fixed in this town.

They reached Darchen in the evening. Author developed some difficulty in the breathing. Next morning Tsetan took author to the hospital. He stayed at Darchen for one more day till author felt better.

Answer: This statement was made by Tsetan when the author had fallen ill at the town of Derchan. Tsetan took good care of author.

The first part of this sentence represents the Budhhist philosophy. According to it everyone who is borne has to someday die. Therefore one should not have too much attachment with physical aspects.

The second part of the statement indicates commitment of Tsetan to his duties towards his customer. Success of every visitor is gauged by his / her safe return. Any untoward incident may cause decrease in number of visitors. Such situation will affect livelihood of people of the area.

Talking about the text

(a). They give a sound advice to visitors and try to help. Lhamo advised author to take some warmer cloths. She gave him a full sleeve sheep skin coat

(b). They are very good guides. Tsetan guided the author correctly

(c). They are very skillful in their work. Tsetan was a skillful driver

(d). They are good human beings. Tsetan overstayed in Darchen for a day till the author recovered from his sickness

(c). Many times it is the instinct of knowing the unknown

(d). Sometimes it is to get away from hustle and bustle of routine

(e). Many a time it is to do something different and unique

(a). Things have changed since the earliest description

(b). Now more crowd at such places

Answer: Tsetan is using short sentences; These sentences are grammatically not accurate. However these convey the meaning without any ambiguity.

It appears that Tsetan had not received any formal education in English. He had picked up this language through his interaction with tourists.

The speaker is aware that the listener does not understand English. Daniel is the person who knows English as well as the language the listener understands. Daniel translates words of speaker and conveys to the listener.

The speaker is aware that the listener does not understand his language Tsetan is the person who knows English as well as the language the speaker speaks. Tsetan translates words of speaker and conveys to the listener.

Kora – Pilgrimage to Mount Kailsh is known as kora. It includes doing a complete round around Mount Kailash.

Drokba – It means a shepherd. One who rears sheep. They do not stay at one place. They are nomads who keep moving from one place to another.

All these words have been taken from Tibetean language.

snow-capped mountains gathering on the horizon

the sun shone brilliantly in a clear blue sky

a valley where the river was wide and mostly clogged with ice, brilliant white and glinting in the sunshine

The trail hugged its bank, twisting with the meanders

a vision of the Himalayas, commanded by a huge, snow-capped mountain, Gurla Mandhata, with just a wisp of cloud suspended over its summit 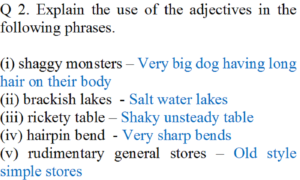 Answer: The poem has universal meaning. In several homes a communication gap or variation in thought process gets created between younger members and elder members. Initially members are not concerned about it. But later the pinch in felt both by elders and youngsters.

These aspects bring about helplessness of the father.

I do not understand this child

I know nothing of him,

He speaks: I cannot understand

Answer: This poem does not follow a fixed pattern. The rhyme scheme is open verse type.