THE HUNDRED DRESSES -I

1. Who is referred as ‘She’ in the above extract?

2. Which word in the extract mean ‘dragging’?

Answer: Wanda did not have any friend in the class.

4. What was the room number of the class?

1. Where did Peggy and Maddie sit in the class?

Answer: They sat in the front row

2. Who was the best friend of Peggy?

3. Which word in the extract is antonym of ‘ignore’?

4. Who was the most popular girl of the school?

2. Which phrase in the extract means ‘did not fit properly’?

Answer: Miss Mason is a teacher in the school.

2. What was the answer of Wanda to the question asked by Peggy?

Answer: Wanda replied that she had hundred dresses.

3. Which word in the extract is synonym of ‘polite’?

4. Which game little girls used to play in the school?

1. Which word in the extract indicates that Peggy and Maddie were close friends?

2. What game had Peggy thought of?

Answer: Peggy had thought of the game of asking Wanda how many dresses she had.

3. Which word in the extract is antonym of ‘initially’?

4. How many students walked with Wanda to the school?

2. Which word in the extract is synonymous of ‘wisdom’?

Answer: Maddie would not like her classmates to start teasing her.

4. Who boasted of having hundred dresses?

2. Which word in the extract mean ‘to hide’?

3. Why did Maddie’s mother decorated the old dress?

Answer: She did not want anybody in the class to recognize that her daughter was wearing one of the old dresses of Peggy.

4. Who was the poorest among Peggy, Maddie and Wanda?

1. Where did Wanda live?

2. Which word in the extract means ‘rarely’?

3. What was the only thing Wanda talked about?

Answer: Wanda talked only about her hundred dresses.

4. Who is the speaker of above extract?

Answer: Miss Mason, the teacher of the class, is the speaker of above extract.

2. Name the girl referred as ‘one girl’ in above extract.

3. Which word in the extract is synonym of ‘deserving’?

4. Who was the winner of contest among boys? 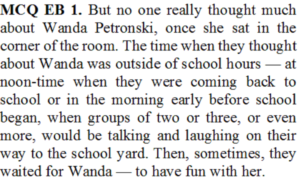 (ii) According to extract, when did ‘they’ think of Wanda?

(a) before school began

(b) coming back to school at noon-time

(iii) Based on the extract please classify following as fact and opinion?

1. Other students used to make fun of Wanda.

2. I believe Wanda was a brave girl.

3. Some must have been friendly to Wanda in the school.

4. It can be inferred that some students were gregarious.

(v) A phrase ‘on their way’ has been used in the extract. Which of the following is not the correct use of this phrase

(a) on their way to success

(b) on their way to Australia

(c) on their way to home

(d) on their way to dawn 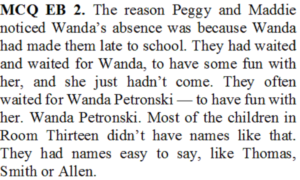 (i) In your opinion what does ‘Room Thirteen’ represent?

(ii) Peggy and Maddie blamed Wanda for making them late to the school, while they themselves had decided to wait for Wanda. Which of the following proverb does not describes such an act?

(a) when you judge others, you define yourself

(b) before you blame others, look into the mirror

(c) before pointing finger make sure your hands are clean

(d) when you are strong, help the weak

(iii) Based on the extract, what can be said about the name Wanda Petronski?

(iv) A phrase ‘most of the children’ has been used in the extract. Which of the following is not the correct use of such a phrase

(a) most of the sheep

(b) most of the cars

(c) most of the animals

(d) most of the house

(v) Based on the extract, which of the following cannot be inferred

(a) Peggy and Maddie were friends

(c) On one occasion Peggy and Maddie waited longer for Wanda

(d) Peggy and Maddie were friends of Thomas

(i) How did Peggy justify teasing of Wanda?

(a) Wanda was cruel

(b) Wanda had hundred dresses

(d) Wanda did not speak the truth

(ii) Why would Peggy cry for hours ?

(a) when an animal mistreated somebody

(b) when an animal disobeyed somebody

(c) when somebody mistreated an animal

(iii) Based on the extract, which of the following is / are not true?

2. Peggy had a soft heart too

3. Peggy was justified in teasing Wanda

5. It is good to protect small children

(iv) Which of the following attributes is not likely to be a quality of Peggy?

(v) Which if the following is not an antonym of ‘cruel’ 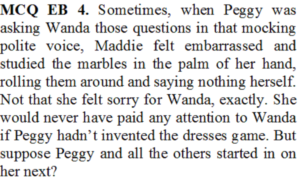 (i) Which of the following emotions is represented through the phrase ‘studied the marbles in the palm’?

(ii) What was the fear of Maddie?

(a) Peggy and others could break their friendship

(b) Peggy and others could start teasing her

(c) Peggy and others could run away

(d) Peggy and others could decorate the classroom

(iii) Based on the extract, which of the following is / are not true?

1. Maddie had sympathy towards Wanda

2. Maddie was a brave girl

3. Peggy had invented the dress game

5. Wanda was a friend of Peggy

(iv) Which of the following word as used in the extract is synonymous to ‘unreal’? 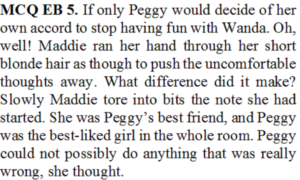 (i) What might have Maddie written in her note to Peggy?

(d) What you do is none of my business

(ii) How did Maddie console herself?

(a) Peggy was her best friend

(b) Peggy was the best-liked girl in the class

(c) Peggy could not do anything wrong

(iii) Based on the extract, please categorise the following into facts and opinion.

1. Maddie had sympathy towards Wanda

2. I guess Peggy too had short hair

3. Maddie was the best friend of Peggy

4. Had Maddie told Peggy, she would stop teasing Wanda

(iv) Which of the following word as used in the extract is synonymous to ‘complete’?

(v) based on the extract, which of the following was the greatest desire of Maddie?

(a) To be a friend of Peggy

(b) To be a friend of Wanda

(c) To push the uncomfortable thoughts away 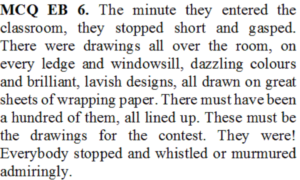 (i) ‘The minute they entered the classroom’. Who is being referred to as ‘they’ in this part of the sentence?

(a) Peggy and Wanda

(b) Peggy and all other students of class

(ii) Which of the following has not been used to appreciate the quality of drawings?

(d) none of above

(iii) Based on the extract, please categorise the following into facts and opinion.

1. Everybody was pleasantly surprised to see drawings.

2. It must have been a herculean task to exhibit these drawings.

3. Those were the drawings for the contest.

4. The principal of the school inaugurated the exhibition.

(iv) ‘There must have been a hundred of them’. Based on this part of the sentence what can you infer about number of drawings?

(d) not more than hundred

(v) Which of the following word / phrase as used in the extract is a synonym to ‘whispered’?

Answer: Peggy would very politely ask about number of dresses Wanda had. She would then ask about colour and type of cloth of dress. Wanda used to reply that she had hundred dresses of all colours and of velvet.

After Wanda had walked away all girls used to laugh at her.

Answer: Wanda is a poor girl. She is very calm and quiet. She does not have any friend in the school.

Answer: Actually Wanda did not have hundred dresses. She had only one dress that she wore every day.

Answer: Maddie did not like Peggy making fun of Wanda. But she did not have courage to tell this to Peggy. So she wrote a note.

Maddie feared that Peggy might start making a fun of her also. She wanted to avoid such situation. Hence she tore the note.

Answer: Wanda was a calm and quiet girl. The other girls used to tease her and make fun of her. None of the girls was her friend.

Therefore she did not sit with other girls but sat in the corner seat of the class.

Answer: Peggy was the most popular girl of the school. She was pretty, had curly hair and many pretty clothes. She was good at drawing.

Maddie wished that Peggy should stop making fun of Wanda.

Answer: Maddie was herself a poor girl. She usually wore hand-me down dresses. Wanda was also a poor girl. Maddie could easily understand her situation. She had sympathy towards Wanda.

Hence Maddie did not like Peggy making fun of Wanda.

Answer: Maddie and Peggy stopped short and gasped because there were drawing all over the class room. The drawings were on ledges and window sills. The drawings were brilliant, of dazzling colour and lavish design. They all were drawn on wrapping papers.

Answer: Wanda is a poor girl. She always wore one dress in the school. In order to avoid embarrassment, Wanda tells that she has hundred dresses. They laugh at her answer. This becomes a game for them. But Wanda considers this a daily torture.

In real life we come across such situations. Students from rich family make fun of poor students. Some students become part of this just to avoid embarrassment for themselves.

Social inequality prevails everywhere in the society. Parents should teach their kids about human values. Teachers should support equality in schools. Better aspects of being a good friend should be taught. Various competitions should be organized in school to bring about talent of every student. Thereby a message can be given that every student is not good at everything but every student is good at something or the other.

Such initiatives would help strengthen human values, mutual respect and companionship among students.

Answer: Maddie was herself a poor girl. She could easily understand difficulties of Wanda. She could also empathize with Wanda. But she did not dare to lose friendship of Peggy. Nor she wanted to become the next target of her friends.

Being a friend has a lot deeper meaning than merely being a companion. A real friend is one who is able to identify strength and weakness of his friend. He also has the courage to politely point out area of improvement and stop his friend taking a wrong direction. It may require several discussions before one realizes his wrong doings.

Friendship is a matter of mutual respect. Friends do not bully each other. Thus fear of losing friendship because of difference of opinion is ill founded. A healthy discussion is of mutual benefit.

Such values should be taught by parents at home and teachers in the school.