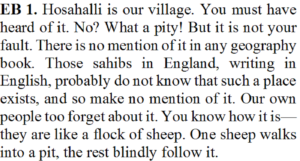 (i) Does author expect people to know about his village?

(c) author does not know

(ii) Who is being referred as ‘our own people’?

(b) people of Hosahalli

(iii) According to the extract, in which language books of geography were written?

(iv) Based on the information provided in the extract, please classify following as facts or opinion.

(b) there is no evidence of it

(c) there is no proof of it 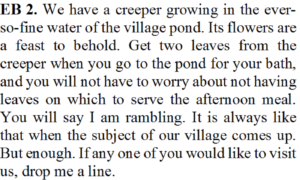 (i) Author appreciates which of the following

(a) quality of water in the pond

(b) size of flowers of creeper

(c) quality of leave of the creeper

(ii) How are leaves of the creepers used?

(iii) When did people normally collect leaves from the pond?

(a) when they went to fetch water

(b) when they went to take bath

(c) when they went to bathe animals

(d) when it pleased them

(iv) What does the phrase ‘drop me a line mean’?

(a) reduce one line from me

(b) write me a letter

(c) throw one line towards me

(d) add one line to my another line 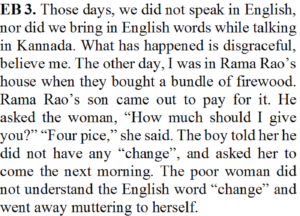 (i) Which of the following could have been the native language of the people?

(ii) Which of the following used to happen during ‘those days’?

(a) we did not speak in English

(b) we did not mix English language to our native language

(c) we used Kannada for communication

(iii) What did the boy not have?

(a) money in larger denomination

(b) money in smaller denomination

(c) money in his pocket

(d) money in his purse

(iv) Which of the following activities was not done by the woman?

(a) she asked the price for the firewood

(b) she did not understand the meaning of ‘change’

(c) she went away

(v) Based on the information provided in the extract, please classify following as facts or opinion. 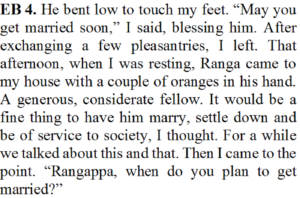 (i) Who had bent low to touch feet of the author?

(ii) Why had Ranga come to the house of the author?

(a) to have discussion about his marriage

(b) to inform that he did not want to marry

(c) to give oranges to the author

(d) to inform about his departure from the village

(iii) The author thought that Ranga was

(iv) The phrase ‘talked about this and that’ has been used in the passage. Which of the following is not similar to this phrase

(ii) had a tea table talk 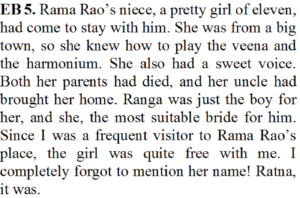 (i) Why did Ratna know how play veena and harmonium?

(a) she owned these instruments

(b) she was from a big town

(c) she was a musician

(d) she was from a small town

(ii) How was Ratna related to Rama Rao

(a) she was his daughter

(b) she was his cousin

(c) she was his niece

(d) she was his sister

(iii) Who used to frequently visit house of Rama Rao?

(iv) Based on the information provided in the extract, please classify following as facts or opinion.

(v) Which word used in the extract is synonym of ‘regular’ 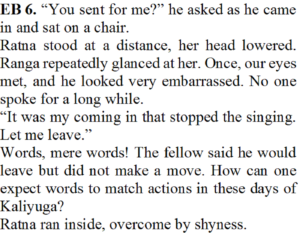 (i) What is the meaning of the phrase ‘sent for me”?

(c) threw me back

(ii) Whose eyes had met each other’s?

(a) Ratna and Ranga

(b) Ranga and author

(iii) Who offered to leave from the place?

(iv) Who moved away first from the place? 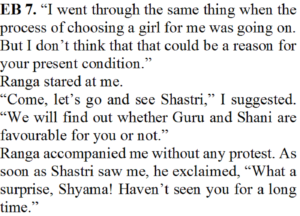 (i) Who had experienced the similar feelings as that of Ranga during chosing bride for himself?

(ii) Who are Guru and Shani as referred in the above extract?

(a) two persons residing in the village

(b) two persons residing in the town

(iii) Who recommend whom to meet Shastri?

(a) Author to Ratna

(b) Ratna to Ranga

(iv) Whose name is Shyama? 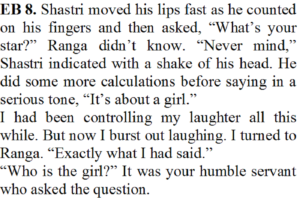 (i) Why Shastri moved his lips and counted on his fingers?

(a) he was memorizing tables

(b) he was doing some calculations

(c) he was reciting bhajans

(d) he was counted number of clouds

(ii) ‘What is your star?’ What does the word ‘star’ mean in this sentence?

(a) star of the ocean

(b) star with Ratna

(iii) Why was author controlling his laughter?

(a) he did not want to annoy Shastri

(b) he did not want to annoy Ratna

(c) he did not want Ranga to have any suspicion

(iv) Who has been referred as ‘your humble servant’ 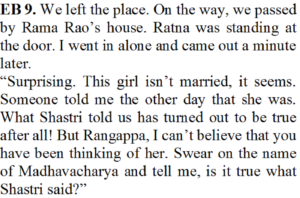 (i) ‘We left the place.’ Which ‘place’ is being referred to in this line?

(ii) Who went in the house of Rama Rao?

(iii) What confirmation was conveyed to Ranga by the author?

(a) Rama Rao was not at home

(b) Author had met Rama Rao

(c) Ratna was not married

(iv) Which of the following were told by the Shastri?

(a) Ranga had been thinking about a girl

(b) Name of the girl could be Ratna

(c) None of the above

Answer: During those days people of Hosahalli village did not send their children for higher education. They did not appreciate English language. Against this background, the accountant had sent his child Ranga to Bangalore for higher studies.

Thus the accountant was called man of courage.

Answer: In 18th century, during a war, many European soldiers were imprisoned in a small room. Many of them died due to suffocation.

In the text, many people gathered in the courtyard of Ranga’s house. But they did not go in the house thus avoided suffocation.

In this context, narrator has used the term Black Hole of Calcutta.

Answer: Ranga believed that marriage should happen only after the girl has matured. He did not favour marriage of young girls. He also did not believe in arranged marriages. He thought that a man should marry a girl he admires.

Answer: Villagers thought that after studying in Bangalore Ranga might have changed. They gathered at his house to clear their doubt. He appeared the same person.

One old lady moved her hand on the chest of Ranga. She noticed that he was still wearing the sacred thread.

Villagers concluded that Ranga had not changed at all.

Answer: Rama Rao’s son while speaking to an old woman in Kannada had used the English word ‘change’ . The woman nor the narrator could understand this word.

Author considered this incident and use of English words while speaking Kannada as disgraceful.

Answer: While saying namaskar to the narrator, Ranga bent low and touched feet of the narrator.

The boys of present new generation used to keep their heads up, stand stiff and jerk their body like a wand or a walking stick.

Answer: Ranga first saw Ratna at the house of narrator.

The narrator had asked mother of Ratna to send her to his house to collect buttermilk. In the meantime narrator sent for Ranga to his house. Ratna was singing a song. Ranga carefully peeped in and  saw Ratna singing the song.

Answer: The astrologer predicted that Ranga had been thinking about a girl and that Ranga wanted to marry that girl. He also said that name of the girl probably was a pearl or a ratna. He predicted that the discussion about their marriages would be successful.

Answer: After marriage, the couple was blessed with a son. They named the child Shyama after the name of narrator. They used to invite narrator for a dinner on the birthday of their son.

Answer: A modern boy while doing ‘namaskara’ does not bend to show respect. He would look in another direction and jerk his body like a walking stick.

Thus Ranga’s way of doing ‘namaskara’ was different from that of any other boy of present day.

This is ‘different now’ in the village.

Answer: The author is talking about his own village Hosahalli.

The village was situated in Mysore State which is now known as Karnataka. It was not mentioned in books of geography or indicated on any map.

The village had some mango trees. Mangoes of these tress were famous for their sourness. In village pond some creepers with big leaves used to grow.

Village had a very simple life. Villagers used to have bath in the village pond. Food used to be served on leaves. Firewood was used as fuel to cook food.

People were not highly educated. Village had a doctor, an accountant and an astrologer. People believed in old traditions. Villagers gathered at the house of Ranga to see him after his return from Bangalore.

Thus it was a small traditional village.

But the narrator was determined to get him married. He thought Ranta, niece of Rama Rao could be a good match for Ranga. He requested Ratna’s mother to send her to his house to fetch buttermilk. He requested Ratna to sing a song. In the mean while narrator sent for Ranga. While entering the house, Ranga heard the song. He peeped into the house. He saw Ratna singing. He fell for her.

Later narrator took Ranga to an astrologer. The astrologer predicted that Ranga had been thinking about a girl. Name of the girl probably started by name of a pearl or ratna. He also said that discussion for marriage of Ranga with that girl would be successful.

After return of Ranga from Bangalore, narrator had gone to the house of Ranga. There Ranga had said namaskar to him. Then Ranga bent his back and touched feet of narrator. This a clear sign that Ranga respected narrator.

When narrator sent for Ranga to his house, Ranga had come. When narrator advised Ranga to consult an astrologer, Ranga agreed. Later Ranga believed narrator that Ratna was unmarried. These  indicate that Ranga respected narrator.

After marriage the couple was blessed with a son. They named the child Shyama after the name of narrator. They used to invite narrator for a dinner on the birthday of their son. Thus Ranga continued to respect narrator even after his marriage.

Answer: The narrator considered Ranga the most eligible bachelor of the village. So narrator decided to arrange Ranga’s marriage.

Narrator requested Ratna’s mother to send her to his house to fetch buttermilk. He requested Ratna to sing a song. In the mean while narrator sent for Ranga. While entering the house, Ranga heard the song. He peeped into the house. He saw Ratna singing.

Narrator checked feelings of Ranga by telling that Ratna was married. The disappointment on the face of Ranga confirmed that he wanted to marry Ratna.

Narrator took Ranga to an astrologer. The astrologer predicted that Ranga had been thinking about a girl. The girl probably had a name starting with name of a pearl or Ratna. He also said that marriage of Ranga with that girl would be successful.