A BAKER FROM GOA

Answer: Elders in Goa are nostalgic about good old Portuguese days and the famous loaves of bread. They recall every incident of bakers.

Answer: The bread making is still popular in Goa. The author writes that sons of earlier bakers have carried the family tradition of bread making. They are called as ‘pedar’ in Goa.

Answer: Baker now is called as ‘pedar’ in Goa.

Answer: The baker used to come twice in a day. First in the morning to sell breads. Later he came with his empty huge basket.

The children used to run to baker to eat bread bangles.

Answer: A shirt and a trousers that would reach just below the knees

Answer: A person wearing trousers that reaches just below the knees is termed as being dresses like a ‘pader’.

It was a dress of a baker and bakers used to be called ‘pader’.

Answer: The monthly accounts used to be recorded on a wall in pencil.

Answer: Anybody who is round and plump is called having ‘jackfruit like appearance’.

Answer: Bread is indeed an important part of Goan life.

Answer: Coorg is situated midway between Mysore and Mangalore in Karnataka. It is the smallest district in Karnataka.

Answer: As one story goes, a part of Alexander’s army moved south along the coast and settled here when return became impractical.

According to another theory, people of Coorg are originally from Arab. This is supported because they wear a black coat with a waist belt.

Answer: People of Coorg are possibly from Greek or Arab origin. They are fiercely independent people. They are hospitable and brave people. Every house can recall story of valour of their forefathers. The first Chief of Indian Army, Gen Cariaapa was from Coorg. People of Coorg are the only people in India permitted to carry firearms without license.

Answer: Spices and coffee are main crops of Coorg.

The first route is via Mysore.

To keep visitors away

As one story goes

More than willing to recount

The most laid back individuals become converts to the life of 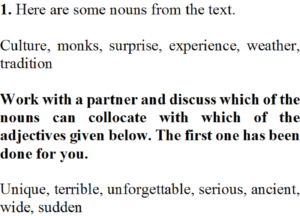 (i) A heavy downpour has been forecast due to low pressure in the Bay of Bengal.

(iii) My brother is responsible for the upkeep of our family property.

(iv) The dropout rate for this accountancy course is very high.

(v) She went to the Enterprise Company to attend a walk-in interview.

(i) The Army attempted unsuccessfully to overthrow the Government. (throw)

(ii) Scientists are on the brink of a major breakthrough in cancer research. (break)

(iii) The State Government plans to build a bypass for Bhubaneswar to speed up traffic on the main highway. (pass)

(iv) Gautama’s outlook on life changed when he realised that the world is full of sorrow. (look)

(i) a good detective serial on television? Interseting

(ii) a debate on your favourite topic ‘Homework Should Be Banned’? Interesting

(iii) how you feel when you stay indoors due to incessant rain? Bored

(iv) how you feel when you open a present? Excited

(v) how you feel when you watch your favourite programme on television? Interested

(vi) the look on your mother’s face as you waited in a queue? Boring

(vii) how you feel when tracking a tiger in a tiger reserve forest? Excited

(viii) the story you have recently read, or a film you have seen? Boring

Answer: Birds cannot live there, insects cannot hide there and there will be no shadow.

Answer: Meaning of sun’s feet is rays of sun.

Answer: The trees are in the house of the poet.

The roots are working throughout the night to disengage themselves from the cracks of veranda floor.

The leaves are pressing against the glass panes of window.

The small twigs have become stiff due to exertion of efforts.

Answer: Poet compares the branches of trees to newly discharged patients from hospital. Such patients move towards exit of the hospital in a state of confusion. The boughs of trees are shuffling under the ceiling to go out of the house to get some fresh air.

Answer: At the beginning of third stanza the poet describes that the complete moon is shining in the open sky.

Towards the end, poet describes the moon as pieces of broken mirror. Meaning that the moon is now visible in small parts.

Answer: When trees are moving out, there is a sound of glass panes breaking.

When trees have moved out, the house becomes silent. There is no noise or voice.

Answer: Poet thinks that movement of trees to outside environment or forest may not be valued much by human beings. Although growth of forest and greenery is important for human being, but they seem to neglect this aspect. Hence the poet does not mention it in her letters.

Answer: The poem is a conflict between man and nature. In the greed for comforts and pleasure man is destroying nature. At the same he understands that nature is so much important for him. But man has become so engrossed in himself that he has intentionally shut his eyes.

For his own pleasure man has brought wild animals into cage. Their natural abode forests have been destroyed by man. Thus both poem have a similarity.

The poet suggests that it is the need of the hour to plant more trees in the vacant land. Having decorative plants within the house is not sufficient. Free air and space is required for plants to flourish. In this sense the indoor plants also want to go out and breathe freely.

Answer: If trees were to represent human beings, we can infer a new meaning to the poem. Owing to constant pursuit of comforts man has become confined to his own house. The belongingness and social aspects have taken a back seat. Such condition has put lot of emotional stress on human beings. They want to unshackle it and emerge into free space to enjoy the nature.

If trees were to be taken as women, it gives yet another meaning to the poem. Since ages, women have been put under restriction and confinement. Personal growth and development have been denied to them. But thought process of women has now grown. They are now aware of their rights, freedom and abilities. Women of this era want to grow in the world hitherto denied to them.