LANDSCAPE OF THE SOUL 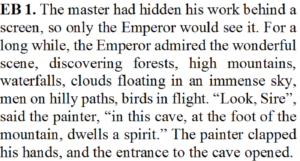 (ii) Which of the following was not seen by the emperor in the painting?

(iii) Who resided in the cave?

(iv) To open the cave, the painter

(v) The painting was seen by 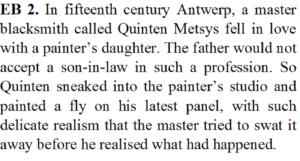 (i) The word ‘master’ in the phrase ‘master blacksmith’ mean

(ii) The phrase ‘such a profession’ refers to the profession of

(iii) Which word in the extract mean ‘entered without others noticing’?

(iv) Which of the following option represents the same person

(a) Quinten Metsys and father

(b) master painter and father

(v) What confused the ‘master painter’?

(c) picture of a fly

(vi) Which of the following is not the synonym of the word ‘delicate’ as used in the extract?

(i) What does the word ‘landscape’ mean in the above extract?

(a) shape of earth

(d) area of the field

(ii) Two modes of paintings being compared are

(a) European and Chinese

(b) Western and Eastern

(iii) Which painter wants to impose his views on the viewer?

(iv) Which painter wants to involve thought of viewer to appreciate his works?

(v) Which of the phrase is not similar to ‘borrow his eyes’?

(b) from a specific angle

(d) not meant to reproduce an actual view 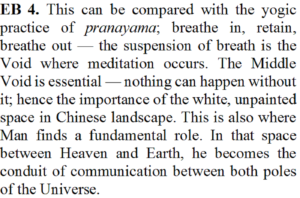 (i) What happen at the suspension of breath?

(ii) Which of the following is not a part of pranayama?

(iii) According to Chinese belief, where would man find a fundamental role?

(a) at the beginning

(c) during the life time

(d) at the middle void

(iv) Where does man becomes conduit of conversation?

(d) between heaven and earth

(v) In Chinese painting, the middle void is represented by which colour? 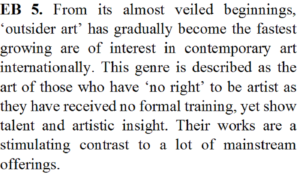 (i) Which word in the extract in similar to ‘slowly’

(ii) ‘outsider art’ is practiced by those who

(a) have worked outside their country

(b) have received education outside of their country

(c) have made artworks outside their country

(d) have not received any formal training

(iii) Which of the following is not an attribute of those who practice ‘outside art’?

(a) not received formal training

(iv) What is the meaning of word ‘offerings’ as used in the extract?

(v) Which of the word in extract mean ‘hidden’?

(i) Who has been referred as ‘untutored genius’ in the above extract?

(ii) The word ‘pardise’ as used in the extract refers to

(iii) What has been prominently used in creating Rock garden?

(iv) Where is Rock Garden situated?

(v) What existed earlier at the place where Rock Garden is now situated?

(vi) Which word in the extract is synonym of ‘promoting’? 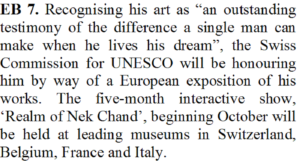 (i) The ‘Realm of Nek Chand’ will be held in which of the following countries?

(ii) Which institute will be honouring Nek Chand?

(iii) What is the duration of the show?

(iv) In which month the show will end?

(a) dies for his dream

(b) lives for his dream

(c) keeps dreaming about his dream

Answer: Wu Daozi had made painting for the Emperor. This painting was shown only to the Emperor. Wu clapped his hands and an entrance to the gate opened. Wu walked into it and the entrance closed. Immediately the painting also vanished.

Answer: Books of these two famous people narrate the classical education pattern of China. These played an important part in the education system of china. These books helped the master to guide his disciple in right direction.

Answer: One of the painter did not draw eyes of dragon. He had a fear that the dragon may become alive and come out of the painting.

He belonged to the western school of painting.

Answer: The blacksmith had fallen in love with daughter of a painter. The painter refused marriage because of his profession.

To prove his skill in the painting the blacksmith drew a fly on a panel in the studio of painter.

Answer: The horizontal scroll presents different sections of the landscape. Each section is different from the previous one. The viewer is thus able to see the painting in different time frame and different perspective.

Answer: Quinten Metsys , a blacksmith fell in love with daughter of a painter. But the painter refused the marriage because of his profession.

To prove his skill the blacksmith drew a fly in the studio of painter. The fly looked real. Thereupon the painter agreed for marriage of his daughter.

He did not receive any formal training in art. Inspite of this, he created sculputures with stone and recycled material. The world today knows his creation as the Rock Garden, at Chandigarh.

Answer: The painting of Wu Daoiz has a prominent place in the Chinese landscape.

Wu was sent for by an Emperor to make a painting. This painting was made on a wall of the palace. A curtain was put in front of the painting so that only the Emperor could see the painting.

The Emperor admired the discovering forests, high mountains, waterfalls and clouds floating in the immense sky. The painter told the Emperor, “ The inside is splendid. Let me show you the way”. He clapped his hands, an entrance to the cave at the foot of mountain opened. The painter entered into it. And soon the gate closed. The painting also vanished from the wall. The painter was never seen again.

This story emphasizes importance of inner life and spirit. The viewer is also an active participant of the landscape.

Answer: Nek Chand is regarded as an untutored genius who has created a paradise. Long ago he started clearing a little patch of jungle near Chandigarh. Here he installed sculptures created in stone. He also created a large number of sculptures using recycled material. Through his creative approach he proved that any broken or discarded material could be used for making art work. Collection of all these art work has become known as Rock Garden. Large number of people visit the Rock Garden.

Raw Vision, a UK-based magazine featured Nek Chand, and his Rock Garden sculpture ‘Women by the Waterfall’ on its anniversary issue’s cover. The Swiss Commission of UNESCO had honoured him by awarding an exposition of his works in Europe. A five month interactive show was held in museums of four countries under the banner ‘Realm of Nek Chand’. These two events made Nek Chand famous at international level.

Answer: The ‘raw art’ or the outsider art’ are the terms used for describing artworks created by people who have not had formal training in arts.

Nek Chand is regarded as an untutored genius who has created a paradise. Long ago he started clearing a little patch of jungle near Chandigarh. Here he installed sculptures created in stone. He also created a large number of sculptures using recycled material. Through his creative approach he proved that any broken or discarded material could be used for making art work. Collection of all these art work has become known as Rock Garden. Large number of people visit the Rock Garden. His work has been recognized at various forums at international level also.

Thus through his hard work and creativity Nek Chand made a significant contribution to ‘outsider art’.

The Voice of the Rain

Answer: who are you.

(ii) To whom does the word ‘which’ refer to in above extract?

(iii) Which poetic device is used in ‘voice of rain’?

(iv) Which word in the extract is synonym of ‘weird’?

(i) Who is referred to as ‘I’ in above extract?

(ii) Which word in the extract mean ‘from where’?

(iii) Explain ‘altogether changed, and yet the same’.

Answer: Water vapours are changed to water droplets. Yet the constituent is water.

(iv) What is the poetic device is used in ‘bottomless sea’?

(v) Which word in the extract mean ‘bathe’?

(vi) Which word in the extract mean ‘everlasting’?

(i) What has been referred to as ‘my own origin’?

(ii) Which word in the extract mean ‘inactive’?

(iii) What happens to earth when rain falls on it?

Answer: Rain originates from water bodies on earth and bottomless sea. The vapour rises high in the sky. There it gets converted into water droplets and fall to the Earth in the form of rain.

Answer: When seeds come in contact with water, they start germinating. Drought areas, atomies and dust layers on the globe become wet. Everything at earth becomes pure, beautiful and full of life.

Answer: The rain does its duty without bothering about recognition from anybody. Human beings should give importance to their duties.

The rain travels a lot and finally comes back to benefit its origin. Human beings should remain connected to their roots.

Hence it is called impalpable.

Answer: The rain rises from water bodies. It changes its form to water droplets up in the sky. Then it descend on the Earth to germinate seeds, to lave droughts, atomies and dust layers of the globe. The rain does its duty without bothering about recognition from anybody. Human beings should also give importance to their duties. This should be irrespective of the credit being given or denied.

The rain starting from its formation travels a lot. It rises above to great height in the sky. Travels a lot in the form of clouds. Finally descends on the earth to benefit its origin, to make it pure and beautiful. Human beings should remain connected to their roots. However high they rise in their career and life, they should remain connected to their roots,

Above two messages are given through the poem.