Answer: The ceremonies took place in an amphitheatre formed by Union Buildings.

In India Rashtrapati Bhawan and Red Fort at Delhi, Hawa Mahal at Jaipur are constructed in sandstone.

Answer: By ‘an extraordinary human disaster’ Mandela is referring to system of apartheid that was prevailing in South Africa. In this system people were discriminated on the basis of colour of the skin. Black people were denied human rights and honourable living.

By ‘glorious … human achievement’ Mandela means that the system of apartheid has come to an end. Now all people enjoy equal rights and facilities irrespective of colour of the skin. Now a black person has become president of South Africa which was not possible earlier.

Answer: He pledged to liberate all people from poverty, deprivation, suffering, gender and other discriminations. He promised that his country will never experience oppression of any person by another.

Answer: The military generals saluted Nelson Mandela to pledge their loyalty to him.

The earlier government was ruled by white people and there was discrimination against black people. After a prolonged struggle, that system had ended. Mandela had become the first president of democratically elected government. Hence attitude of generals also changed.

Answer: During those days South Africa had two national anthems. One for the white people and another for black people. At the inauguration ceremony both were sung to represent equality of both white and black people.

Answer: During first decade of twentieth century white people dominated the government. They had created a system through which black people were discriminated. They did not have any human right, facilities or access to respectable living.

In the last decade of the twentieth century the system of apartheid was abolished forever. Everybody had equal rights and freedom regardless of the colour of the skin.

Answer: To Mandela courage is not the absence of fear but the victory over it. A brave person is not the one who is not afraid but one who overcomes his fears.

Answer: Mandela thought that love comes naturally to every human being. But people need to learn to hate.

Answer: As a boy the freedom meant being free to stay out in nights, to read what he liked and to go wherever he wanted to. He considered these as ‘transitory freedom’.

Answer: Mandela thought that oppressor in truly not free.

His considered that one who takes away another person’s freedom is a prisoner of hatred. He is locked behind the bars of prejudice and narrowmindedness.

Answer: International leaders had come to witness the swearing-in ceremony of Nelson Mandela. They had come there to pledge their support to the end of racial system in South Afric

It signified the victory of justice over injustice, courage over fear and equality over inequality.

Answer: Mandela wanted to express his gratitude to the people who had fought to end the racial discrimination. He says that those people had great courage and had sacrificed a lot including their life during the struggle. Mandela is not able to thank them personally because they are not alive.

By saying that he is ‘simply the sum of all those African patriots’ Mandela means to say that he is representing all those courageous people who loved their country.

Answer: Yes, I agree that depths of oppression creates heights of character.

In South Africa, the oppression of black people had continued for many years. During such period people had suffered poverty and deprivation. Their suffering made them more determined to get rid of injustice. Thus the depth of oppression created heights of character.

In India, British people during their rule, had inflicted lot of injustice and inequality to Indians. Leaders like Chandrshekhar Azad, Bhagat Singh, Subash Chander Bose and Mahatma Gandhi fought against such oppression and got freedom for India. They were people of high moral character and strong determination.

Answer: As a boy the freedom meant being free to stay out in nights, to read what he liked and to go wherever he wanted to. He considered these as ‘transitory freedom’.

Answer: When Mandela joined African National Congress, hunger for freedom of his people became greater than his own freedom. The desire for the freedom of his people became goal of his life. He changed from a frightened person to a bold person, from a law-abiding attorney to a criminal, from a family loving person to a homeless person and lived his life like a monk. He started considering restriction on his people as restriction on himself. He fought for the cause of all the black and ultimately won equality for all. 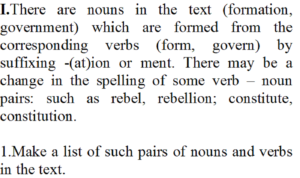 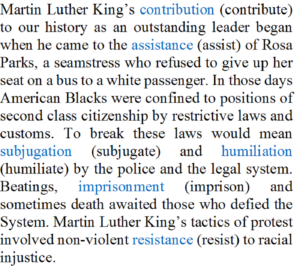 Answer: Mr Singh regularly invites people to his parties who are as famous as Amitabh Bachchcan and Shah Rukh Khan

Answer: History is not only the story of many other people like Alexander, Napoleon and Hitler but it is the story of ordinary people also.

Liberty actually means that one should be able to realise his potential and have equal opportunity to pursue his dreams.

Very often we see that people are struggling to make their two ends meet. They are not able to send their kids to school. They do not have adequate clothes. They yearn for freedom from poverty to lead a respectable life.

Many people are highly talented but fail to convert it into their favour. This is because opportunity is not available to them. They are deprived of taking education, coaching and training.

Unfortunately discrimination due to caste and creed still persists in our country. This results into many people remaining away from main stream of society. They also have dreams and want to lead a respectable life.

Everybody in the nation should have equal right and opportunity. Thus true liberty is freedom for poverty, deprivation and discrimination.

I. Looking at Contrasts 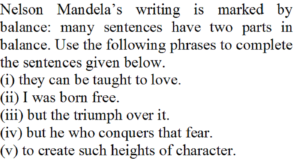 1. It requires such depths of oppression to create such heights of character.

2. Courage was not the absence of fear but the triumph over it.

3. The brave man is not he who does not feel afraid but who conquers that fear.

4. If people can learn to hate they can be taught to love.

5. I was not born with a hunger to be free. I was born free. 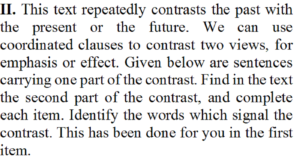 1. For decades the Union Buildings had been the seat of white supremacy, and now

2. Only moments before, the highest generals of the South African defence force and police … saluted me and pledged their loyalty. … not so many years before they would not have saluted but arrested me.

3. Although that day neither group knew the lyrics of the anthem …, they would soon know the words by heart.

4. My country is rich in the minerals and gems that lie beneath its soil, but I have always known that its greatest wealth is its people

5. The Air Show was not only a display of pinpoint precision and military force, but a demonstration of the military’s loyalty to democracy

6. It was this desire for the freedom of my people … that transformed a frightened young man into a bold one, that drove a law abiding attorney to become a criminal, that turned a family loving husband into a man without a home.

A TIGER IN THE ZOO

The effect is immense. It teaches us to represent different situation through the same word. The word is used to contrast the situation with that of emotions.

Thus in each set, a natural phenomenon is compared with helplessness and unnatural activity of keeping wild animals in zoo.