Once upon a time a man lived in a large farm. He used to rear animals for his living. He had a caring wife and a sweet lovely daughter.

One day, during their customary evening walk, the daughter noticed that a hen had come to their farm. It was hiding behind a bush. Daughter drew attention of her parents towards it. Mother brought it into their house. They fed it with grains and water. Soon the hen had gained strength.

One fine morning the daughter noticed something shining near the hen. Eagerly she took the shining piece to her mother. It was a golden egg.

But the man became greedy. He wanted to acquire huge wealth quickly. So he wanted to slit the hen to take out all the gold from it. His wife advised him not to do so.

But his greed had overcome the logic. One evening he slit the hen. Alas! He could not find anything. Now he lost the opportunity of getting one golden egg every day.

Two teams were warming up in our playground. It was the final match of inter-school football championship. Our school had reached final for the first time. We were up against the defending champion.

The referee blew the whistle. Match started. The opponent team was attacking our goal relentlessly. Our goal keeper made excellent saves. Till half time no team could score any goal.

The two captains were really tense. Play began after interval. During very first minute the opponent team scored a goal against us. This invigorated our team. One of our forwards was brought down by their defender in the penalty box. Referee awarded a penalty. We converted the penalty into a goal. Score one all.

Pace of the match increased. In last minute we earned a free kick just outside the penalty box. Our captain stepped up. Silence in the ground. Captain comes running and kicks the ball. It travels high, swirls, beats the goal keeper and gets into the net. Goal! Score 2-1 in our favour.

During the last minute we defended well. The referee blew the final whistle. All students entered the field. Large commotion everywhere.

What a memorable win indeed!! 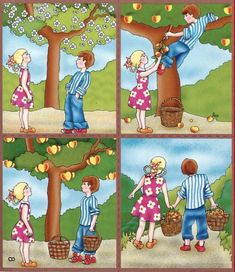 Help others to help yourself

In a small village two kids, a brother and a sister, lived with their parents. Their father was a farmer. Mother helped in farming besides taking care of house.

The siblings were studying in the nearby town. They used to commute every day on foot. They were intelligent and always scored highest marks in their respective class.

In the middle of their field was a mango tree. The girl was fond of mango pickle. During season, the tree was laden with flowers. Soon most of the flowers became small mangoes. Gradually they started growing and became large enough pieces.

The girl asked her mother if these can be plucked for preparing mango pickle. Mother put a condition that mangoes would need to be plucked by siblings without help of a ladder or a stick..