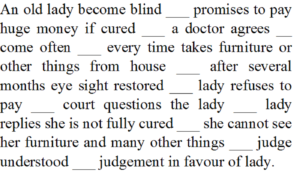 Vision of a Blind

An old lady suddenly became blind. She had not fallen sick nor was there any symptom of weak eye sight. She was a rich lady. She announce that she would pay an amount of Rs. 5 lacs to the doctor if her eyesight can be restored. Many doctors examined her eyes. Only one doctor agreed to cure her.

The doctor used to come every week to her house. He would prescribe new medicines and new eye drops to her. While returning from the house the doctor would take an article or a small piece of furniture with him.

After about five months doctor declared that eye sight had been fully restored. He demanded the award from the lady. But the lady refused to give award.

The matter was taken to the court. The judge asked why she was not paying the agreed reward to the doctor. The lady replied that her eye sight is not fully restored. She can say so because she is not able to see many pieces of furniture, articles and paintings in her house. The judge understood the message and sternly looked at the doctor. The doctor was looking at the floor. He had accepted his guilt.

The court gave judgement in favour of the lady.

Moral: Anyone can be outwitted by one’s own trick

It was a rare occasion that I was travelling alone to my college. We five friends used to travel together in the same train. But this time I had fallen sick so I stayed home for an additional week.

Within 30 minutes of start of train, ticket checker came asking every passenger to show ticket. When my turn came I confidently took out my purse and looked for ticket. But the ticket was not in the purse. I checked my all pockets. Ticket was nowhere.

TTE sternly looked at me and ordered to get down at the next station. I really got panicked. Time to next station was 15 more minutes. I called my father and explained him the situation.

My father had booked the ticket through IRCTC and had kept photocopy of the ticket. He sent me an image of the photocopy. But TTE refused to accept it. He demanded original ticket.

I sent an SMS to 139 with following text –  PNR<space> PNR number. Within couple of seconds I received an SMS giving details about my reservation.

I showed the SMS and my original ID proof to the TTE. He gave me a look of appreciation.

I thus continued my journey.

Moral: Know the rules of game. 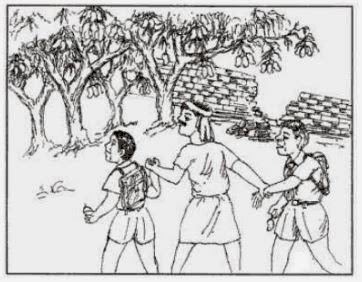 Sohan and Mohan were twin brothers. They both studied in class nine. Sohan excelled in studies while Mohan was an excellent sportsperson.

They used to walk together to their school along the main route. While returning from school they used to take a longer route. Along this route there were several stalls. They used to buy eatables from their pocket money. Sometimes there used to be many conjurers displaying various animals and birds.

Along the route was also an orchard. A wall had been built along its periphery. During summer season trees used to be laden with mangoes. They both liked this fruit. They would jump over the wall, pluck a mango each and walk away. Somehow the owner got suspicious about theft.

One afternoon he hid behind a bush and caught two brothers red handed. The owner threatened to inform their parents and school principal. They both started crying and promised not to come to the orchard again. The owner was impressed to learn their performance in academics and sports. He took pity and allowed them to go. However he gave them a warning to not to repeat such instance.

Moral: Always be truthful to your self.