Through the column of your esteemed newspaper I would like to draw attention of general public about the menace of social media.

Social media has taken advantage of popularity of internet and smartphones to spread its evil wings to almost every individual. Nowadays people of every age are glued to their phones to browse through social media like facebook, instgram, whatsapp , twitter and many more. Everybody has become addicted to social media. Half cooked stories and false news being spread is adversely affecting the very roots of society. Everybody feels lonely in spite of being member of several groups on these media.

Elders need to first disassociate themselves from social media to set an example to younger ones. We all should engage more in reading, playing and family gatherings. These activities would surly control the menace to a great extent.

I hope you would publish this letter in your newspaper to generate a wider debate on this evil. 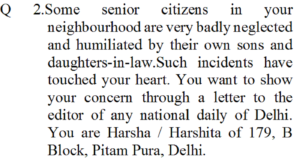 Through the column of your esteemed newspaper I want to talk about neglect of some of senior citizens living in our locality.

These are the people who had taken good care of their kids. They made sure that their kids receive best of this world. After acquiring academic qualifications they are well settled and have huge income.

It is a matter of shock that these very kids are now neglecting their parents. They do not take them to doctors when they are sick. Sometimes elders have to remain without food. Their son and daughters-in-law shout at them. These senior citizens do not get respect they fully deserve.

Every locality should form a senior citizen club so that elderly people can spend some quality time together. As a CSR activity hospitals should hold camps for senior citizens. In schools, more emphasis needs to be given on moral education.

I hope you would publish this letter in your newspaper. It will probably move hearts of some young ones to take better care of their parents and grandparents.