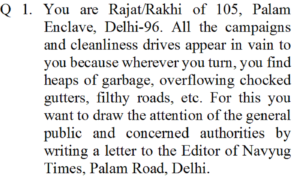 I am a resident of Palam Enclave. I am writing this letter to you to bring forth the unclean surroundings in our locality.

In our locality, the moment one comes out of the house, one can see filth littered along the roads. Every open space has been converted into a big heap of garbage. Most of the gutters are chocked and sewage water overflows to roads. It has become very difficult to walk without putting scarf on nose. It seems that even elected representatives of our locality have turned a blind eye to situation.

Local municipal authority should tighten their belts to quickly remove heaps piled up everywhere. Local public representatives should invigorate themselves to solve this problem. Also, residents on their own can mobilze some resources to reduce gravity of alarming situation.

I am hopeful that you would publish this article in your newspaper so that situation is brought to the notice of higher authorities.

Subject: Ban on sale of liquor

Through the column of your esteemed newspaper I would like to bring about sufferings of several families because of alcohol.

Several alcohol shops have opened in and around our locality. The staggering walk of people coming out of the shop is a horror. Most of these people appear to be poor people. I have seen several ladies coming to the shop and trying to drag their husbands and brothers from ditches to home. The fair gender and kids suffer a lot when family members are addicted to alcohol.

The ban on alcohol in many other states has brought relief to society particularly to weaker section. Our state government should also ban alcohol in the state.

I request you to publish this letter in newspaper. It will ensure wide publicity of ill effects of alcohol consumption. Your participation can surly provide relief to many sections of society.