WEATHERING THE STROM IN ERSAMA

(i) Why water had become angry?

Answer: Because of storm

(ii) Who is referred to as ‘his’ in above extract?

(ii) Which word in the extract is synonymous of ‘destruction’?

(iii) Around what time tree had fallen?

(iv) What parts of house was damaged by fallen trees? 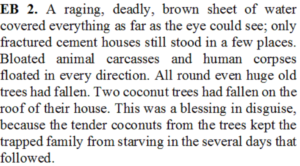 (i) What does the word ‘fractured’ imply in this extract?

(ii) Please name two things that were seen floating in the water?

(ii) To whom does the word ‘their’ refer to?

Answer: family of friend of Prashant

(iv) For how many days the family had to stay on roof of the house?

(iii) Which word as used in the extract is synonymous to ‘journey’?

(iv) What equipment did ‘he’ use to know depth of water?

Answer: Where water was waist deep

(vi) According to extract, what did ‘he’ do when he lost the road?

Answer: he had to swim

Answer: Prashant and two friend of his uncle.

Answer: They were going the their village Kalikadu

(iii) Which word in the extract mean ‘horrific’?

(iv) Which word in the extract has been used to indicate ‘flowing water’?

(v) How many houses ‘they’ saw in villages they passed?

(i) What was considered a miracle?

(iii) According to extract what is mother of mother called?

(iv) What does the word ‘they’ signify in the above extract?

(v) Which phrase has been used in the extract to imply ‘many people came to know’?

(i) How many house were not washed away in the village?

(ii) Which word in the extract is synonymous to ‘group’?

(iii) How old was Prashant?

(iv) What was merchant requested to do?

Answer: He was requested to give rice to people

(v0 What has been their food till third day?

(i) Why do you think it was difficult to ignite tree branches?

Answer: these were wet

(ii) What was to be cooked on that day?

(iii) Who had given rice?

(iv) Name any three things that were cleaned off in the shelter?

(v) Which word in the extract mean ‘to take care of’?

(i) Which sport was organized for children?

(iii) Who himself loved to play cricket?

(v) Which word in extract is antonym of ‘slow?

(i) According to extract, how much time has passed since the storm?

(ii) Which word in the extract mean ‘cured’?

(iii) To whom does people like to approach when in trouble?

(iv) Why could Prashant recover quickly?

Answer: he did not bother about his own pain

(v) What does the phrase ‘darkest hour of grief’ mean?

Answer: most difficult period of sorrow

(i) When did the storm start?

(ii) What two things Prashant had never seen about wind?

(a) colour and speed

(b) speed and fun

(iii) Even the ancient tree were –

(a) fought and floated

(b) uprooted and flew away

(iv) Which word in the extract is synonym of ‘filled’?

1. Speed of wind was very high

2. Prashant had measured speed of wind

3. Rains were heavy and continuous

4. People should have been moved away much sooner

(i) Against what the family of Prashant was to survive?

(ii) After how many days the rain stopped?

(iii) The only thought in the mind of Prashant was about

(a) stopping of cyclone

(b) survival of his family

(v) According to extract what is not true about Prashant

1. He was worried about survival of his family

2. Prashant wanted to meet his family

3. Prashant did not want to be an orphan again

4. Two years seemed to be two days to Prashant

5. None of the above

Answer:  Prashant was at the house of his friend. He had gone there to spend a day.

Answer:  Speed of wind was about 350 KMPH. Rains were heavy and incessant.  Flood water was rising and swirled around every house, trees, plants  and living beings.

Answer:  Prashant had spent the period of storm at the roof top of the house of his friend. The storm lasted about 36 hours though the speed of wind had reduced after about 12 hours.

Answer: Prashant stayed with the family of his friend for two days. These two days seemed equal to two years to Prashant.  He was worried about survival of his family.

Answer: The storm had lasted two days but this seemed to be two years to Prashant. He was worried about his family and he wanted to be with them.

So he started his journey to his village.

Answer:  Water was spread all around. He used a stick to know where the water was shallow. At many places water was waist deep so his progress was slow. Sometimes he had to swim. He had to push away carcasses and corpses.

With great difficulty he reached his village.

Answer:  After reaching village, Prashant noticed that his house had been destroyed. He went to a nearby shelter run by Red Cross. At first he met his maternal grandmother. His sister, brother, uncles and aunts were also there at the shelter.

Answer:   He persuaded the merchant to part with rice. This helped people living in the shelter to fill their bellies.

He organized cleaning of shelter premises of filth, urine, vomit and floating carcasses.

He arranged to tend to wounds and fractures of injured people.

Answer:  People collected some empty utensils. The children were asked to lay on the sand and keep empty utensils on their stomach. This way they tried to convey that they were hungry and in need of food.

This way they were able to draw attention of helicopter towards their needs.

Answer:  When Prashant reached his village his heart turned cold.

He saw that his house had been washed away. Only some parts of roof was visible. Some of their belongings were caught, mingled and twisted in the branches of trees just above the water level.  This was the cause of his feelings.

Answer:  A delegation of the people succeeded in persuading the village merchant to part with his rice.

Through a novel method, attention of helicopter was drawn to the needs of the people. There after helicopter started dropping food packets regularly.

Answer:  Prashant made a separate shelter for orphaned children. He organized sports events and cricket matches for them.

Answer:  During the storm Prashant and family of his friend had taken refuge at the top of the house. Two coconut tress fell on the roof. Tender coconuts served as food for the family, hence it was a blessing in disguise.

Answer: Eighty six people died in the storm. Ninety six houses were completely destroyed in the cyclone. Prashant’s house was also destroyed.  Some of the belongings could be seen caught, mingled and twisted in the tree tops just above the water level.

Carcasses of animals and human corpses were floating on water. Most of the trees had fallen down.

People had to shift to temporary shelters constructed by various authorities. They did not have enough food to fill their bellies. All means of business, farming and earning had vanished. Villagers were dependent on food-for-work programmes.

On emotional front too people had suffered because they had lost their near and dear ones.

Answer:  It is true that during difficult times true personality of a person emerges.

Leadership quality of Prashant was brought about during the cyclone. He had formed several groups for different tasks. This helped him handle many aspects together.

The skill of prioritization was easily visible. He first arranged for food and  then made more shelters. Later he motivated people to work to sustain life.

He could understand emotional needs of people. He engaged children in sports. He also formed foster families so that orphans and widows could live within the main society.

Thus Prashant had several qualities which were used for benefit of society.